Joh for PM: A Musical Comedy

Joh for PM is a show that demands attention. As a musical centred on a political figure, it is a rarity in Australian theatre; we need more of them.
Glyn Davies 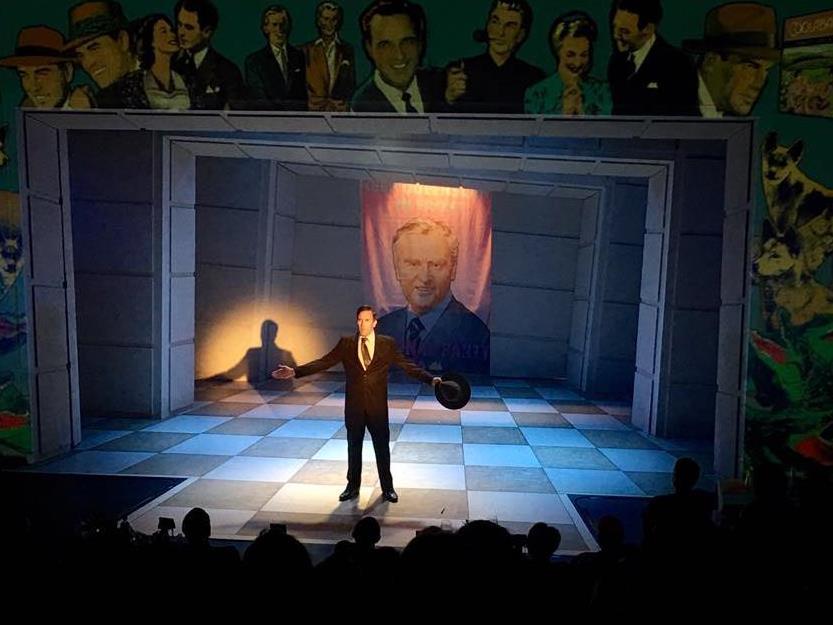 Colin Lane as Joh in Joh for PM. Photograph via Jute Theatre Company.

This show is a little beauty, if you’ll pardon the use of the vernacular. It’s appropriate, because the vernacular is the language of the protagonist in this carefully crafted musical Joh for PM is full of the idiosyncratic phrases and crooked metaphors which so endeared Joh to his supporters and so infuriated his detractors: ‘Don’t you worry about that’ and ‘feeding the chooks’ make frequent appearances in the dialogue.

The audience response to this generally-caricatured set of episodes in Joh’s political and family life is to hoot with delight at the satire, and then they are even more delighted when the Joh story reveals certain parallels with a more recent political clown, as Joh threatens to build a wall to keep the ‘southerners’ out of Queensland, and have Canberra pay for it; and he delivers ‘fake news’ at the behest of the Allan Callaghan character.

The show begins at a fundraiser for the Joh for PM campaign, and quickly slips into its series of episodes. First there is Joh’s life on ‘Bethany’, the family farm, where as a teenager desperate to deliver his family from debt, he shows that he is not afraid to work hard for long hours, all the while polishing his Christian fundamentalist world view by teaching Sunday School in his father’s Lutheran church.

Then there is his rapid accession, first to the Queensland Parliament, then to the Ministry, then to the Premiership upon the fortuitous death of Jack Pizzey. It all just falls into place around him. In 1971, when anti-apartheid demonstrators challenge the South African rugby team’s tour, he declares a state of emergency to allow the team to play at the Ekka showgrounds in Brisbane. He also makes a deal with the Queensland Police Union that gives them free rein to attack the anti-apartheid protesters outside the Tower Mill Motel, thereby starting a pattern of repression that will earn Queensland the reputation of being a police state for the next two decades.

Queensland, he declares, is ‘different’ and Joh trades on that belief, using it to demolish death duties, and to explain his deals with the big mining companies and later the ‘white shoe brigade’ from the Gold Coast.

As his power grows, with each successive gerrymander, so too does his sense of self-worth; but it is to be pricked by a later power-broker, Peter Beattie, who meets him secretly at Bethany and winds up telling him that he suffers from ‘hubris’, and like his counterparts in Greek tragedy, is riding for a fall. That comes, not before time, with the report by Chris Masters on The Moonlight State, which leads to a Royal Commission into police corruption, the jailing of four ministers of the crown and the jailing of the Police Commissioner, no less.

Through all of this, Joh, as played very sensitively by Colin Lane, seems unperturbed, almost an observer of his other political self. Frequently, he stands to one side of the stage, looking on, with a bemused look on his face. It is as if Lane is inviting sympathy for a character we know to have been a monster.

As the episodes unfold, we meet other key figures in Joh’s entourage: Beryl, the pilot, makes one appearance, piloting Joh’s plane alongside Flo and Callaghan, while Joh’s federal nemesis, Gough Whitlam, is depicted on the backdrop, resting on a cloud. One of the most humorous episodes is the one in which Flo and Jo are out on a date, prior to Joh’s popping the question in the approved manner. Here, as elsewhere, Flo (Barb Lowing) takes the lead and the embarrassed Joh can only make single syllable answers. Barb captures the future Senator’s homeliness very well indeed. It is a quality which will infuse one of the toe-tapping songs in the show, ‘Pumpkin Scone Diplomacy’.

The two lead dancers, the vibrant Chloe Dallimore as Joh’s sister, and the show-stealing Kurt Phelan, as Allan Callaghan, are amazingly adept. To watch them is to be astounded that the human form can be so agile and precise. It is left to Stephen Hirst (Peter Beattie, and Chris Masters), and Simon Burvill-Holmes (Russ Hinge, RNA President, Frank Nicklin) to fill in a few cameo roles, which they do very well, all the time infusing their characters with a larger-than-life quality appropriate for the satire that is the basic tone of the show.

There are inevitable comparisons to be made with another recent political satire, namely Keating: The Musical. Stephen Carleton has done a wonderful job in creating the book, and with Paul Hodge, the man behind the catchy music in the show, has worked collaboratively on the lyrics which are clever and rhythmical. Yet those of us who can remember being politically perceptive at the time know that we are getting less than the whole picture of the man. Somehow the authors of Keating had a more appealing figure to work on, and the result is a greater sense of tragedy. Nevertheless, there is still a sense of satisfaction in seeing Joh off in1987, to be replaced at last by his state-based nemesis, Mike Ahern, the only member of Joh’s cabinet that had been to university.

Kris Stewart, as Director, is to be heartily congratulated on maintaining a clear satirical focus emphasising Joh’s foibles more than his flaws, thereby creating the continuing parade of hilarity that had the audience in stitches for much of the show. Anthony Spinaze’s set with its solid proscenium arch, as of a substantial government building framing the action within, was brilliant because its outer section did double duty as a screen on which numerous emblems could be projected, none more emblematic than a rain of falling bananas, reminiscent of Sean Lahey’s cartoon showing Joh in Nazi uniform with a pair of crossed bananas where one might have expected the swastikas. Paul Hodge’s catchy numbers made an appropriate vehicle to carry Dan Venz’s innovative choreography, so that the audience often felt as if the whole theatre was alive and jumping.

Joh for PM is a show that demands attention. As a musical centred on a political figure, it is a rarity in Australian theatre; we need more of them. As to the treatment it gives to Joh, well that, as I have been saying, is problematic. I can only echo the sentiments of one audience member who, as the last curtain call faded, uttered this verdict. ‘You know, I come from the opposite side of the political fence, yet by the end, I found myself becoming sympathetic to the poor old bugger’. Then he corrected himself, ‘No, not to Joh but to Colin Lane!’

Joh for PM: A Musical Comedy

By Stephen Carleton and Paul Hodge