MELBOURNE FRINGE: An ode to forgotten Australian classic songs, as covered by a house band accompanied by a host of revolving vocalists and guest musicians.
Zoe Rinkel
[This is archived content and may not display in the originally intended format.] 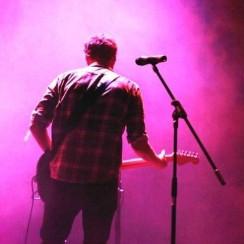 At Melbourne Fringe 2009, a fragile little seedling was planted – a cobbled together celebration of Melbourne’s live music scene titled About the Town, which encouraged performances of songs either about Melbourne or inspired by her. A year later the concept paid homage to its heavily influential forebears, naming itself Little Bands after Melbourne’s ‘Little Band’ scene of the late, punk 1970’s.

In 2011, only two years since its inception, that little seedling has bloomed and is thriving – its roots are deep in Melbourne’s rock-y soil, thirstily sucking up the creative juices of countless live acts gracing our city. This year’s production, Jewels & Bullets, dusted off forgotten B-sides and breathed life back into some of the ‘forgotten gems’ of Australian rock music.

So, for the third year in a row, Melbourne’s finest rockers peeled themselves off the Tote’s notoriously sticky carpets to entertain a room full of eager Fringe punters. The house band Buttered Loaf (on any other night one of Melbourne’s best funk/reggae bands) provided a beefy backdrop for an impressive parade of front men and women, including Charles Jenkins (Icecream Hands, The Zhivagos), Angie Hart, Molly Jean Morrison (The Level Spirits), Steve Clifford (The Hello Morning), Owl Eyes, and Rat vs Possom.

Quincy McLean (Blue Rain, SLAM) gave us a hot, bluesy rendition of Skyhooks’ ‘Love’s Not Good Enough’, claiming he never cared much for the song itself but always fancied the bassline as something special. How exciting it is to see a rather drab old work ressurected. Same goes for Paulie Stewart’s (Painters & Dockers) version of Sacred Cowboys’ ‘Nothing Grows in Texas’, renamed ‘Nothing Grows in Tanzania’ and backed by hip-hoppers FlyBz, who were apparently glad to be “doing something different for a change”.

Angie Hart’s meandering whisper led us through The Divinyls’ ‘The Good Die Young’, while Level Spirits singer Molly Jean Morrision took charge of things to tell us about singing age-inappropriate lyrics at blue-light discos in St Kilda, between amazing the crowd with her powerful and stunning vocals. Linda J from the Dacios ripped through ‘Clock on the Wall’ (by Louis Tillett in his Wet Taxis days), and Owl Eyes roused a well liquored crowd with Mondo Rock favourite ‘Come Said the Boy’.

The music was also accompanied by some fantastic video projections, mostly of the live action on stage, made that much cooler by high contrast effects and an almost moonlit background. The images had the feel of a raw one-take video clip, and added that extra something to the performance.

Thanks to Marcia Hines and Australian Idol, “making a song your own” has become a painfully cringworthy phrase, but there really is something gratifying about a cover done with equal parts respect and innovation. But beyond that, there is still pleasure to be found in the ephemerality of a show like this – something those old rockers from the 70s and 80s, so clearly revered by the Jewels & Bullets line-up, were particularly in tune with.