A sonic exploration of the magical worlds below the surface of our rivers.
Stephanie Reisch 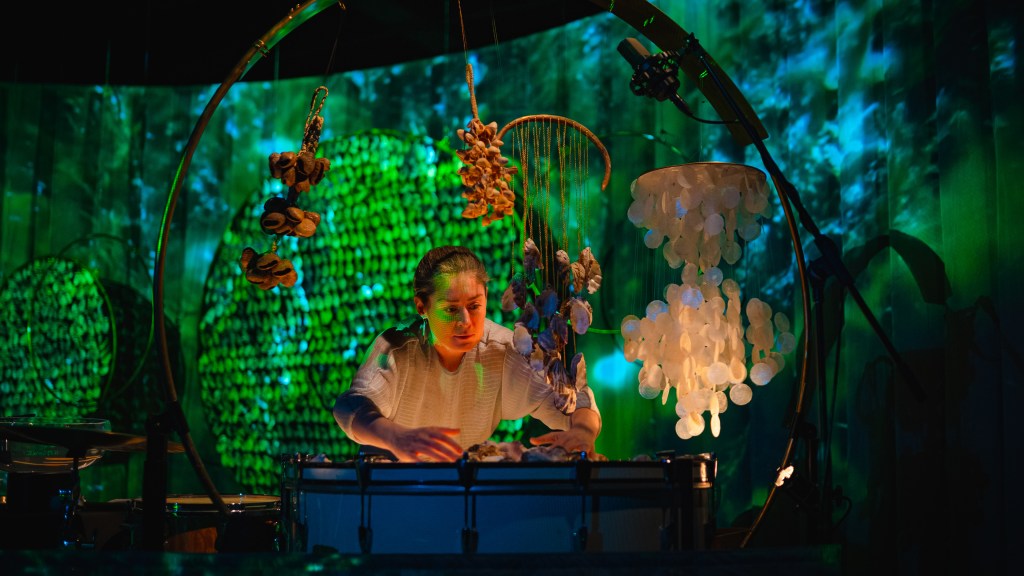 On most days of the year, Perth’s grand Derbarl Yerrigan or Swan River, is a moving tapestry of fractured sun rays dotted with ferries, yachts, paddle boarders, swimmers and water birds lazily scanning for fish. Intermingling with the never-ending summer visuals and salty breezes is a sonic backdrop of joggers, boat engines and riverside traffic humming in the distance.

Beneath its murky depths, however, exists an entirely different world – a fantastical aquatic wonderland of venomous catfish, seahorses that ride the currents on seaweed and sponges, frolicking bottlenose dolphins with names such as Moon, Night and Bottomslice and a tiny supervillain shrimp capable of generating a sonic boom so powerful it can shatter glass.

It is this uncharted, underwater environment that captures the imagination and forms the premise of Alluvial Gold – an art installation and contemporary music performance by percussionist, Louise Devenish and composer, Stuart James, in collaboration with artist and filmmaker, Erin Coates.

Alluvial Gold was first conceived by Coates in 2020 as a commission for the Goolugatup Heathcote Gallery Tilt program – an annual invitational residency and exhibition where selected artists develop a body of work in response to the historic Goolugatup Heathcote site. Drawing from her experience as a freediver, Coates decided to explore the Derbarl Yerrigan’s changing ecology below the surface and research the impact of human occupation.

Of particular interest to her was the accumulation of heavy metals in estuarine dolphins and the destruction of the native oyster reefs – themes that continue to be explored and referenced in the second iteration.

The performance of Alluvial Gold at the Perth Institute of Contemporary Arts (PICA) is an intimate 45-minute sonic journey and visual spectacle that plunges the audience deep into the soul of the Derbarl Yerrigan to experience not an imagined world, but rather a reassembled reality stitched together with carefully curated sounds.

Derived in part from curious instruments modelled on dolphin bones and oyster shells along with field recordings, Devenish and James have masterfully interpreted Coates’ film and sculptural pieces – summoning a soundscape from the aquatic dimension.

Set against a mystical kaleidoscope of underwater projections, the journey begins on the river’s surface and is symbolically marked by Devenish gracefully dipping a shell into a bowl of water. Part performance, part meditation – the rhythmic sounds of bobbing, lapping and dripping serve as an entry point into an unfamiliar world rarely experienced by humans.

Devenish is hypnotic to watch and deliberate in her delivery, drawing out single notes on the xylophone and triangles into uncomfortable spaces that demand the world be experienced at a different pace. Like meditating for the first time, the listener is expected to practice patience and discipline to successfully pierce the time threshold.

From the assertive rustle of a Capiz-shell windchime to the sound of oysters bouncing on an amplified timpani drum, Alluvial Gold is a challenging and sonically complex exploration into an alternate underwater existence.

As the visuals guide the audience further from the surface, the atmosphere grows ominous and uncertain. The light dims, the water begins to churn and there is a distant echo of a thunderstorm or boat propeller cutting through the water. The score becomes dissonant in response and is accompanied by the ethereal tones of a singing saw and the unfamiliar, gourd-like rattles emitted from a shimmering disc of oyster shell armour.

As the camera turns back to the surface to reveal glimpses of blue sky, it becomes apparent that Alluvial Gold is not so much a performance as it is a journey through a densely rich world that ever so closely borders our own but is yet so alien. It prompts us to step back and consider how our own reality and actions frequently intersect and affect countless other worlds in the process.

Until 16 July, PICA and Tura New Music will co-present While You Sleep by Kate Neal and Sal Cooper in the PICA Performance Space. Dark, subtle and surprising, While You Sleep weaves string quartet, piano, electronics, film and animation in a surreal counterpoint of music, movement and image where nothing is as it seems.