A joyous version of the Gilbert and Sullivan musical that most fans will love.
Lynne Lancaster 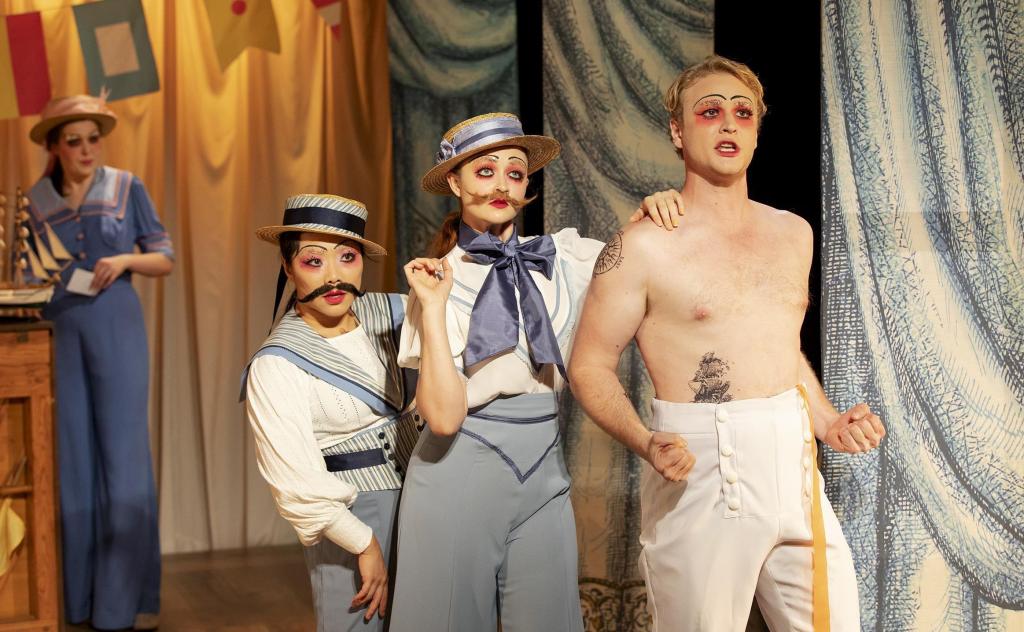 Oh give three cheers and one cheer more for the cast and crew of this HMS Pinafore.

This wonderful, exuberant gender-bending production, directed by Kate Gaul, is not a ‘traditional’ version of Gilbert and Sullivan’s comic operetta but joyously updated with a twist. Things are seldom what they seem.

The rather slight plot shows us the crew aboard the H.M.S. Pinafore. One of the able seamen Ralph Rackstraw – ‘the smartest lad in all the fleet’ – is in love with Josephine, the captain’s daughter and she returns his affection, but has to hide it. The problem is that Captain Corcoran has arranged for her to marry Sir Joseph Porter, the First Lord of the Admiralty, who arrives on board with an admiring crowd of ‘sisters, cousins and aunts’. When Ralph and Josephine decide to elope, their plan is revealed, but a surprise disclosure turns everything topsy-turvy. Love eventually conquers all.

The magnificent cast of 11 performers and a fluid onstage band (including trombone, clarinet, guitar, cello, violins and harmonica) led by pianist and singer Zara Stanton perform with gusto and panache. There have been some slight trimmings and adjustments to the lyrics. At times the show is witty and hilarious, at others extremely moving.

The set design by Melanie Liertz references Victorian pantomime (I liked the ‘billowing wave’ of fabric and the ship model of HMS Pinafore, for example) in parts yet also has a gay nightclub feel. Sound design by Nate Edmondson encompasses the sound of lapping waves. Ash Bee’s choreography was tight, snazzy, and excellently adapted to the space of the Hayes stage.

Costumes are at first deceptively Victorian, with wonderful naval whites and spiffing uniforms for Captain Corcoran and Sir Joseph that later change to sequins, caftans, spandex and even a pink showgirl outfit, among other get-ups. Queerness is central to this production. All the cast wear emphasised make-up, with rouge, silver eyeshadow and a profusion of tattoos, combined with some fake moustaches.

As Josephine, soprano Katherine Allen – a recent graduate from the Sydney Conservatorium of Music who was an Associate Young Artist with Pacific Opera – is in lustrous voice and extremely moving in Sorry Her Lot Who Loves too Well to name just one segment.

As much loved Captain Corcoran, who never (‘well, hardly ever’) uses bad language, Tobias Cole is in fine, imposing form, particularly captivating in Fair Moon, to Thee I Sing.

Rory O’Keefe is a young, blonde, Apollo-like apparition as Sir Joseph, the ‘ruler of the Queen’s Navee’ who has never been to sea. He makes a startlingly spectacular entrance, scurrying topless with golden glittering nipples, before assuming his full naval uniform, and is in glorious commanding voice. (It’s quite a different interpretation of Sir Joseph, who is often played as rather old and doddery.)

Buttercup was given a delicious performance with great relish and gusto by bearded Thomas Campbell in drag, at times using somewhat embellished ‘feminine’ gestures to comment on gendered behaviour.

The show concludes with the cast sending a semaphore message (a motif already used in He Is An Englishman) and the unfurling of a glittery rainbow flag.

Overall it’s a joyous, witty romp. Some G&S fans might perhaps find it too different but most, I think, will love it.