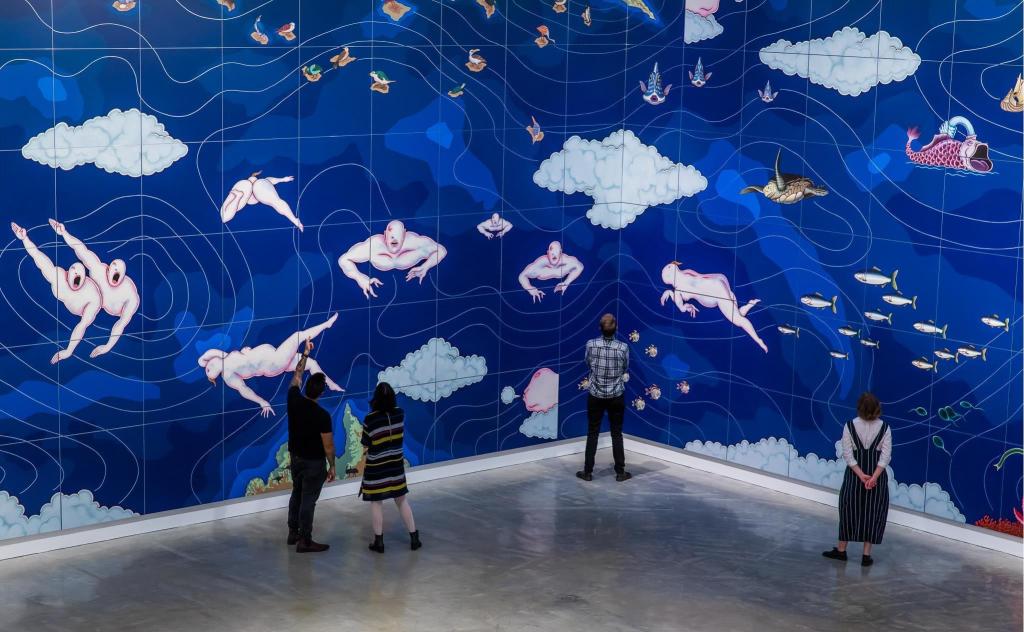 As news subsides on protests across Hong Kong and celebrations across China have marked (or marred) the Republic’s 70th anniversary, a solo exhibition by Chinese-Australian artist Guan Wei has opened at the Museum of Contemporary Art Australia (MCA).

Manya Sellers, the Curator of Guan Wei: MCA Collection, said the exhibition’s timing was purely coincidental. It is also a provocative reminder of the power of an artist’s voice, and its capacity to be heard by future generations.

The exhibition – while only consisting of four works – spans a 30-year period and feels monumental. Guan Wei is part of a generation of artists that left China in the wake of the Tiananmen Square events in 1989. He arrived in Australia that same year, and a decade later, the MCA was the first Australian venue to hold a solo exhibition of his work.

Key to this new show is an early series of 48 gouache and collage on paper, Two-finger exercise (1989), a work which was made in Beijing in the months following the Tiananmen Square massacre. The repetitive gesture across Guan Wei’s stylised figures is the two fingers held in the air – a salute that became synonymous with the 1989 student uprising.

In a conversation with MCA Curator Anna Davis, Guan Wei said he had observed people of all ages making this sign of peace and solidarity across the city prior to the events in Tiananmen Square.

Wei describes the collages as ‘certificates’ that indicate a kind of “a secret letter has arrived, and there are hidden meanings to be opened up by the viewer.”

Sellers told ArtsHub: ‘He likes to talk about this work hinting at, but not about him taking a particular position; more his observations as an artist on this cultural phenomenon of the two finger gesture and pro-democracy movement in China at the time.’

Thirty years later, as viewers, we are again asked to consider the protest gesture. It is curious when placed opposite the expansive and impressive work, Feng Shui (2004), what was actually the real catalyst for this exhibition.

Walking into the MCA’s lower “white cube” space visitors are seemingly engulfed by the huge work that measures 18 metres long and five metres high, comprised of 120 panels (pictured top). Originally commissioned for Melbourne’s Bureau of Meteorology building on Collins Street, it was donated to the MCA Collection in 2017.

Sellers said: ‘They were renovating and they wanted to get rid of work and they thought of us because we had a long association with Guan Wei – we did his survey show, Nesting, or the Art of Idleness, curated by Sue Cramer and the first in our new Level 4 space, which we opened in 2009.’

Feng Shui is an epic narrative of our relationship with water, earth and sky.  It is the first time it has been pulled out since it was acquired in 2017 – which goes back again to the coincidence of timing. It takes this long for things to be scheduled in a museum environment, but its unveiling this month is uncanny with the escalated Extension Rebellion globally.

Feng Shui was completed in 2004 and has a very “Australian tone”. But by 2008, Guan Wei had reignited his connection with China and its contemporary art world, keeping a studio on Beijing’s outer rings, and splitting his time between there and Western Sydney.

Seller noted: ‘While there’s only four works in the show, you really get a sense of the threads and the connections in his practice, and also the changes in the work, from those made in China to Australia, where the palette and scale of his work changed so dramatically.’

Another signature piece Guan Wei made around this charged period of global politics – and perhaps better known offshore where it has been exhibited extensively – is Paper War (2014–15), a work created when the artist was on residency at the then Australian Council studio on Green Street, New York in 2003.

In it, Guan Wei has over-painted his signature icons, military figures and weaponry upon a reproduction of a traditional ink scroll. Ten years later (2014-2015) he added an animation component; and for this exhibition, expanded it further with wall drawings.

Seller relayed the story that just after Guan Wei’s arrival in New York the city had a 2-day black out, which triggered fear and suspicion in a post-911 environment.

Whether asylum seekers and boat people, racial targeting in New York, democracy advocates in China, or our oceans in peril from climate change, this exhibition demonstrates that the velvet glove of Guan Wei’s aesthetically pleasing work can deliver a serious-thinking wallop.

Aesthetically, it is interesting to think of the tone of Guan Wei’s work back-to-back with other contemporary Chinese artists working post 2000. It’s interesting this exhibition also coincides with the 10th anniversary of the White Rabbit Collection (MCA gave Guan Wei his first solo show a decade earlier).

I viewed these exhibitions back-to-back, and while there is a consistency in lavish scale and production levels, there is a veil of whimsy in much of Guan Wei’s work that taps into an Australian vernacular and allows space for the viewer, that is not largely felt across the White Rabbit Collection.

People will read their own narrative into these works – find their own connections – and that is perhaps Guan Wei’s greatest gift, his ability to oscillate between worlds and cultures, concerns and idiosyncratic views.

Guan Wei: MCA Collection is exquisite for its design; its pristine presentation and its aesthetic value. It doesn’t pummel us with politics or overwhelm us with content, and yet it provokes audiences to think about and relate these global concerns to their own world.