A deliciously camp version of the Noël Coward play, direct to Australian screens from the London stage.
Liza Dezfouli 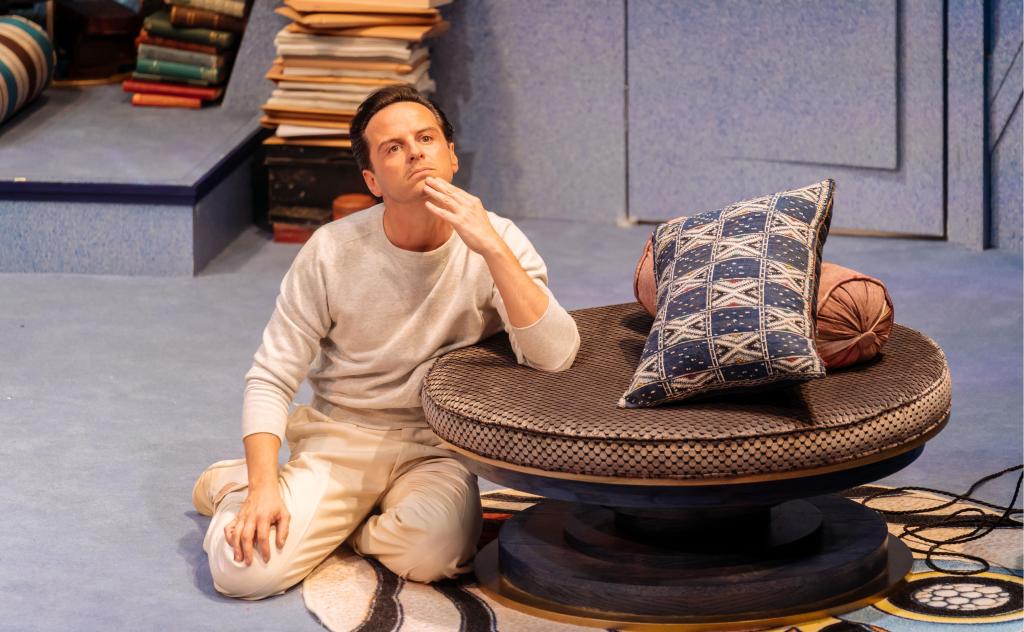 It’s so much fun to see this production of Noël Coward’s Present Laughter from National Theatre Live. Without being self-consciously modern, this version updates itself by gender reversing roles and inclining towards Coward’s more likely intentions regarding sexuality. The result is hilarious – deliciously camp and bitchy in the finest tradition of Oscar Wilde. Present Laughter is the type of play seldom written these days, or at least seldom written so well. The urbane witticisms and exchange of insults are as good as anything, ever. The subtext is palpable.

Coward wrote the character of Garry Essendine, a matinee idol of the early 1940s, as a love letter to himself. Matthew Warchus directs Irish actor Andrew Scott (Moriarty in BBC’s Sherlock, alongside Benedict Cumberbatch, and The Hot Priest from Phoebe Waller-Bridge’s Fleabag) in the lead role. Scott is superb: expressive, strong, charismatic and nuanced, whether he’s being bratty, theatrical and needy or honestly open in those few moments when the ‘real’ Garry is revealed. Scott’s performance range is well-utilised here. The collection of employees, lovers, exes and hangers-on who have taken it upon themselves to keep Garry ‘on track’ all project their own version of Garry in order to meet something unfulfilled in themselves. But Garry simply loves to perform, and although he’s constantly hungry for attention and adulation, he knows he doesn’t need his entourage as much as they need him.

Present Laughter asks and answers the question: Who is the real Garry Essendine? It’s an astute observation on fame, celebrity, and the now-clichéd sense of isolation experienced by the over-spoilt and entitled. But the character of Garry Essendine (Essendine being an anagram of ‘neediness’) goes further, and here we see Coward demonstrating a clear understanding of himself. Garry will take advantage of whoever offers themselves to him, yet he tries with each interaction to make the adoring individual aware of how he’s not available in the way they wish. Despite his narcissism, he’s actually self-sufficient.

A great part of the joy of Present Laughter is in seeing fully realised characters engaging in extended dialogue and over-the-top style of acting, a theatrical mode which fell out of favour for decades. Minor characters are fun and recognisable while resisting stereotype: the mature-age secretary Monica (a sparkling Sophie Thompson), knowing cockney valet Fred (Joshua Hill), and the passionately lovestruck Daphne (Kitty Archer). The Scandinavian housekeeper (Miss Erikson) is played by Liza Sadovy as a literal-minded eccentric, unintentionally humorous. Indira Varma is disdainful as estranged wife Liz, and Luke Thallon is hilarious as the would-be intellectual young playwright from Uckham, Roland Maule. The seduction scene between Garry and the magnificently masculine Joe (Enzo Cilenti in classic tuxedoed seducer mode) is breathtakingly tense and magnetic. Suzie Toase gives us a forceful, ambitious Helen; she and husband Joe are gender reversals of the original characters. The least convincing character to my mind is Morris (Abdul Salis), too mature to be so unformed and one-dimensional.

The acting is big and beautifully so, and you want to applaud nearly everyone on their entrances and exits. Warchus’s direction plays up the farcical element to extreme. The play is structured so the last scene where Liz insists on returning to Garry sits on well-defined foundations. The single room set is at once both stylised and modern, with high windows curving inwards to the ceiling, creating a space to act as a temple to Garry’s ego.

This version of Present Laughter is being unanimously lauded. Nothing not to laugh at nor love here.