A showcase of three exhibitions that reflect the Shoalhaven environment and the Australian bush.
Christina Donoghue 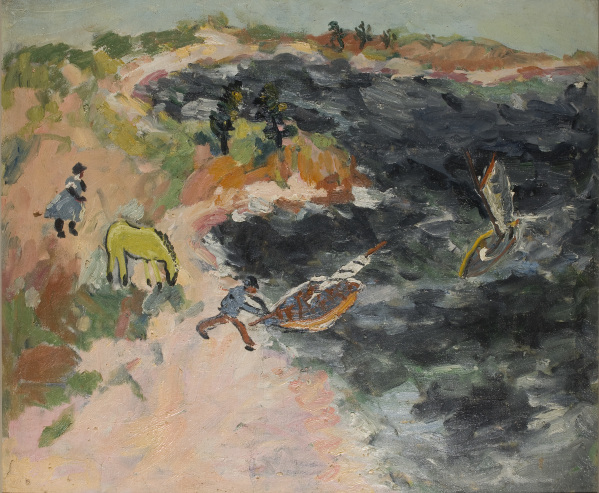 They say ‘be careful what you wish for’. This appeared to be true as the guardians of the Wodi Wodi and Yuin land, in concert with river and sky, seem to have taken the invitation of Parallel Landscapes literally, as the tight knit team at Bundanon launched their Season 2 program amid 2022’s third flood season for the Shoalhaven.

As the skies opened, all the environmentally aligned thought and design of the properties – the Bundanon Art Museum, specially crafted landscape design, and the awarding winning ‘The Bridge’ – were tested as they allowed the torrential waters from the surrounding hills to flow through the deep valley, whilst still accommodating the eager, gum booted throngs of art lovers who braved the roads and sheeting rain to inspect the new works.

Parallel Landscapes is three exhibitions presented within the space of the Bundanon Art Museum. The exhibitions are: Arthur Boyd: Landscape of the Soul; The River and the Sea by Reuben Ernest Brown (Uncle Ben Brown); and The Hidden by Tim Georgeson and William Barton.

The intention that binds these three quite different exhibitions is their responses to landscape and their communion with the natural world. However, there were also some strong interactions between the exhibitions that were unavoidable due to real estate, proximity, and the flow and intimate connectedness of this museum space.

Arthur Boyd: Landscape of the Soul is curated by Barry Pearce. The exhibition takes up the main room of the museum and two of the smaller areas. It includes a selection of pieces chosen from different phases of Boyd’s life, and a film by Catherine Hunter that shows the curation of the show by Pearce.

Also included are letters between Boyd and his mother Doris and a selection of water colours, oil paintings and sketches by Boyd’s grandmother and grandfather.

There is a chronological arrangement in the way the pieces are arranged that acts almost as a creative and locational timeline for Boyd’s works. The arrangement encourages you to start at the beginning and witness the evolution of one man’s journey and interaction with the environment.

There’s a translation of art through the muted tones and traditional landscapes of his youth, until there is an explosion of colour and style in the Nebuchadnezzar series that dominate the space of the main gallery, as the rising white vertical space of the wall allows their energy to inhabit more than their physical space.

The inclusion of the family artworks and letters creates both a multi-dimensional and parallel journey that both acts as an overt explainer to some of Boyd’s central stylistic influences, but is also explicit in connecting the works to family lineage.

By placing all of this together in land at Bundanon with its multimillion-dollar collection stored in the room behind it, solidly communicates intention that Boyd belongs here.

The family artworks and letters also act as a bridge between the Boyd exhibition and that of Uncle Ben Brown (1928-2009), The River and the Sea. This collection celebrates the paintings of local Yuin artist and cultural activist Reuben Ernest Brown, who created his works around the same time as Boyd.

Brown’s pieces are colourfully painted in bright fluorescent and primary colours. They picture everyday family life, sports, beach days, the river, and native animals with techniques seen in First Nations’ traditional art such as dot painting and a two-dimensional schema.

What is heavily present in Brown’s work is a simple sense of joy, family, and connection to Country and there is nothing overly complex or pretentious about his own connection to painting. It is an interesting action to place these pieces, quite often gifted to family members, in the gallery space, given that Brown never visited here though he was aware of the space.

Also included are interviews with some of Brown’s children. One of his sons tells of being in the boat with his dad fishing on the river, when Brown points to Bundanon and says, ‘That’s where that painter lives… [ Arthur Boyd].’

There is something beautiful knowing that all these years later, both Brown and ‘that painter’ have their exhibitions hanging in the same space, on Yuin land. It speaks to a parallel landscape of time where all things exist in the same place.

The final exhibition is the same soundtrack that permeates the whole museum space as you view the Boyd and Brown exhibits. The Hidden is an immersive sound and image work created as part of a residence at Bundanon by composer and musician William Barton and filmmaker Tim Georgeson.

Projected onto three screens at scale, The Hidden is a three act series that explores the land and river of the site. What is most pronounced is Georgeson’s capturing of the different qualities and moods of light that are unique to the area.

There’s an examination of the way the light reacts on the surfaces of the trees and vines, how it blurs and moves through the canopy of the rainforest, and how it holds almost stationary on the surface of the water, while the river moves underneath its reflection. In an interaction that both stands beside and weaves within the light, Barton’s composition and soundscape journeys through and around the vision captured by Georgeson.

The constant sound of the digeridoos vibrate through the sandy earth beneath the museum and travels up the trunks of the trees. Accompanied by Barton’s vocal effect that summons winds, waters, leaves, finches and ancestors, what is felt is a polyphonic harmony that is meditative and translates the spirit of the land where it was conceived with a astuteness that only comes with time, presence, and a ‘being with.’

WhileThe Hidden connects with the other pieces of Parallel Landscapes from the perspective of landscape – which was the stated focus – it felt a little mismatched in terms of lineage and family due to the Boyd and Brown exhibits relating so closely on this plain.

Parallel Landscapes will be on exhibit until 6 November 2022. 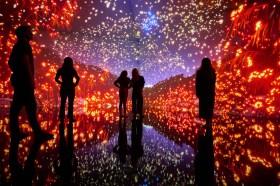