A showcase of works from conception to development and completion.
Pamela See 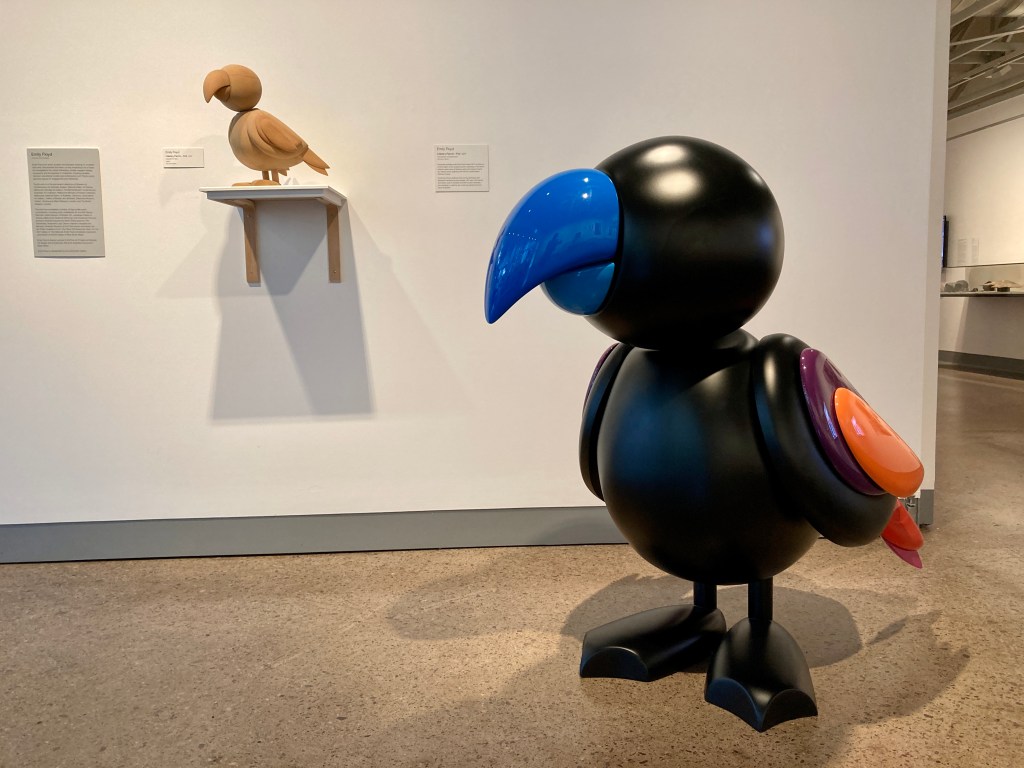 Through showcasing public art projects, The Art of Making takes visitors on a journey around Australia, with the profiling of several artists who have indelibly altered the Australian landscape through their collaboration with Urban Art Projects (UAP), over the past 28 years.

As its name suggests, The Art of Making steps through the processes of creating public sculptures, from when the concepts are first conceived – be they intimate ephemeral explorations by individual artists – to the resulting manufactured, and at times monumental, artworks.

Families are likely to first react to Poll, designed by Victorian artist and educator Emily Floyd. The toy-like parrot has been oversized into a 13-inch computer numerically control (CNC) carved wooden maquette and a five-foot cast aluminium sculpture. The editioned artwork is reminiscent of A Little Community, installed in the foyer of the Queensland Children’s Hospital in 2014 as part of its public art program.

Visitors will be also be drawn to the opposite wall, where an intimately scaled cardboard construction of a mangrove sapling resides next to a photograph of its monumental corten steel reproduction. Created by celebrated K’gari artist Fiona Foley in 2009, Mangrove Cap is an illuminated feature of the Bluewater Trail in Mackay.

The seed pods of the robust flora were also the subject to an installation by the same artist in 2010, titled Fraser Island Mangrove. This is represented on an adjacent plinth through patterns, moulds and a cast aluminium sculpture. The glimpse into the production process is complemented by examples from a third public artwork by Foley. The site is the State Library of Queensland in Brisbane in 2006, the motifs were a series of poppy pods in an artwork titled Black Opium.

The hallmark of an effective landmark is its inextricability, from a geographic site or time of conception, yet its ability to transcend them. The Statue of Liberty and Michelangelo’s David are primary examples, with replicas of both presenting remote tourist attractions.

The appeal of the certified copy of David in Raptis Plaza on the Gold Coast remains reliant on the aura of the original, which was created during the 16th-century and resides in the Academia Gallery in Florence. Just as the Window of the World theme park in Shenzhen offers an experience of Manhattan, this exhibition takes its visitors to several cities including Adelaide and Sydney. It also presents a trip back in time, to pivotal moments in making.

The highlight of the exhibition may be a selection of maquettes by, arguably, the preeminent artist of the field of public art in Australia, Lindy Lee. The maquette for Secret World of a Starlight Ember, the final artwork of which was installed in Sydney’s Museum of Contemporary Art in 2020, towers at the gallery entrance. The comparatively modestly scaled maquette for The Life of Stars, installed at the Art Gallery of South Australia for the 2018 Adelaide Biennial of Australian Art, was also presented on a shelf.

Tin maquettes for an artwork titled Dragon’s Pearl: Open as the Sky, and a ladle with which the artist created the organic forms, occupy a nearby wall. This process is demonstrated on a video projected in a darkened alcove behind them.

The exhibition also projects into the future through presenting elements of artworks in progress by Kabi Kabi/Gubbi Gubbi artists Lyndon Davis and Brent Miller. Helimon I by Davis was installed at Bli Bli on the Sunshine Coast in 2019, and Helimon II by Miller is scheduled for installation in 2023.

This exhibition, which includes a film about the making, captures the process from the artists in the UAP foundry during the initial design stage with drawings, through to documentation of the monumental shield on site. Also featured are the original shield and boomerang, which the artists used as a starting point, 3D-printed maquettes created from 3D scans and a figure for scale.

Other engaging elements of the exhibition include playful plasticine patterns of Seven Dogs created by Burarra/Gun-nartpa artist Lena Yarinkura in 2010 and the moulds for the cast concrete textile embellished rocks from to Water is Life woven by Quandamooka artist Elisa Jane Carmichael in 2020.

At a time when families in Queensland may be highly selective of the venues they visit, the exhibition offers a journey which transcends geography and time. It investigates how these monumental and, at times, complex forms are conceived in familiar materials such as plasticine, cardboard and wood to challenge the imaginations and expectations of its viewers.