The first major survey of the Marek brothers rides on a wave of ideas that challenge conventions of Australian art.
Dr Diana Carroll 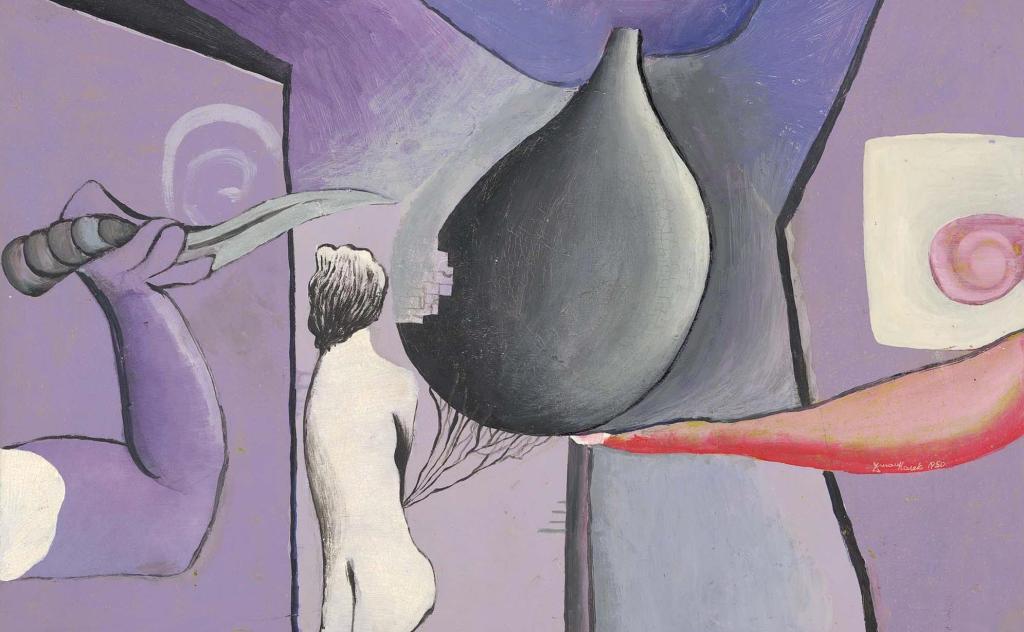 Dušan Marek, Love, Defiance, and Death (1950). Collection National Gallery of Victoria, Melbourne, and on display at the Surrealists at Sea exhibition at AGSA.

Surrealists at Sea, the new show at the Art Gallery of South Australia, shines a welcome spotlight on the works of brothers Dušan and Voitre Marek. Featuring more than 200 exhibits, and spanning almost 50 years, it highlights the breadth and diversity of their remarkable art practice.

Curator Elle Freak has overseen a considered hang of the works, allowing them plenty of air and adding some informative gallery notes. The works have been sourced from public and private collections across the country and include paintings, drawings, sculpture, prints, photographs, jewellery, religious iconography, and film. Many of them are on public display for the first time.

The juxtaposition of forms works well and lends itself to a leisurely stroll through the galleries. The paintings are exciting and engaging but it is the other works – the film, ecclesiastic sculptures, jewellery etc – that really demand your attention. They are curious, sometimes surprising, and make you  inspect more closely. Every piece is masterly, thoughtfully conceived and skillfully executed.

The Marek brothers came to Australia as émigrés from communist Czechoslovakia in 1948, arriving first in Sydney before settling in Adelaide. They were apparently hopeful that the city of churches would be reminiscent of Prague.

The Adelaide connection is still strong today. Voitre’s daughter Olga Sankey is a prominent Adelaide artist and arts lecturer, and members of the Marek families were at the exhibition launch.

One of the key works in the exhibition is My Gibraltar, an oil on board painted by Voitre during the long voyage to Australia on the SS Charlton Sovereign. Another of the major exhibits, and the oldest painting on show, The Voyage was painted by Dušan on a wooden slat from a bunk bed upon which he’d slept during their four months wait at a displaced persons’ camp in Germany.

Found materials also form the basis of the impressive double-sided work, Perpetuum Mobile and Equator, apparently painted on a table top while onboard ship.

My Gibraltar (1948) by Voitre Marek, on display at the Surrealists at Sea exhibition. Collection Art Gallery of South Australia, Adelaide. Image supplied.

Already accomplished artists, the brothers quickly became part of the Adelaide art scene. They are now credited with setting in motion a surge of new ideas that challenged the conventions of Australian art. AGSA says their early exhibitions in Adelaide and Sydney were met with ‘praise, puzzlement and censorship’.

Gallery Director Rhana Devenport added: ‘Necessary and illuminating, this exhibition follows a similarly remarkable story of rediscovery as AGSA’s recent Clarice Beckett survey. Surrealists at Sea aims to reinsert the art and influence of Dušan and Voitre Marek back into the pages of Australian art history, where the contributions of many émigré artists have been too often overlooked.’

This narrative of gallery as hero, rescuing an overlooked artist or rewriting the story of their art, is becoming something of a theme and is a little troubling. In this particular case, the National Gallery of Australia lists more than 120 works by the Mareks and AGSA itself has a considerable holding.

If the Mareks have indeed been ignored in the story of Australian art, then these institutions have been complicit in that over the years by keeping their works tucked away in storage and not on public show. And it begs the question, have they been ignored?

A number of works by Dušan Marek were featured in the major touring exhibition, Surrealism: Revolution by Night, put together by the NGA in 1993, so perhaps not. Sculptural works by Voitre can be seen in many local churches around Adelaide, and even interstate, if you take the time to look.

It can obviously be argued that by 1948 the art-world had moved on from surrealism. Indeed, it’s surprising really that they had any success at all as surrealists given they were some 20 years too late to the party. Surrealism was primarily a movement of the post-WWI period and had been replaced with Abstract Expressionism and other styles by the late 1940s.

Surrealists at Sea is accompanied by an all-ages immersive and interactive space created in the Studio at the Gallery by Patch Theatre called Sea of Light. This is open on weekends and every day during the July school holidays and was inspired by Voitre’s time living as a lighthouse keeper on Kangaroo Island.

The exhibition is accompanied by an excellent hard-back catalogue, that is worth every dollar of its cover price. Edited and introduced by curator Elle Freak, the catalogue features essays by nine contributing authors that significantly enhance our appreciation of the show and these important artists.

It is however especially disappointing that yet again this major print commission was overseen in Melbourne and shipped off to China for printing. Surely now there is an even stronger imperative than usual for AGSA to demonstrate its sense of social responsibility and spend that money locally.