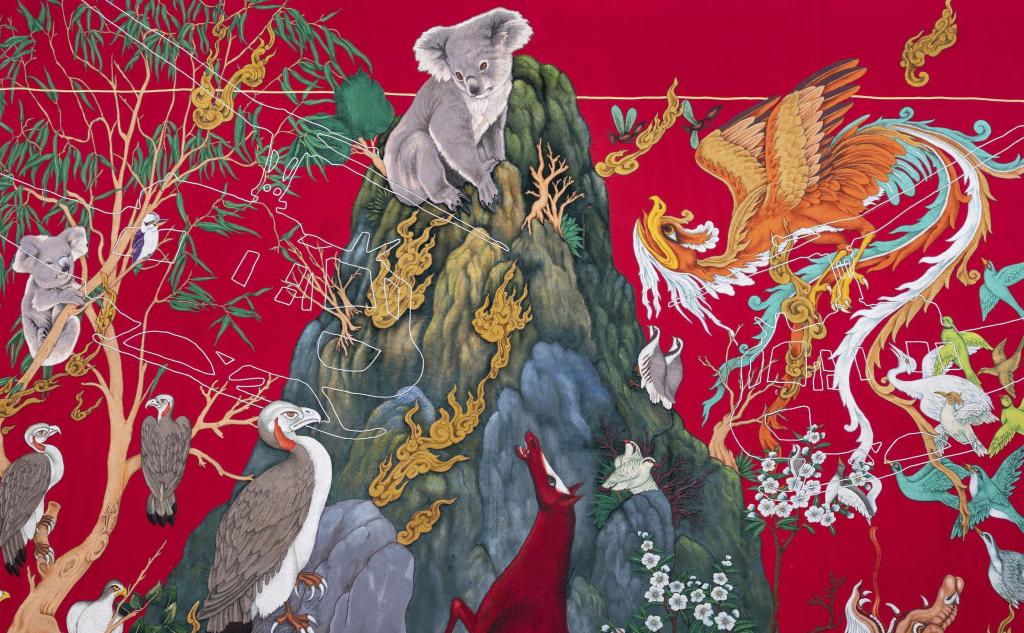 At a time when travelling remains off-limits to a majority of Australians, the exhibition Invisible Borders at the Institute of Modern Art (IMA) offers a journey that transcends cultural and chronological boundaries. This is the largest solo presentation of the internationally acclaimed artist Khadim Ali to date. Originating from the Shia Muslim Hazara community on the border of Pakistan and Afghanistan, he was born displaced in 1978, eluded the Taliban by escaping to Iran as a teenager and, by virtue of a Distinguished Talent visa, settled in Australia in 2009. Ali brought with him folktales and traditions inherited from his family in Quetta. The latter includes miniature painting and textile weaving. The exhibition offering a precious perspective on both Australia and Afghanistan, where Westerners are other. Materiality and mythology are his primary vehicles.

Gallery Two presents a point of entry and departure for the remainder of the exhibition, a poignant context for the series Sermon on the Mountain which critiques the calamity of the 2020 Black Summer bushfires. The textile centrepiece, which is approximately five by four metres in dimension, transposes iconographic Australian flora and fauna into a composition derived from an illustration in a 15th century Persian interpretation of the Anwar -I Suhayli. The title of the series references a passage in the Christian bible of the same title. Ali wrote a new sermon with Bamiyan writer and historian Asad Buda. In this retelling of one of the fables in the book, Ali has replaced a crow with a koala who ‘foretells the destruction of mother nature’ to a menagerie of creatures with symbolic significance, from phoenixes to tigers.

Within a Western European context, a lens through which some visitors to the IMA may be appraising these artworks, manuscripts and tapestries were media that emerged during the 14th century. The majesty of both was embedded through precious fibres and pigments. Gold was applied as thread and leaf. The manufacture of both was and remains collaborative. However, Ali is drawing on the authority of an older rhetoric.

Despite his practical introduction to painting – the creation of political murals for the Iranian government during early adulthood, ending with his exile home to Pakistan – Ali would go on to study miniature painting at the National College of Art in Lahore. The tradition evolved from the 13th to 14th century Mongol occupation of Persia, which resulted in a transference of aesthetic qualities from the Chinese. This may be evidenced by the presence of foreshortening, yet by a distinct negation of linear perspective. The latter was developed by Filippo Brunelleschi and Leon Battista Alberti in Italy during the 15th century. However, foreshortening was also being applied in Song Dynasty realist paintings at the time of the Mongol invasion of China. Similarly, Guo Xi developed a Chinese system of perspective, known as the three distances, during the 11th century. Sermon on the Mountain exhibits the Chinese convention of height distance. Ironically, Ali’s ethnic minority group, which has been subject to genocide by the Taliban, is also purportedly descended from Mongol soldiers.

During his artist talk at the IMA on Saturday 10 April 2020, the softly spoke Ali candidly shared with the audience the appraisal made by his friends that ‘Khadim is now making big miniature paintings’. Miniature paintings were traditionally integrated into manuscripts. Such handwritten documents were commissioned by royalty to immortalise their dynasties through verse and visual metaphor. However, reflective of their intimate scale, manuscripts were primarily designed for consumption in private.

Ali was introduced to the Shahnameh or the Persian Book of Kings as a child by his grandfather. The original manuscript, without pictures, was completed by the poet Abolqasem Ferdowsi during the 11th century for King Mahmud of Ghazni or present day Afghanistan. A lavishly illustrated version was commissioned during the Mongol occupation. Commissioning reinterpretations of this compilation of fables about the ancient Persian kings became a method of legitimising subsequent sovereignties. Folk stories are pervasive in their transmission of values. The inherently immersive qualities of the genre were amplified by Ali’s significant increase in the scale of the illustrations.

This is further emphasised by his material transition into textiles. He embraced his family practice of weaving after discovering intact ‘carpet’ amongst the rubble of his car-bombed home in 2011. Persian carpet weaving bears similarity to Gobelin tapestry weaving in technique, which rose to prominence in France during the 17th century. In some Northern and Western Asian cultures, carpets are secured to walls for decoration and insulation. The textiles in this exhibition are suspended with sufficient clearance from the walls to enable people to circumnavigate. Ali is signalling to the audience through the domesticity of this medium. He is offering a testimony on behalf of ordinary people.

The textile compositions in Gallery Three transport viewers north-east with allegories referencing the exploits of 16th century Mughal Emperor Akbar, 17th Century Mughal Emperor Jahangir and the recently ceded President of the United States of America, Donald Trump. Although not the largest, which is nine metres in length, viewers are likely to be drawn to Invisible Borders 4, which juxtaposes the latter two political leaderships. The myth appropriated by Ali occurred during the reign of Jahangir, when his son was weighed and his weight in gold and silver was distributed to the poor.

However, in Ali’s contemporary interpretation President Trump is weighing the co-founder of the Taliban movement, Mullah Abdul Ghani Baradar. The artwork critiques the February 2020 peace agreement, which Ali described as ‘very ugly’. The stitching of wigs and red noses onto the political leaders occurred at the very end of Ali’s creative process. This approach of ‘shift[ing] authorities and truths’ using humour is consistent with the carnivalesque theories of Russian philosopher Mikhail Bakhtin. It is an approach to subverting subjugation previously employed by both Kara Walker and William Kentridge.

The textile artworks in the exhibition were digitally composited with files provided to fabricators in Kabul. This was proceeded by a process of relaying and adjusting. His collaborators sent photographs and Ali responded with further instruction. The artworks were also digitally consolidated, with their tactile handcrafted surfaces disrupted by machine embroidered silhouettes of military personal and their vehicles. This layer reflected the struggle of the artisans to continue working with the pervasive and persistent threat of violence.

Ali is providing manufacturers in the region with an income. This process is explicitly explored in his collaboration with Sher Ali, a multisensory installation in Gallery Four. Urbicide 2 is comprised of prayer mats and horns omitting Taliban propaganda. A metal circuitry pattern has been applied to the wall. It represents a growing industry in Afghanistan of building ‘circuitry, homemade explosives and electronics’.

Over the preceding two decades, Australians have been bombarded with media coverage demonising refugees. This is a concept that Ali has addressed through creating an alter ego in Rustam, a demonic manifestation of his hero from the Shahnameh. Inspiration came from the ancestral home of his people, Bamiyan. The Hazara, who resided in the caves of a region famed for its now desecrated Buddha statues, were regarded as ‘rat-eating’ demons. However, the metaphoric ‘gold’ in this exhibition resides in its change in focalisation. The audience is invited to look with Ali and his Middle Eastern collaborators, as opposed to at them as other. The role of latter has been reassigned to Westerners, with respect to both their Christian values in Australia and their military action in Afghanistan.

Pamela See (Xue Mei-Ling) has a Doctor of Philosophy (PhD) from Griffith University and a Master of Business, majoring in public relations, from the Queensland University of Technology (QUT). She has contributed to publications such as M/C Journal, Art Education Australia and Garland Magazine. Her research interests include craft, post-digitalism and participatory art.