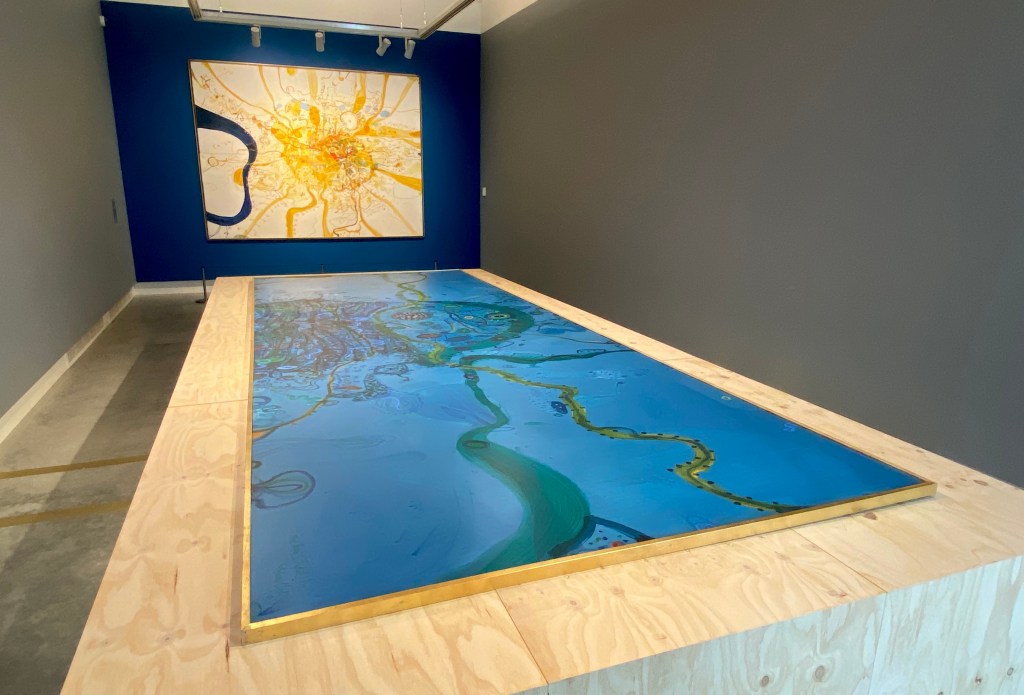 When exhibitions tour, they can be a challenge to ensure that they both feel fresh and have a connection with local audiences. This is even moreso when an exhibition has a long curatorial gestation period.

John Olsen: Goya’s Dog as an exhibition has had a long trajectory, and somewhat stultified delivery. It was conceived by the late curator William Wright AM and bought to life many years later by National Art School Director Steven Alderton. It opened at NAS Gallery in June 2021, only to be closed for the larger part of its duration, thanks to Sydney lockdowns.

It has recently travelled to the Southern Highlands, where Olsen lives. Re-envisioned by Ngununggula Director, Megan Monte, some have thought it an entirely different show. At its core, however, is Wright’s desire to flesh out Olsen’s passion for drawing, and to perhaps buck the misconception that Olsen only painted expansive ‘sunny’ works with a joie de vivre.

Walking into the first small gallery, both those concepts are established from the outset. A digital flip-book, that allows viewers to ‘thumb’ through Olsen’s sketchbook, establishes drawing as the anchor point here; it is both cue for the show and its final full stop as one leaves.

It was in the mid 1950s that John Olsen first travelled to Spain and became entranced with the country’s culture – its poetry, literature, and music. That passion is captured in a suite of earthy-toned works in this first gallery, which Olsen believed ‘reverberated the soul of Spain.’

Spanish Encounter (1960) is an expansive calligraphic work of marks and gestures, painted on his first return from Spain, and dominates the small gallery. It is paired with works such as January 14 1960 and View of the western world no. 1 (1956), that collectively create a head space of the young artist charged with ideas, merged with art histories lessons and new encounters.

The next gallery gives viewers a bit of everything – from a nice pairing of intimate domestic studies, The loneliness of the king size bed and The bath (both painted in 1996 and on a rare loan from a private collection), to a glowing Golden summer Clarendon (1963) paired with a languid lush blue painting of a pool – which leads to what might be considered the gem of this exhibition.

In a small annex gallery squeezed between the main spaces, is Le soleil (1965) hung on a vibrant blue wall, with The bay and tidal pool (1979) raised on a massive plywood plinth so that viewers can peer down into it as a body of water. It is a fitting presentation that not only connects physically with the way Olsen paints, but to what Olsen considers his most important work since painting Salute to five bells (1972-73) for the Sydney Opera House.

Similarly, Le soleil was a pivotal painting, made after living several years in Europe, and that incredible first impact flying back over Sydney Harbour. That connection of canvases to travel, from memory to imagining, is continued and further fleshed out in the last gallery, which exhibits the series of works from which the exhibition takes its title Goya’s Dog.

Clearly, these works are more ‘psychological’ in their intent and feel, again breaking down perceptions viewers might have of the artist and ushering them through a full range of emotions found in his work.

There are also a number of works here that point to the impact of religious processions – and for anyone that has not encountered one of those old European traditions – there is incredible passion and palpable spirit that Olsen carries forward in these works.

The exhibition is completed by a rare gem – a work that stretches some three meters and has never been shown before. It is a permanent fixture in Olsen’s home, and was a rejected commission that lived under the house for a number of years. Spanish kitchen with paella Goya night scape (1970), is a perfect addition in sync with the curatorial premise and ‘unearthing’ a fresh look at Olsen’s oeuvre.

This exhibition is definitely a great excuse to take a roadie and visit Ngununggula’s inaugural program.

John Olsen: Goya’s Dog is showing at Ngununggula, the Southern Highlands Regional Gallery in Bowral, until 15 May