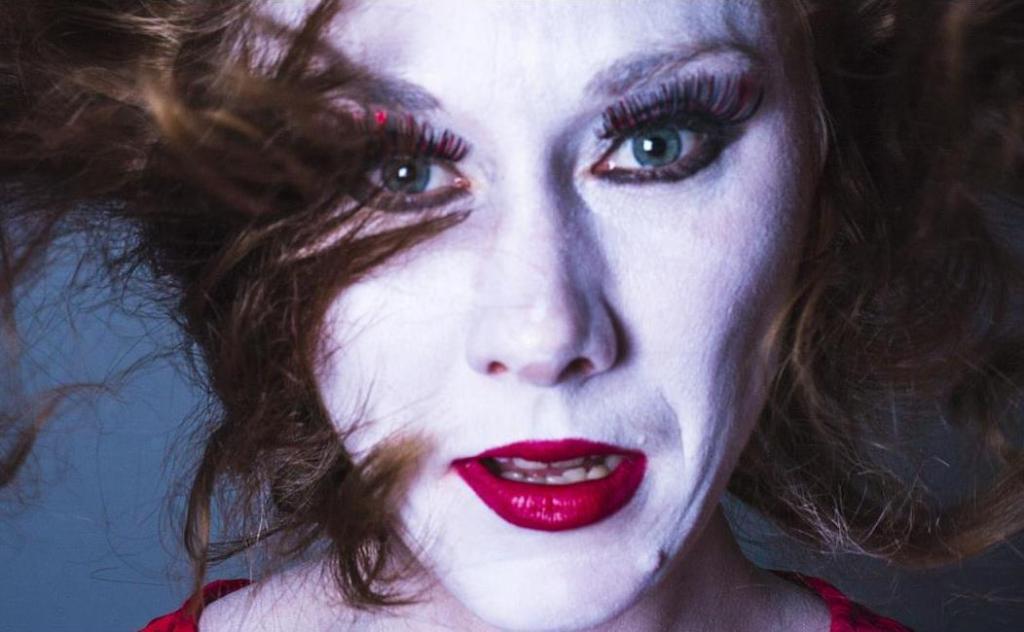 Audience interaction is integral to Evangeline (or, the Grief That Does Not Speak Whispers the O’erfraught Heart, and Bids it Break. Image supplied.

Presented as part of the Sydney Fringe Festival, this Little Dove Theatre Art production was strong and powerful and some audience members were deeply affected.

The concept behind the performance is an exploration and representation of grief – the play’s full title is Evangeline (or, the Grief That Does Not Speak Whispers the O’erfraught Heart, and Bids it Break). The show includes stylised, repeated phrases of movement that perhaps reference Butoh. Audience interaction is an important piece of the show that shapes its feel.

The cast are all in red ankle-length dresses with satin floral inserts. They have wild hair, whitened faces and startling red eye makeup. At the start, there are just two dancers, one with her back to us, doing an energetic, angular yet sinuous repeated movement phrase, the other a seemingly scaled down but fiercely controlled, isolated series of repeated movements.

Eventually other dancers – some from within the audience, some emerging from the wings – join them and they end up all doing the same movement sequence in unison to the insistent beat of the music, only then turning to face us. It is as if they are nightmare figures of vampires or zombies perhaps, with a silent primal scream. The stage is enveloped in theatrical haze and dramatic red lighting. Bang! Crash! They all fall to the floor.

With a change to a dappled lighting state, the mood lightens somewhat. (Hartley Kemp’s dynamic, atmospheric lighting is integral to the performance.) The cast quiver, they tremble; one appears to mourn the loss of a child, rail silently against their grief, pick up an invisible something and put it in their pocket…

The audience can interact at this point, giving hugs, interlacing hands, or following and mirroring a cast member’s movements.

At the end we are again awash in theatrical haze and there is dramatic red lighting, and the dancers slowly, eerily file out.