The latest work from Perth’s pvi collective encourages you to break free from accepted modes of thinking about place, routine, and expectation.
Zoe Barron
[This is archived content and may not display in the originally intended format.] 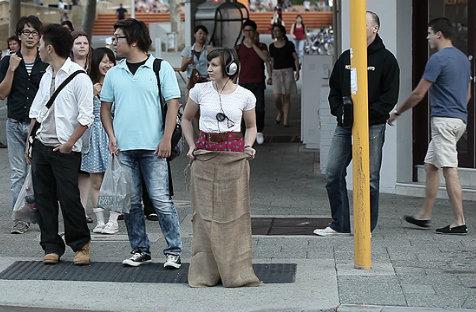 At some point between birth and adolescence, we become aware that other people are watching and judging us. We learn to be self-conscious. Deviator, the latest work from Perth’s pvi collective, attempts – and I would say succeeds – to reverse this process with a playful and highly interactive work that is far  more game than performance.

After reporting to PICA, participants are given a smartphone and a set of headphones. ‘Are you ready to turn your city into a playground?’ the people at the desk ask before handing over the equipment. These items function very much like the headphones at a silent disco: encased in your own little bubble of sound, it is suddenly OK to be silly in public.

Deviator consists of a series of games activated by QR codes hidden within a kilometre or so radius of PICA. Once scanned, the codes set off a series of audio instructions explaining a task you must complete in order to gain points. Most are clever adaptations of children’s games: there’s a sack race over the William and James Street traffic light crossing; there’s Pin the Tail on the Donkey, where you have write a message on a small speech bubble chalk board; there’s a game of twister. For one, Quiet Time, the task is to simply do nothing for two minutes, just to see what it feels like.

There is also a moral to the story. The pvi collective has tapped into the collective apocalyptic assumption that there is some sort of ‘giant cluster-fcuk’ [sic] coming our way, and the games are a sort of small combat against it. Each game contains a philosophy on the theme of revolution; each is designed to deviate from accepted and normal modes of thinking about place or routine or expectation. Participants are encouraged to notice things they would otherwise automatically take for granted.

It’s incredibly effective. The headphones and smartphone reduce, if not eliminate, self-consciousness by giving participants a reason to pole-dance in public and run away from people in clown wigs, and by aurally separating you from the city. Participants are then reconnected to the space under a whole new set of rules for interaction. The work is amazingly clever at every level – from the overall concept, to the philosophies explored, to the individual games presented.

Being a complicated, technically-focused work, however, it isn’t entirely without glitches. Occasionally the GSP signal lags, just when you really need it not to, and sometimes the QR codes won’t scan. The session I attended nearly didn’t run due to technical difficulties, while I heard reports of the Motherfcukers – those who assist with the games – being absent at different times.

Deviator is also the sort of experience that won’t suit certain people or certain moods. Never have I come across a more immersive or interactive work, so if you’re not ready to approach the tasks with an open, participatory mindset, you may very well be left behind. If you let it, though, Deviator has the ability to swallow you whole, and I would highly recommend that you do. The work is fuelled by that most admirable of qualities: playfulness. Above all, Deviator is really, really fun.