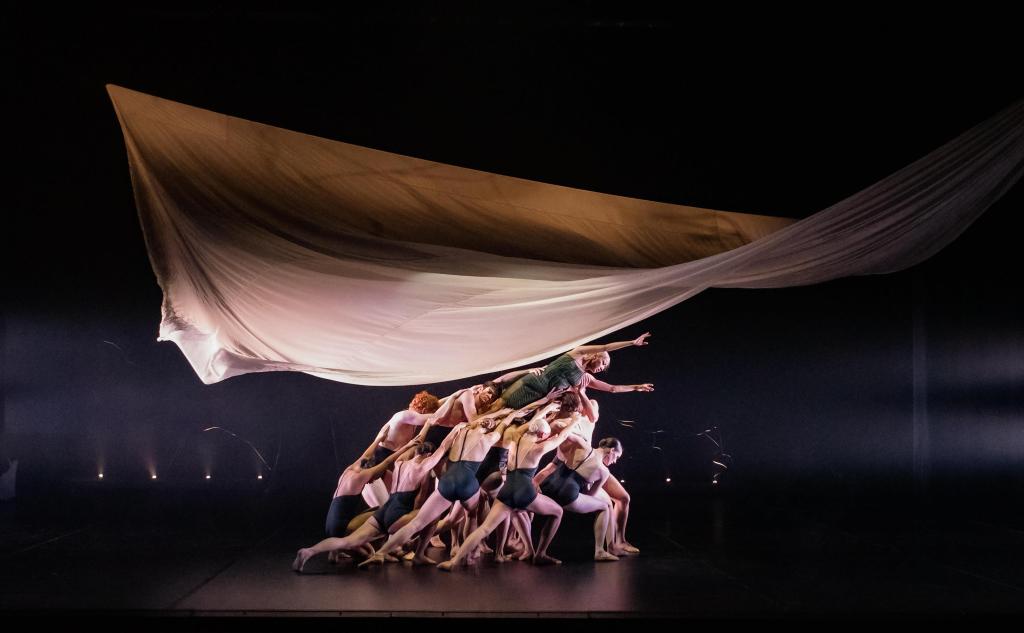 The sculptural form of Chihiro Nomura and other dancers of WA Ballet in Graeme Murphy’s Air and Other Invisible Forces. Photo credit: Bradley Photography.

The West Australian Ballet’s Artistic Director, Aurélien Scannella, has long dreamed of adding a contemporary dance season to its annual mainstage program, and this, its triumphant premiere run, signals the start of something special.

A triple bill of mid-length contemporary dance works may well have raised eyebrows for stalwart WA Ballet fans before the curtain went up on this new season. It takes courage and vision for a Director to point their loyal ballet audiences in a more ambiguous contemporary dance direction.

But this passionate move has paid off for the WA Ballet in its bold new season STATE, as their audiences revel in seeing WA Ballet dancers stretched to new limits and embodying new energies, which in some cases, gives powerful artistic expression to the here and now.

The first work on the bill is by WA Ballet company dancer Adam Alzaim and it’s a joyful 30 minute ensemble piece that the artist developed from a short work first presented in 2018. Entitled Gainsbourg, it is inspired by the vibes of the legendary French musician of the same name, and it bubbles with charm as the cast of 12 (six male, six female) play out a range of quirky characters over drinks in a smokey underground bar.

Alzaim’s choreography reveals a playful and masterly hand as he moves his lively guys and gals from their upstage seats to downstage positions, where they slide through various stylish formations and partake in some classy male/female duets.

It is a total joy to see WA Ballet dancers experimenting with comic characterisations as they deliver a range of Alzaim’s unexpected moves according to Gainsbourg’s sensual, syncopated melodies. At its best, it’s like an elegant French liqueur with a hint of Mambo miam miam thrown in. The beautifully tailored outfits of the dancers – designed by the choreographer himself – are also a notable accompaniment to Alzaim’s delightfully sharp, and at times satirical scenes.

Then, after a short interval, the onstage mood is plunged astonishingly into much darker, unsettling terrain, in a 25 minute work that is almost diametrically opposed to the previous jaunty number. Independent Australian choreographer Melanie Lane has conjured a completely mesmerising, yet deathly underworld landscape with eight of WAB’s dancers who she drives through states of unrelenting suffering and immense power to achieve her slick and accomplished new work.

Overall, it feels like a standout achievement in its design and execution. Led primarily by principal dancer Dayanna Hardy Acuña and soloist Juan Carlos Osma, Lane’s army of steely-eyed spirit warriors (including strong performances by Candace Adea and Nikki Blain) stalk the stage under some striking lighting states by Damien Cooper, and to a pounding soundscape by Christopher Clark.

These bodies most often move in highly structured, diagonal sequences that push them to surge, bend, extend and be lifted – all while remaining firm and unwavering in their focus. It’s a work that may challenge some in its menacing power and overwhelming strength but its undeniable that its cast of eight are completely on fire, as they haunt the stage clad in mesmerising costumes (by Akira Isogawa) which add another wonderfully intricate layer to this sophisticated work.

Interestingly, as we prepare for the final piece in this triple bill show, the audience’s energy seems to have waned. Three dance works in one night is a sizable helping, and somewhat sadly, the show’s final offering – a 45 minute excerpt of Graeme Murphy’s iconic 1999 piece Air and Other Invisible Forces – appears to suffer from its place in the queue.

The lilting, elegiac tone of Murphy’s sculptural piece is delivered well by its sizeable cast, who journey through the work’s four movements under the beautiful lighting states by Damien Cooper, which casts shards of shape and shadow over the work’s enormous billowing silk-sail set piece designed by Gerard Manion.

Soloist Julio Blanes is especially hard not to watch whenever he appears in this poetic work. Clad in black, and moving with incredible poise and precision, his is a commanding and moving presence. Yet, ultimately, Murphy’s piece, which we are lucky to see (in the only time it’s being performed outside Sydney Dance Company), feels very much of its time (the late 1990s), and doesn’t match the fervour of the first two works.

Overall, this season is a beautiful, high quality gift from WA Ballet, whose dancers – the 24 of them who appeared in this show – are on target and in fine form, signalling that they, and the company, are well placed to solidify this dynamic season within WAB’s annual program.