Nine dancers keep the beat with nine drummers in this explosive celebration of timing and choreography.
Vicki Renner 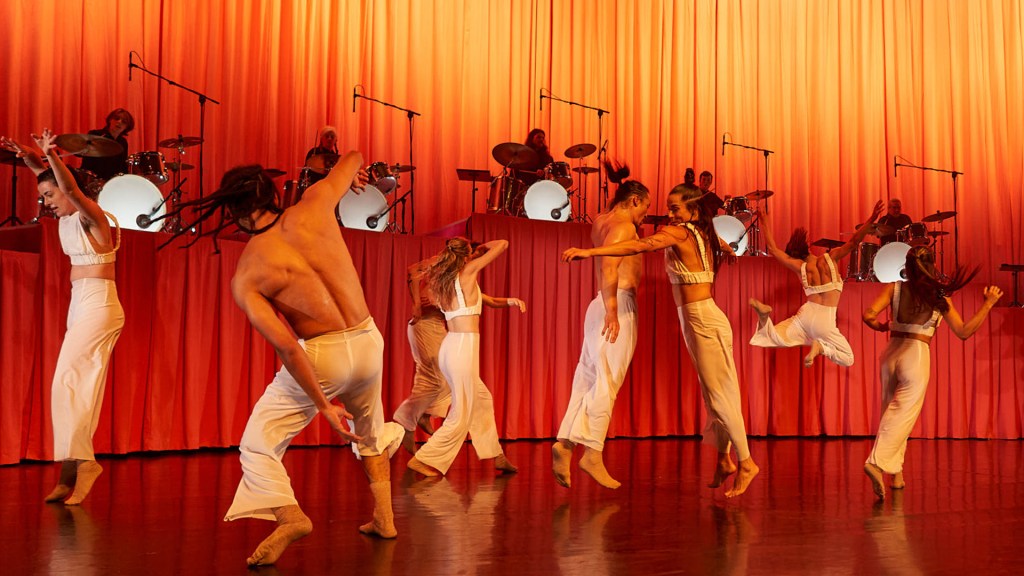 ‘Manifesto is a riot of movement, sound and precision.’ Photo by Sam Roberts and Roy Vandervegt.

Manifesto is an exuberant hour of dance, drumming and light that left us breathless and whooping with joy. Showing as part of Melbourne’s RISING festival, Manifesto is the latest offering from Stephanie Lake Company. This is stripped back contemporary dance that speaks to the sheer joy of movement matched only in precision by powerful drumbeats; a single hour of breath-taking invention will stay with me for a long time.

Working with only each other, the stage, and sometimes their chairs, nine dancers twist, contort and fling themselves through the air in a tightly choreographed, wild dance. Raised on a dais above the stage are nine drummers who work together like a machine rather than nine individuals. From a slow, staccato build-up, the drums rise to a crashing crescendo that nearly had us on our feet. Each drummer is lit by perfectly timed blasts of light. If the drummers are part of a single machine, so too are the lights, as if the on/off switches are connected to the drums.

Using every part of the drum, cymbal and other percussion instruments, these musicians create the sounds of insects, of mechanical things breaking down, of a rising tornado. Each drumbeat, each sound is matched below by bodies contorting into carnival clown masks or forms frozen in action or creatures emerging from the dark, blinking in the sun. There’s humour, pathos, fear and awe in those twisted, frozen forms as each body’s pose echoes the power and precision of each drumbeat.

Throughout Manifesto, each dancer has their own moment in the sun, from the lone wolf prowling the stage, taking selfies with a drummer, encouraging the drummers towards a solid festival of sound, to the single performer guiding the others through a surging dance that mimics waves on the beach. Each solo dance showcases a different style, a different way of interacting with the drums, presenting the range of dance tradition, from ballet to breakdance.

The most moving piece was held by one dancer on her own, her body a broken marionette that struggles to be put back together. Each piece of her body seeks to connect with its other parts in this tortured dance that speaks to the desire to be whole. Gradually, two male dancers surround her, their moves gentle, until her disjointed twisting is calmed and she’s able to move in sync with them.

When the drummers take centre stage in a tightly controlled series of rolling drumbeats, it’s an explosive, exquisite show of talent and timing. One single beat at a time, lights flash on and off to spotlight each individual drummer, who plays a short, seemingly disjointed piece. As the pace increases, the individual drummers are revealed to be part of a wild, crashing whole that becomes a long sinuous sequence of drumming played with incredible precision.

A special mention must also go to the costume designers. The dancers first emerge in tightly controlled costumes with thick black straps that reminded me of military drummers. In their second costumes, the dancers are sexy and glorious, stripped back to minimal clothing as they dance and grin their way through a powerful wall of sound. I was reminded of free-form dancing around drum circles at a festival. The final costume arrangements are unique to each dancer, with lace and flowing fabric juxtaposed against the strength of their bodies.

Manifesto is a riot of movement, sound and precision, an ode to the drumbeat of life, a reminder that there is joy in movement and freedom. After two years of lockdowns and restriction, this show was the antidote. There’s nothing like Manifesto out there, and Stephanie Lake’s choreography is extraordinary, unique and evocative. Manifesto reminds us why we’re alive, in all our messy, beautiful, pained existence. There is joy among the chaos. If Manifesto comes to a theatre near you, don’t hesitate to book tickets for you and all your friends.