The return of a veteran conductor at the ASO makes it seem almost like the good old days.
Dr Diana Carroll 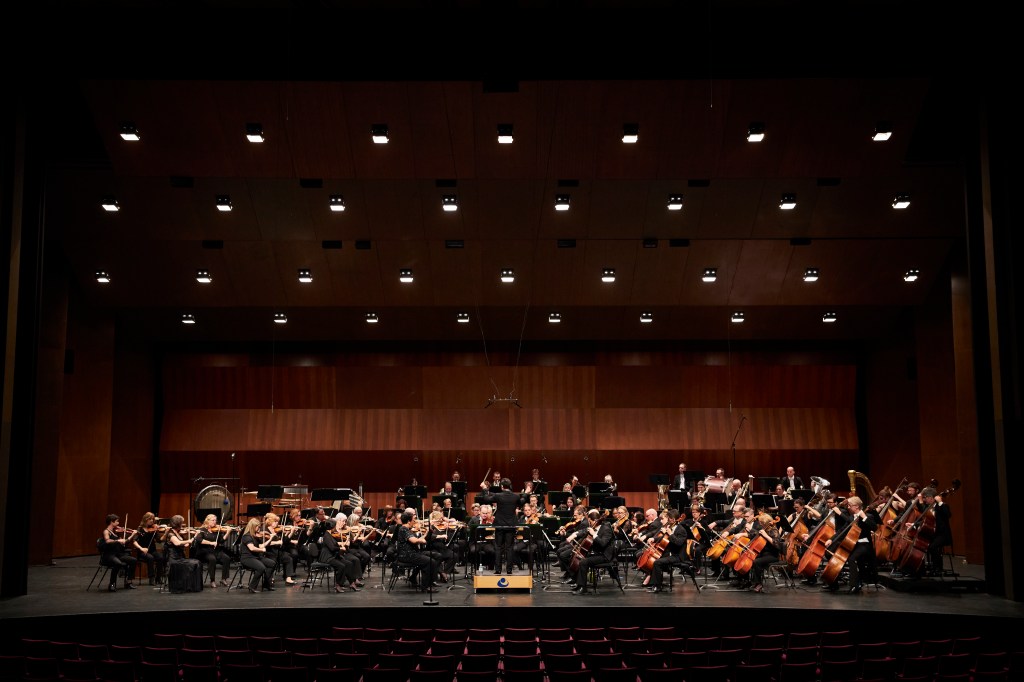 ‘With the full complement of players back on stage, the audience was dazzled by the ferocious determinism of the score.’ Photo: Chelsea McEwin.

There was something special in the air as the audience returned to the Adelaide Town Hall for the ASO’s Symphony Series 4 concert. The chilly evening couldn’t dampen the palpable enthusiasm, even if the chequerboard seating and mask-wearing did rather change the experience. And the bar was open, so it was almost a return to the good old days.

This concert was to have been conducted by Simone Young but travel restrictions meant that wasn’t to be. Once again, veteran conductor Nicholas Braithwaite was on hand to take up the baton. It really is a delight to watch someone with such an impressive depth of musical experience and understanding. Soon to celebrate his 82nd birthday, Braithwaite may walk more slowly to the podium, and sits rather than stands, but his command of the orchestra is as powerful as ever. And there is a clear respect and affection from the players for ‘Nick’, once Chief Conductor of the ASO; the high regard for him does seem to bring out their best.

The concert opened with the brief musical acknowledgement of country Pudnanthi Padninthi II – Wadna (‘The Coming and the Going’), by Indigenous composer Jamie Goldsmith that has become the norm now at ASO performances.  With sensitive orchestration by Mark Ferguson, this is an engaging and emotive tribute to the land and its people.

And then it was down to business with the dramatic Prelude to Act 1 from Richard Wagner’s opera Lohengrin. This piece begins and ends in nothingness, but in between there is the full build-up of Germanic dramatic opera. It may only be ten minutes but it has a mighty impact. This is due in no small measure to the expanded string section and Braithwaite is indeed an experienced Wagnerian conductor.

The Wagner was a substitute for a new work by Tasmanian composer Mary Finsterer, programmed as part of the ASO’s commitment to feature a female composer in each concert. Unfortunately it could not be performed due to a contractual arrangement with the Sydney Symphony Orchestra for its premiere performance that now has been delayed due to concert cancellations.

There was a brief pause as the orchestra was repositioned and then we were into Mozart’s Symphony No.35, known as the Haffner.  Each of the movements has a distinct character, from the manicured first to the rousing fourth, and each was given a joyful and exhilarating expression by the ASO.

After the interval, it was down to serious business with the superb Pathétique, Tchaikovsky’s Sixth (and last) Symphony, first performed only weeks before his death in 1893; its second public performance was to be at the composer’s funeral.

With the full complement of players back on stage, the audience was dazzled by the ferocious determinism of the score. This is bold, dramatic music writ large and one that has been subject to much conjecture by scholars as to its deeper meanings. It is not without good reason that Tchaikovsky has been called ‘the master of grief’ and this Symphony is often considered his greatest work.

The Pathétique makes strenuous demands on the players, especially the intense allegro molto vivace third movement. More than one player was seen mopping their brow at the end of that one!

Together, these three pieces explored a vast range of emotions and described the human experience in superb musical form. It was all given life by an orchestra on the top of its game and a maestro who knows that sometimes you only need the smallest gesture to reap rich rewards. Bravo indeed.

Symphony Series 4 was performed at the Adelaide Town Hall on 12, 13 and 14 August. It will be broadcast on ABC Classic at 1pm on 26 September.