A flag-raising tribute to a night of classical favourites.
Barbara Booth 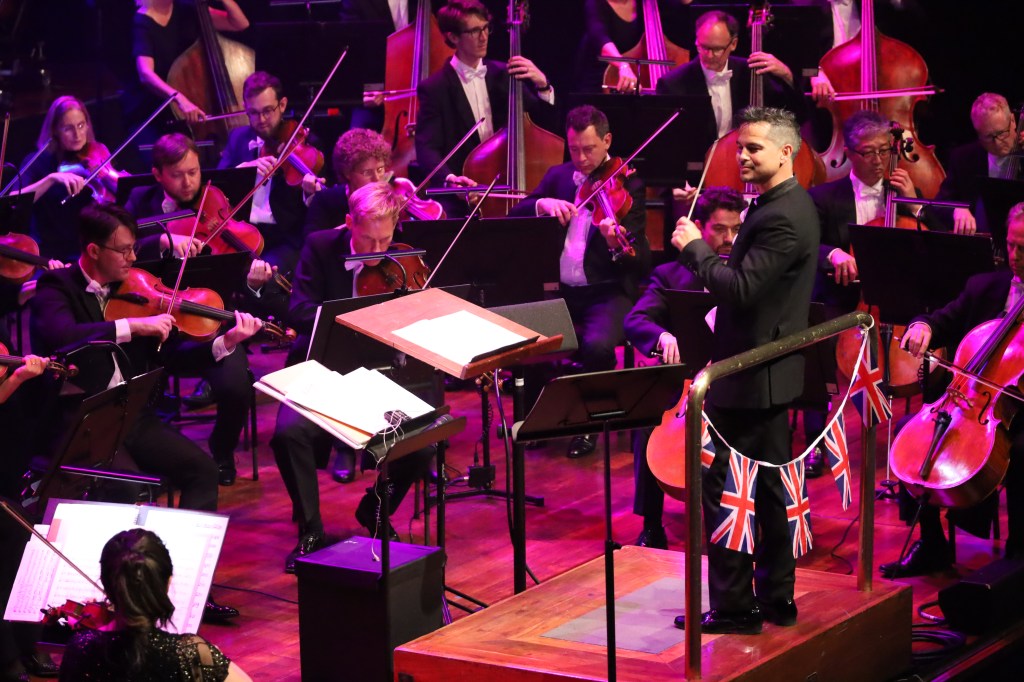 ‘Horses could have pranced across the stage on the back of the enthusiasm and Queen Elizabeth herself would have been delighted!’ Picture supplied.

Since 1895, The Last Night of the Proms has been a tradition entrenched in the psyche of British people. From the French word ‘se promener’, meaning to walk or promenade, Last Night was meant to be the final evening of an eight-week season of mainly classical music concerts and events, especially designed for people to enjoy as they strolled through London’s beautiful parks and gardens. The Royal Albert Hall became a centre for the concerts, with cheap seats so that everybody could attend and thus, Last Night would always be sold out. As London has recently been confirmed as the world’s first National Park City, this exemplary tradition is definitely here to stay.

Friday night’s concert in Western Australia’s Perth Concert Hall continues this cultural institution. An incredible line-up of talent graced the stage and the seats, behind which held members of the WASO Chorus. It was unfortunate that the original conductor, Guy Noble, could not attend because of COVID in New South Wales but ‘The Great Dane’, otherwise known as conductor Dane Lam, was an excellent replacement. What an unexpected treat was Lam, who had flown in from his recent appointment as Conductor of the Queensland Symphony Orchestra after several years as Principal Conductor of China’s Xi’an Symphony Orchestra.

Flags decked the proscenium arch, bright lights beamed and gleaming trumpets introduced Franz von Suppe’s Light Cavalry Overture. Horses could have pranced across the stage on the back of the enthusiasm and Queen Elizabeth herself would have been delighted!

Franz Liszt’s Muller-Berghaus ‘Hungarian ‘Rhapsody No. 2’ and Aram Khatchaturian’s ‘Sabre Dance’ kept the momentum going as Lam’s energetic conducting moved seamlessly from sweet violins to exultant percussion with enough bells and whistles to send the audience into laughter and applause. The WASO Chorus played a major part in the evening, with Guiseppe Verdi’s Aida’s ‘Triumphal March’ in the first half and Richard Wagner’s Hutschenruyter of ‘Ride of the Valkyries’ and Bedrich Smetana’s ‘The Bartered Bride, Act 1’ in the second half.

Read: Book review: How to end a story, Helen Garner

Soprano Rachelle Durkin was in complete command of her beautiful voice as well as elegant in a long evening dress. Durkin also sang Marie’s Bel Canto solo in Gaetano Donizetti’s La Fille du Regiment: Salut a la France, in the first half and, in the second, ‘Casta Diva’ from Vincenzo Bellini’s Norma. Durkin has incredible range in her voice and a comedic style well suited to the period. She also did justice to Leonard Bernstein’s ‘Glitter and be Gay’ from Voltaire’s Candide.

The WASO provided the perfect accompaniment under the baton of conductor, Lam, who’s also Associate Music Director of Opera Queensland. However, I felt that the overall length of the program, which ended with three encores, could have been served better with the exclusion of the last two pieces that gave opera a dominant role in the overall program and could be a little overwhelming for those who could not understand the lyrics. If remaining true to the original concept of the Proms were the objective, new pieces could have been introduced instead.

Some things, nevertheless, must remain the same and there would have been rebellion in the camp if Henry Wood’s Fantasy on British Sea Songs, Sargent’s ‘Rule Britannia’ (with Durkin draped in the British flag), Hubert Parry’s ‘Jerusalem’ and of course, Edward Elgar’s Pomp and Circumstance No.1 ‘Land of Hope and Glory’ had not been included.

For nationalist fervour these classics are hard to beat and the audience rose to their feet as one, waving flags, singing their hearts out as streamers and confetti reigned down and searchlights split the darkness as a shrill whistle pierced the air from the back of the orchestra.

In another century-old tradition, Guy Noble appeared on the big screen again to give his hilarious, cleverly adapted, rendition of ‘When I was a Lad’ from HMS Pianoforte by Gilbert and Sullivan.

Some of the snappy witticisms by both conductors made passing reference to our border controls in WA. Let’s hope that we can soon welcome people from other states to experience the absolute joy of hearing our West Australian Symphony Orchestra at its best, performing alongside amazing talent.

Barbara Booth became a Teacher Librarian when she had two small children to support. then a TESOL teacher and, finally, a freelance journalist for 27 years, published nationally in newspapers and magazines including The Melbourne Age, The Canberra Times, The West Australian, Qantas Club magazine, Home Beautiful, Paspaley magazine, Limelight magazine and 50 Something. She also wrote reviews of classical and jazz music, theatre and ballet for six years for the ArtsHub website. On May 25, 2021, as an author, she published a children's book called MY NAME IS PALOMA which is now widely distributed in Perth, Western Australia and on Amazon. She is based in Perth where she enjoy Scrabble, family and playing the Ukelele.