A superb display of the immense appeal of chamber music from a unique British ensemble.
Dr Diana Carroll 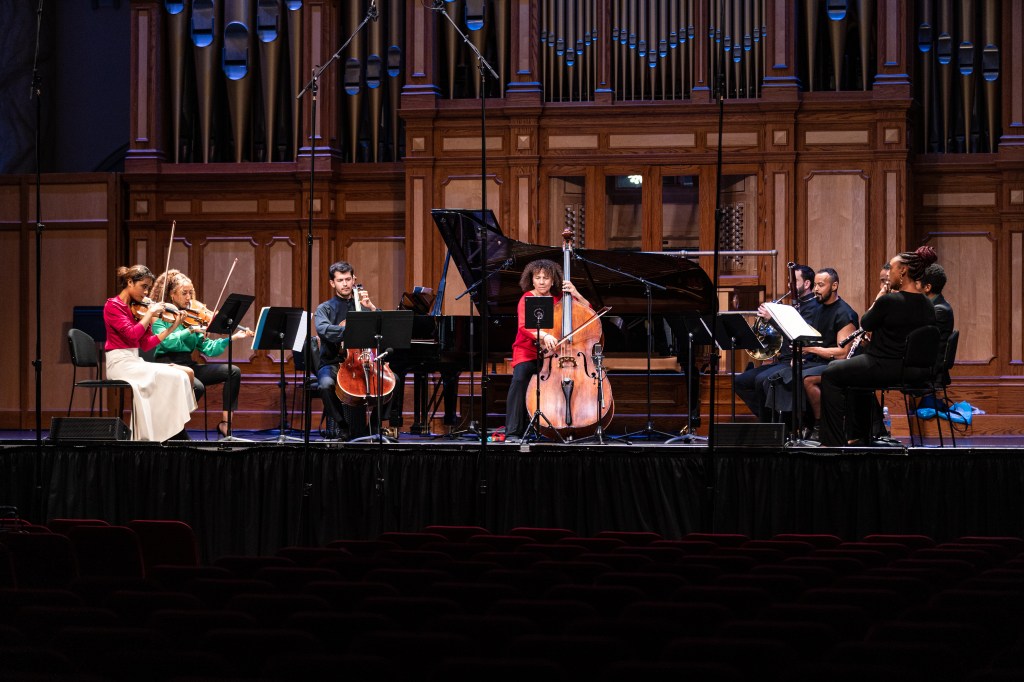 ‘The sheer joy and passion of Chineke! is incredibly appealing.’ Photo by Andrew Beveridge

There have been some remarkable highlights in this year’s Adelaide Festival. The powerful Watershed, the stunning Golden Cockerel, the magnificent Dorian Gray, and now the impressive Chineke! Chamber Ensemble.

Overcoming the immense challenges of organising an international arts festival during COVID, with the vast uncertainties that it entails, artistic directors Rachel Healy and Neil Armfield AO delivered a memorable program. And that’s without even mentioning Adelaide Writers’ Week and the superb Biennial at the Art Gallery of SA.

There were two performances by the UK-based chamber ensemble Chineke! at the Adelaide Town Hall as part of the Adelaide Festival. Chineke! prides itself on championing ethnic diversity in classical music performance, both in performance and composition. They always endeavour to expand the chamber music repertoire with the commissioning of new works by black, Indigenous, and ethnically diverse composers.

Each of the Adelaide performances featured a different program of chamber music and showcased a new Australian composition. The ensemble is a selection of players from the full Chineke! orchestra playing here in Australia for the first time. As Chineke! founder Chi-Chi Nwanoku OBE told the audience: ‘This is the furthest south we’ve ever played.’ Based on this excellent performance, we can only hope and pray that the full orchestra will one day make it to Australia.

Nwanoku, an accomplished double bass player of Nigerian-Irish heritage,  established the Chineke! Foundation in 2015 with the Chineke! Orchestra and the Chineke! Chamber Ensemble founded soon after. Nwanoku is regarded  as one of the leading contemporary double bass players and has performed with leading orchestras for over 30 years. In the Igbo language of Nigeria, the word Chineke means ‘the spirit of creation’. The aim of the Foundation is to champion change and celebrate diversity in classical music. It’s certainly something they managed to do with flair and determination.

Program Two, reviewed here, featured an exuberant mix of pieces, including a couple of old favourites, one lesser known piece, and that highlight piece, the new work by Deborah Cheetham. Chineke! commissioned two new works by Indigenous composers for these Adelaide Festival performances. These world premieres, by William Barton in Program One and Cheetham in Program Two, highlight the impressive talents of these two composers. Cheetham, a Yorta Yorta woman and acclaimed soprano, composer, and music educator, was on stage to conduct her new work, Ngarrgooroon. She was rewarded with thunderous applause from the Adelaide audience.

The program opened with the Folk Suite No 1, comprised of three short works by the African American composer William Grant Still. Written for flute, piano, and string quartet, these are beautiful pieces that echo all the traditions of folk music, with an unmistakably ‘world music’ flavour. The opening piano solo in Motherless Child was played with touching delicacy by Gerard Aimontche.

Next came the Nonet in E-flat major, Op. 139 by the German composer Josef Rheinberger. This is a beautiful work that begins gently with the strings before being joined by the winds and finally building to a triumphal finish. Written for four strings and five winds, there was a beautiful balance between the instruments, with lovely lines for the oboe and bassoon.

After interval, it was straight into the new work by Cheetham, played with no introduction but joyously conducted by the composer. The flute and French horn were especially soulful in telling the story of country. Ngarrgooroon is the sixth work in Cheetham’s Woven Song series.

And then the program was rounded out with The Trout by Franz Schubert, more formally known as the Piano Quintet in A Major. This is perhaps always associated with the stellar cellist Jacqueline du Pré and is so well loved. The ensemble gave a stunningly good performance, brimming with emotion but held together with a firm hand and great precision.

The audience was well-rewarded for its fulsome applause with a wonderful jazz homage to The Trout, played with immense verve. Nwanoku set the tone for the encore when she forcefully jammed her bow into the bridge of her instrument and played with passion in full pizzicato.

This was Chineke!’s Australian debut and they appeared thanks to the 2021-2022 UK-AU Season, the largest cultural exchange between the UK and Australia to date, celebrating the diverse and innovative artist communities and cultural sectors of each nation, organised in partnership with the British Council, British Council Australia, and the Australian High Commission in the United Kingdom. Nwanoku gave a special thanks to Festival directors Healy and Armfield for making it happen in such trying circumstances.

The sheer joy and passion of Chineke! is incredibly appealing and it’s easy to see how they can build the audience for classical music amongst young people and those who may otherwise never get to experience it live. A stunning performance and a perfect example of what an arts festival contributes to our cultural life.