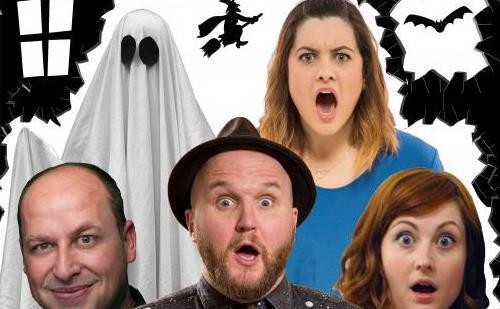 The overall theme of the Improvilicious 2021 MICF season is ‘spooky’. Image supplied.

Kids driving you nuts already these school holidays? A good G-rated, kid-friendly comedy act is Improvilicious. It’s a little bit hard to review this particular set-up however, because every show will be different. For those who’ve never seen the improv team at work, the format remains the same; it’s just the content that’s flexible. Two actors offer a six-part adventure tale, playing a number of random characters, with variables that change the storytelling and dynamic of each performance. Louisa Fitzhardinge and Jason Geary were the couple fronting up at our viewing. The overall theme of the Improvilicious 2021 MICF season is ‘spooky’ but it’s a fairly loose interpretation and really, anything goes.

A lot of the time it’s audience participation that drives the narrative and sometimes things can fly or fall flat because of the suggestions proffered. In the show we watched it didn’t feel as though the spooky tropes were well integrated into the overall tale. There was a setting in Hawaii and (solar panelled) coffins instead of surfboards yes, with Dracula and vampires also making their way into the tale (as well as Peter Parker, Batman, yarn bombing, and a lot of bad, bad puns).

A number of theatresports-style gimmicks are used, a different kind for each of the six segments: sound effects provided by the audience, the letter ‘s’ being banned from use, charade gesticulations and so on.

Despite their enthusiasm and energy, Fitzhardinge and Geary seemed to lose control of the material, which became shaggier and more convoluted as the hour-long show prevailed and it all ended up being just a little too messy and overwrought. Bringing coherence and stringing together sense from disparate elements is part of being a good improviser. Which is not to discredit their general aptitude – maybe the next day’s performance, with a whole different set of materials to work with, will be better.

Although the recommended age group is 10+, I’d say Improvilicious is best for middle-range primary schoolers and younger; or at least, those who enjoy silly jokes and broad, slapstick, physical humour. Despite the theme, there’s nothing overtly scary that will frighten the very little ones either, although on the other end of the scale, my 13-year-old companion smirked a couple of times but was generally too kool for skool at these types of loud, over-dramatic antics. As wholesome family entertainment for a young brood, Improvilicious is still worth checking out.