The search for a story and a great white whale: what could possibly go wrong?
Thuy On 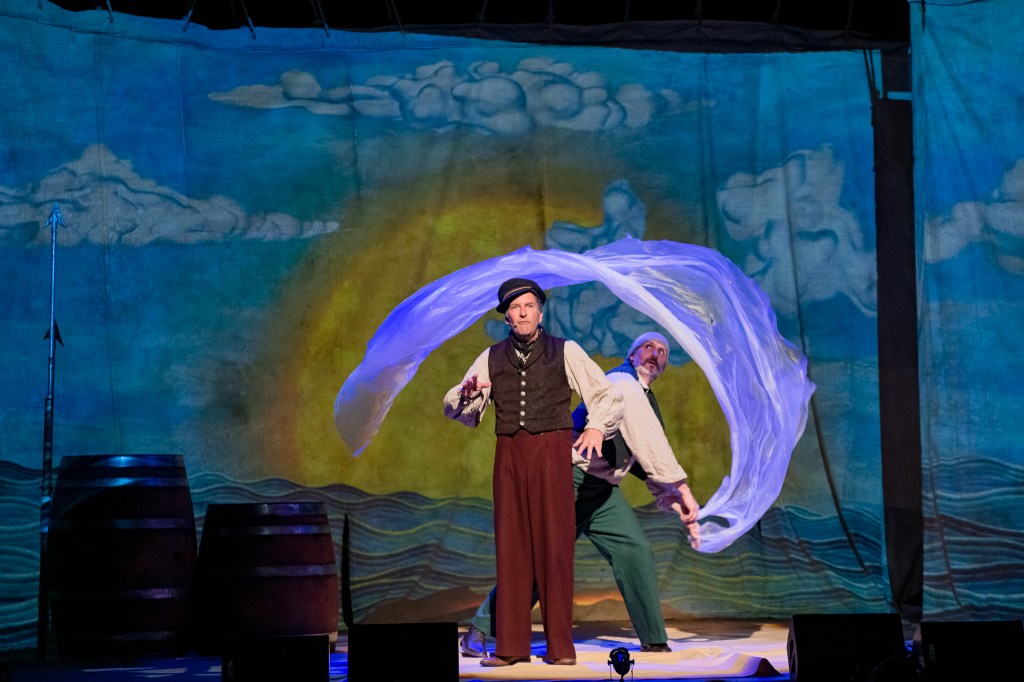 Colin Lane (Lano) and Frank Wood (Woodley) have performed their comedic schtick for many years, and with any great and long friendship comes a commensurate level of irritation borne of such a long-lasting relationship, a friction which is played for laughs in their latest show. For those who haven’t read the 1851 doorstopper (650 pages) volume by Herman Melville (or Healsville Melbourne as Woodley calls him), here’s a quick recap: Moby Dick is about Captain Ahab of the whaling ship Pequod, and his obsession to wreak revenge on the titular creature, a giant white sperm whale, who on a previous meeting, happened to bite a portion off Ahab’s leg. Ishmael the sailor narrates this whole crazy saga of how Ahab’s monomaniacal desire for retribution consumes him.

It’s a strange choice to base a comedy show on – this classic novel of adventuring in the high seas is many things, but funny it is not. However, in their inimitable way the lads do their best. Lano is the straight man to Woodley’s goofiness; they’ve set up this dialectic during their entire career of performing and it has never changed or waned. So, in this case, Lano, playing Ishmael, is trying to tell the grandiose and sprawling story of Moby Dick. ‘Trying’ is the operative word here as his offsider keeps on interrupting. Woodley channels the energy and disruptive anarchy of a toddler. He excels in being as annoying as possible and employs a visual comedy that relies a lot on his gangly-framed, childish wide-eyed wonder. [Cue carrier pigeon phones complete with the cooing noises]

On the night in question there were microphone issued but Lano and Woodley simply rolled it into their act. To be fair, the show was so slapstick-chaotic already that you didn’t even know whether the audio problems were scripted or not. Lano has a good voice, of which we are are witness to with his sea shanties and Woodley also has his trusted guitar. It’s easy to forget that these two are musicians too, among all the tomfoolery.

Don’t come expecting a coherent 19th century re-enactment of whaling practices, for the most part you just get two men being silly on stage: one trying to be a storyteller, the other his continual saboteur. It does become a bit tiresome to watch. There’s a couple of rum barrows and a video backdrop with rolling waves and other random images but not much else in terms of setting or stage design. Things, not surprisingly, get a bit surreal. At one point a squid costume is rolled out, and though there were limericks, and a badly-played tin whistle, luckily we had to put up with only one seamen/semen pun.

Lano and Woodley will be performing until 24 April 2022 at the MICF before touring to the Powerhouse Theatre in Brisbane on 11-20 August.