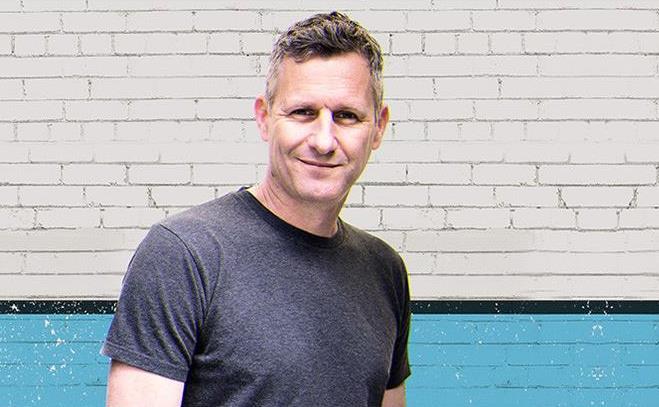 The host of long-standing game show Spicks and Specks has been called a ‘joymonger’. It’s a moniker well suited to him  because Adam Hills is such a genial fella. But don’t be fooled, his brand of humour is gentle and uplifting. But beneath the easy going manner is a man who‘s hardcore in his efforts to make you laugh. This was the show he was planning a year ago, but of course COVID disrupted its touring. Much to our delight, he did, however, spend a little time sympathising about the frustrations Melburnians felt during the longest, most stringent lockdown in the world (and picking on various other Australian states that missed out on this collective trauma).

The show’s title seems at first, to be rather odd but makes perfect sense when he explains for the few of us in the audience who don’t know, of his prosthetic right foot. Hills’ exploration of disability is disarming. It’s something that will either make you sunnier in disposition or more dispirited, he believes, and Hills falls firmly into the former camp, hence Shoes Half Full. His recap of his experiences in the disability league in England is joyful indeed.

Throughout the night Hill brings out rhyming ditties on little cards, helpfully designed to explain matters to the lecherous, racist, sexist or generally confused. There is after all, far too much shouting in the world that should and can be defused with rationality and humour. That’s the Hills mantra anyway, and it seems to work a treat. Even when he’s completely out of his depth, like navigating trans issues, Hills has the humility to acknowledge his ignorance and seek a better understanding.

But just when you think he’s getting a little too earnest, he becomes delightfully silly again; Hills is like a big kid, and his stories of the inadvertent hilarity of his young children are adorable. (Look out for the father-daughter Karaoke to an inappropriate Ed Sheeran song.)

Whether explaining his normal Zoom routine or rejecting a mariachi band while holidaying overseas, Hills’ brand of comedy takes the everyday and turns it into moments of unabashed joy. If you want to leave a theatre feeling good about the world and your place in it, Shoes Half Full is your show.

Adam Hills can also be seen at Sydney Comedy Festival on 30 April at the Enmore Theatre.