A smart, sassy adaptation of Frank Moorhouse’s seminal novel of the coming to age of Canberra.
Revelly Robinson
[This is archived content and may not display in the originally intended format.] 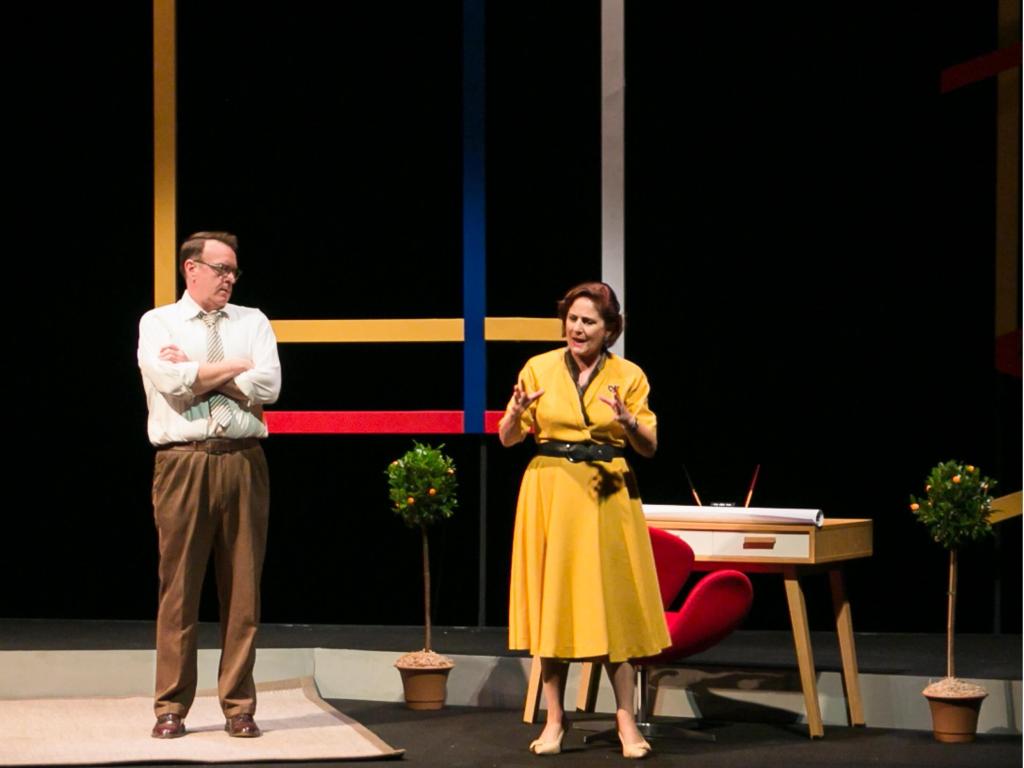 Edith Campbell Berry is no ordinary woman of the 1950s. Smart, provocative and harbouring a trove of secrets, her unconventional ambition to be the first woman diplomat representing Australia blasts a rude awakening across her male counterparts. Hobnobbing with Prime Ministers and high profile dignitaries by virtue of her position as the wife of a British diplomat, Edith has access to the most powerful people in the bureaucracy and government. She challenges those she meets to match her intellect and recognize her abilities by designating her to a position for which she is worthy, given her previous experience at the League of Nations. Instead she finds in Canberra, an enclave of men more eager to respond to her sexuality and to relegate her to administrative roles than willing to give her the respect she deserves.

The exception to the patriarchy is her husband, Ambrose Westwood. With his own androgyny and penchant for cross-dressing jeopardising his career, the British ambassador is simultaneously in awe and humbled by his luminary wife. In the stifling confines of Menzies era Canberra, theirs is a marriage of convenience more than anything else. The prolific and instantly recognizable, Sonia Todd complements a scintillating performance by Tobias Cole to portray a couple as intriguing as they are seductive. In Ambrose, Edith has found a match for her sexual wantonness, in addition to an excellent cover for her unbridled ambition.

Unexpectedly reuniting with her in Canberra, is Edith’s long lost brother Fred, played by Craig Alexander. His membership to the Communist Party is a fraught connection for Edith as she attempts to avoid controversy in paranoid Canberra. Together with his partner Janice, the pair attempt to enlist Edith’s assistance in the face of the conservative government’s aggressive opposition to communism in Australia. Despite her attempts to maintain a low key reputation, her relationships draw the attention of the intelligence services. An insidious visit from ASIO doesn’t fail to impress upon Edith the consequences of non-conformity in the capital. Upon her return to Australia, Edith must determine how she will navigate each of these political minefields, as she adjusts to a nation still struggling to find its place in the world.

Cold Light is as ambitious a production as the protagonist herself. Based on the final novel from Frank Moorhouse’s trilogy, the adaptation combines the audacious themes from the book with witty and euphemistically laced dialogue. Alana Valentine has the precarious job of drawing out the vital elements of Edith’s complex character into a performance of over two hours. Though the complexities of the era are likely to be lost on those not familiar with historical events, the script captures the essence of what it was like to mix in Canberra’s social circles. Interspersing the drama with poetry recitals and songs also adds to the flavor of life in the planned city. Once again, director Caroline Stacey demonstrates why she is such an asset to the Canberra theatre scene. The ensemble of an A-grade cast brings to the fore her expert direction, weaving together interactions of the various characters in Edith’s life.

With the exception of Sonia Todd, each cast member juggles a number of roles demonstrating versatility and range in their performances. The delightful Kiki Skountzos is a standout as the flamboyant Amelia, a German expat masquerading as Dutch. Oscillating between eccentricity and the calm demeanor of a female communist operative, Kiki brings pathos and empathy to one of the most complex characters in the play. Gerard Carroll also puts in a spirited performance as the effusive Thomas, an assistant in Edith’s office, and Richard, Edith’s lover and third husband. Nick Byrne juggles multiple roles as both Prime Ministers Menzies and Whitlam, in addition to the manipulative and shady Scaper who refuses to let Edith let go of her past.

Cold Light highlights the realities of a woman’s struggle to reach the top in a town that simultaneously embodies the capital, rural life and exile. With a character so multi-faceted and well-rounded that many have trouble believing she is a creation of Moorhouse’s imagination, the play sheds light on the difficulties one faces when their vision for the country does not align with the circumstances of the time. The result is an illuminating insight into how far Canberra has come from its past and a reminder of how much more it can achieve. Although the play will undoubtedly find the most favour with its home town audience, elements of Cold Light, and its depiction of an outsider’s struggle against incumbency, will nonetheless be universal to all those who strive in a struggle against mediocrity.