A true-blue exploration of contemporary Australian anxieties filtered through the lens of circus arts.
Richard Watts 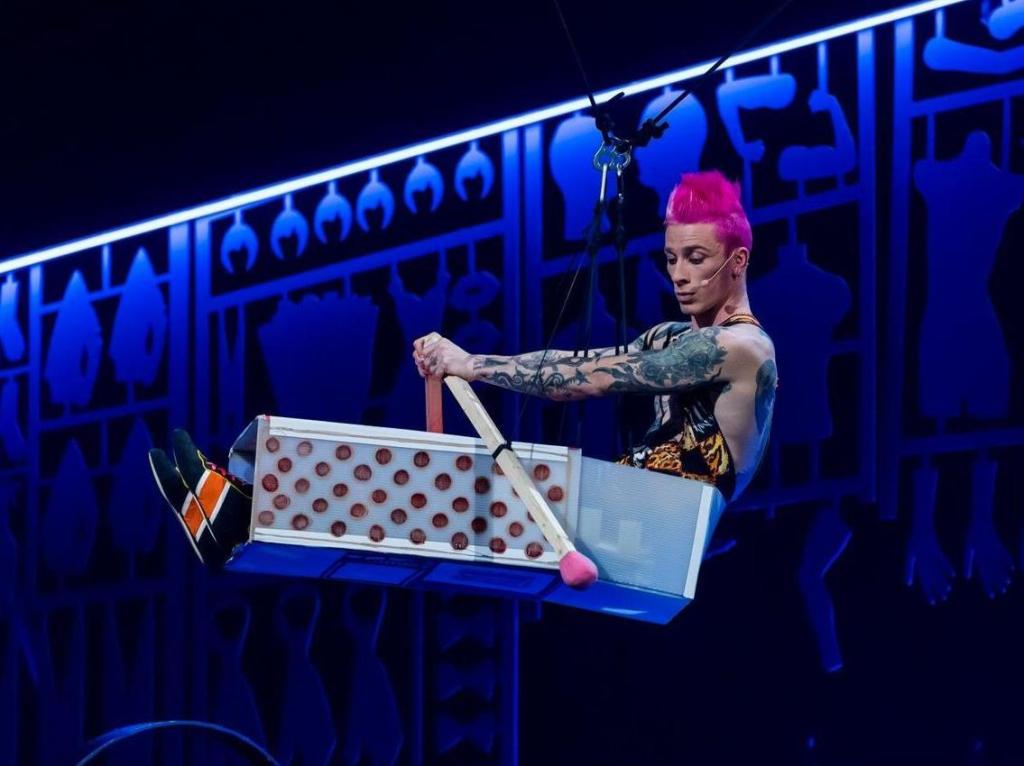 Rob Tannion commenced work at Circus Oz in April last year after over a decade working abroad, but Model Citizens is his first production for the company since taking on the Artistic Director’s role. In the intervening months, his plans for the company – collaborations with the likes of Die Roten Punkte and Casey Bennetto, and smaller shows created as offshoots of the main program (such as the raw but grounded Chasing Smoke, grown out of the Indigenous development program, BLAKflip) – have bubbled away behind the scenes.

After 14 months with Circus Oz, Tannion’s ideas for this landmark Australian company are finally on show in a mainstage production which blends the company’s traditional larrikin spirit with a striking new aesthetic.

Offstage, Tannion has already turned the company’s operating model on its head. Instead of premiering Model Citizens in Melbourne and then touring it regionally, the show comes to Melbourne road-tested and tightened after a three-month, east coast tour. It also takes advantage of the larger Big Top space to add five new members to the ensemble. The result is thrilling, delightful and judiciously paced, though occasionally forced or problematic.

Model Citizens invites us to contemplate the dichotomy between being ‘ideal citizens’ (in step with the government’s agenda and unswervingly loyal) and people’s individual natures and drives. Unlike plastic models from a kit, we don’t all fit in – and some of us, typified here by ‘professional unusualist’ Captain Ruin, aka sideshow performer Mitch Jones, actively strive to avoid the white picket fence suburban dream.

Jones is the closest Model Citizens gets to a ringmaster, opening the show with a reference to gender diversity and providing a charismatic through-line across its two-hour running time. His individual skills – fire-eating, escapology and knife-throwing – are put to good use, though the knife-throwing sequence feels unnecessary, included more because it’s an additional string to Jones’ bow rather than an essential part of the show. Conversely, his engaging presence – all tattoos, pink mohawk and garish costumes – are a lovely and considered counterpoint to the dominant aesthetic of the production.

The dominant tone of Model Citizens is blue – true blue rather than depressed, and with a hint of bawdy cheek which provoked squeals from children and laughter from adults. Giant props – a clothes-peg, a safety pin, a cotton reel, a match-box – highlight the extraordinary in the everyday; indeed, Michael Baxter’s designs are one of the real stars of the show. Costume designs by Laurel Frank are another high point, especially her flocks of sheep, which gambol gleefully across the stage and into the audience.

The peg becomes a springboard for acrobatic routines from Jake Silvestro, Lachlan Sukro, Steph Mouat, Luke Ha and Jones; the familiar Chinese pole routine performed enthusiastically by Ha, Sukro and Silvestro sees the apparatus turn into a larger-than-life safety pin. More than just props, the aesthetic is consistently and coherently integrated – a marked difference to the likes of 2011’s Steampowered, in which the steam-punk look felt more like window-dressing rather than an integral part of the show.

The company’s traditional socio-political elements are less successfully integrated. Sequences in which Jones struggles to pass a citizenship test, or an offhand comment about the assassination of Rupert Murdoch via explosive possums, feel somewhat forced. Conversely, Jeremy Hopkins song,’ “Who’ll come and worship my Weber with me?” is a glorious paen to the joys of barbeques while simultaneously referencing class consciousness and negative gearing. Similarly, a house-of-credit-cards routine performed by Ha is a fine balance of politics and artistry.

The band, led by Anya Reynolds, is in fine form, switching effortlessly from ethereal Dead Can Dance-style ambience to rambunctious fun. Olivia Porter brings a heightened sense of anxiety to what could otherwise be a familiar juggling routine and similarly an added sense of risk is added to Silvestro’s cyr wheel routine, thanks to other cast members rolling bowling balls at and past him. The acrobatics and aerial work – ranging from people dangling from a giant pair of undies to Tania Cervantes Chamorro’s skillful slings – are also of an excellent standard. Routines blend seamlessly (though there was a slight sense of the Chinese pole being sidelined) and the pace is swift without being dizzying.

One of the most memorable acts is also the most problematic. Alex Weibel Weibel’s performance on multiple slack ropes, incorporating balance and violin, is outstanding. It’s a star turn by a thrillingly accomplished guest performer. Unfortunately, it’s so virtuousic that it tends to overshadow the other acts; an unfortunate oversight in a company that has prided its egalitarian, ensemble approach to show-making for almost 40 years.

Tannion has clearly tried to integrate Weibel Weibel elsewhere in the show, though never entirely successfully. His presence highlights a real challenge for Tannion: how to evolve and refresh Circus Oz without losing those aspects of the company that have made it great. I can’t wait to see how the Artistic Director navigates that particularly tricky tightrope in the coming years.