A fabulous display of human feats of skill and acrobatics, as well as a great deal of humour and utter lunacy.
Antony Steadman 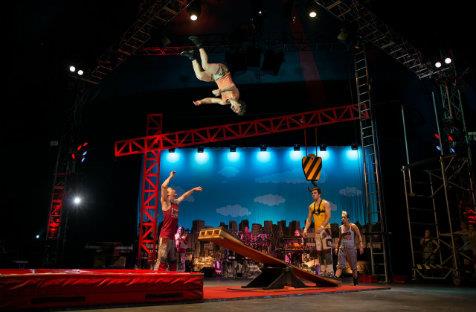 In their 35th year, Circus Oz are back in town with their latest show, a restructured and road-tested version of last year’s From the Ground Up. This time, the show feels a lot more polished and gives us more opportunities to see what makes this team so unique and successful.

Cranked Up is a display of human feats of skill and acrobatics, as well as a great deal of humour and utter lunacy. This is no pretentious French-Canadian arts cirque.

The live band adds a great atmosphere, and whenever cast members are not performing they are doubling as crew or members of the onstage band. This adds a real team environment feel to the proceedings.

It’s also interesting to note the company’s humanitarian efforts for the Asylum Seekers’ Resource Centre. It’s nice to see Circus Oz maintain their talents for circus arts, as well as being community focused and socially aware.

There is no real storyline here, apart from celebrating us as human beings. It’s a fabulous show; good clean fun for the whole family, and the sheer energy of the performers ensures that there is never a dull moment.

One of the show’s high points is the hilarious routine of ‘Fantaysia Fitness’ (portrayed by Flip Kammerer) and her rollerobics. She is fast becoming the face of Circus Oz. Not only does she maintain the humour, but she is a huge talent acrobatically.

The finale of Act One was another definite breath-holder, a trapeze act which ceased at the climax for ‘smoko’ then spectacularly returned to open Act Two.

If there was one weakness, it would be the fact that often, there is sometimes so much happening onstage at once that it can be a tad distracting. Too, the lack of overall cohesiveness doesn’t quite have the same sparkle as we have come to expect over the last couple of years, though the show’s theatrical focus provides an excellent excuse for escapism.

If there’s one thing to take home from the show, it’s a smile from ear to ear; a result of the pure joy emanating from the stage throughout the two hour performance.

Antony has been interested in theatre and performing since a very young age. His passion for all things theatrical extends to both on stage, in many shows with various companies, as well as directing independent works. He is keen on soaking up all that the varied Melbourne Theatre scene has to offer!