Virginia Gay as Calamity Jane is superb.
Lynne Lancaster
[This is archived content and may not display in the originally intended format.] 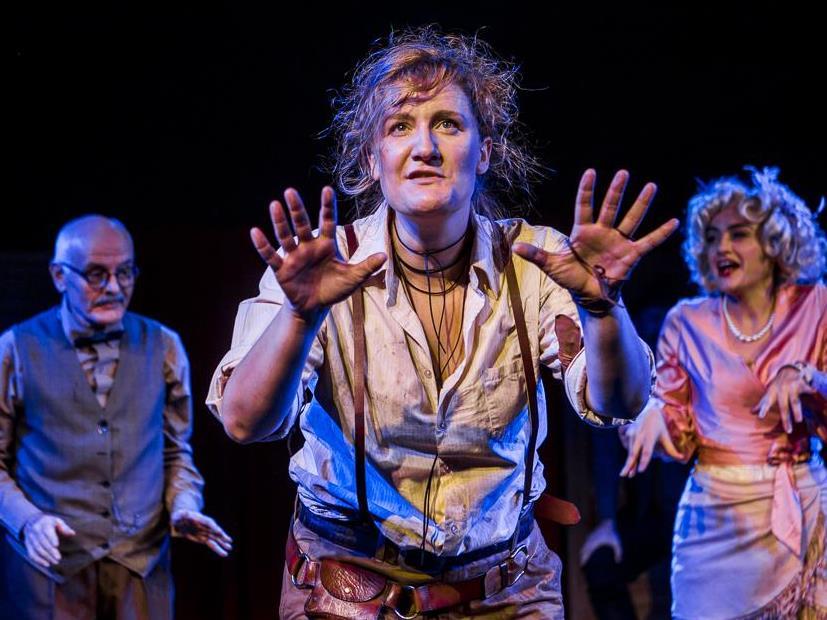 Thrillingly directed by Richard Carroll, the One Eyed Man Production’s Calamity Jane is part of the Neglected Musicals series that the Hayes presents and it set the theatre alight.

Calamity Jane is based on the 1953 classic film starring Doris Day and a rather light musical comedy similar in some ways to Annie get Your Gun. Calamity Jane tells a sanitised, somewhat fictionalised, family friendly version of a real-life, bold adventurous yet fragile and tough woman who ignored the expectations placed upon women to survive in the Wild West. The central story is a romance but with a couple of twists.

The Hayes has been transformed into the Golden Garter, a Wild West saloon with a few tables and chairs and a piano (some of the audience get to sit extremely close to the action and there is some audience participation by the way). Several of the small but dazzling cast double/triple up on roles and some are a quadruple threat (sing, act, dance AND play a musical instrument!). The show is presented in deceptively ‘rough and ready‘ style that reveals the finely nuanced scintillating talent of the entire cast. The comedy is presented with razor sharp timing and Cameron Mitchell’s snazzy choreography is tight witty and polished. Trent Suidgeest’s lighting a perfect foil for the production, Nigel Ubrihien’s musical direction was marvelous with the buoyant score performed on a single upright piano. Musically it ranges from vaudeville (Fryer’s ‘Ev’ryone Complains About The Weather’) to barbershop quartet (‘Adelaide’), soft ballads and also big show stopping numbers (‘Windy City’). ‘The Black Hills of Dakota’ is at some point heart stoppingly poignant and moving.

In some ways the show could be regarded as politically incorrect, with the way it referrers to First Peoples and it could perhaps be regarded as sexist – but Calamity and Katie give as good as it gets with ‘Men’ and the witty, ironic ‘A Woman’s Touch’ that turn the tables (and also possibly reveal Calamity’s feelings for Katie?). Carroll reveals that Calamity Jane is all about misjudged preconceptions – and not just regarding Calamity herself. Gender stereotyping is examined and the social mores of the times explored.

There are many similarities to Annie Get Your Gun but here it is fresh bold and as if written yesterday. Virginia Gay as Calamity is superb. On the outside she is a super-efficient, no nonsense frontierswoman able to handle any emergency with a deceptively gruff ‘manly’ appearance – who has great fun telling stories – but underneath she is a tender hearted woman who has a makeover and is revealed to be statuesquely beautiful and ultra-femine (and who falls for the man who is her rival). She can be shy, naïve, awkward, insecure and make social faux pas but she is also honest, touching, boastful, proud and at times very funny in a hugely warm hearted performance. In ‘A Woman’s Touch‘ as previously mentioned we see Calamity’s blossoming confused unspoken feelings for Katie, so when she sees Katie and Lt Gilmartin kissing it is a double betrayal!

Ultra glamorous Adelaide Adams (who has men falling at her feet), and blonde Marilyn Monroe bombshell like Susan were enchantingly played by Sheridan Harbridge. Wild Bill Hickock is dark and dangerous but with a hidden soft centre was brilliantly played by Anthony Gooley. His ‘Higher Than A Hawk‘ stops the show. We can see that the marriage between Bill and Calamity will in fact be a marriage of equals .There is verbal sparring like that of Beatrice and Benedict in Much Ado and ‘I Can Do Without You’ has similarities to ‘Anything You Can Do I Can Do Better’ from Annie Get Your Gun.

Fiery Katie Brown was deliciously played by dark, petite Laura Bunting who wins us over with her  ‘Keep It Under Your Hat’.
Rob Johnson as Francis Fryer enchantingly works his socks off as a marvellous song and dance man, hinting of hidden bigger opportunities, who enthusiastically reminds us that ‘Everyone Complains About The Weather’ and is forced to strut his stuff awkwardly in drag in ‘Hive Full Of Honey’. He also plays the tuba! Tony Taylor as Henry Miller the proprietor of the Golden Garter has a wickedly delightful time too. Lt. Gilmartin was thrillingly played and sung by handsome Matthew Pearce.

Go on treat yourself! Jump on the Deadwood stagecoach, head for the Golden Garter and book now.