Even if you’ve seen Cabaret before, chances are you haven’t seen it quite like this.
Patricia Maunder 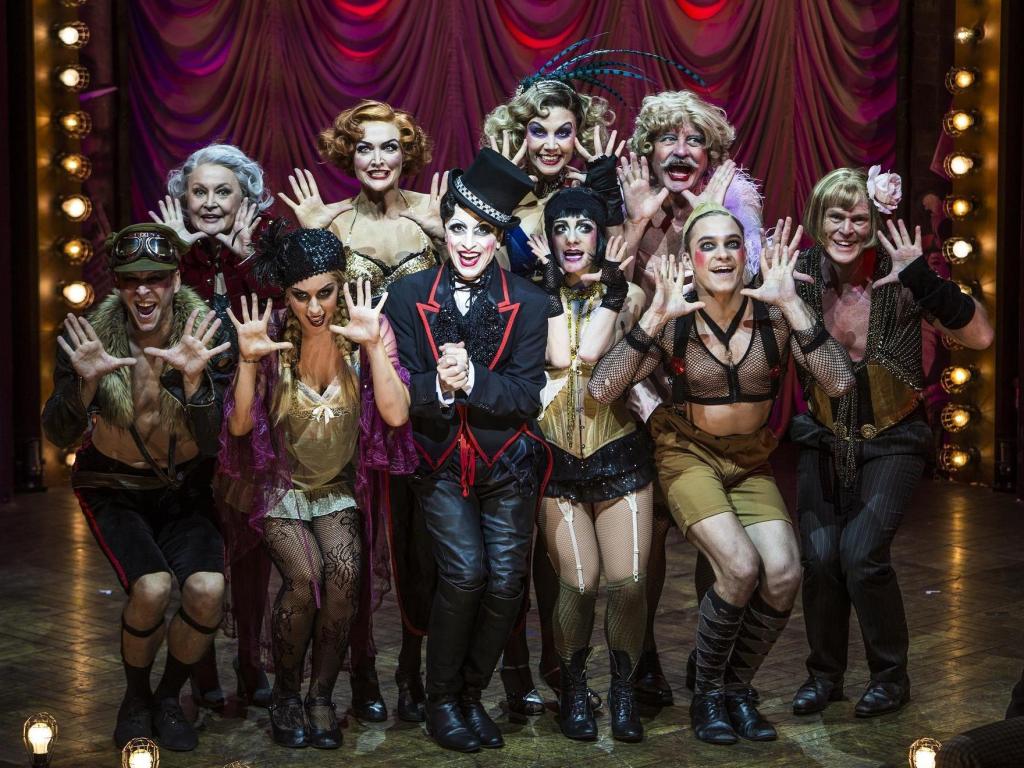 The opening of this Melbourne season of Cabaret  will always be remembered as the night when the title song was not just the figurative show-stopper everyone expected. It also marked the point when ongoing audio problems reached such a crisis that the show literally stopped. This technical disaster added another, unexpected layer of drama to Chelsea Gibb’s eventual performance of Cabaret’s song of defiance, in a show that was, like the sound, mostly good but sometimes patchy, due to cramped quarters and flagging cohesion.

Cabaret has been around in various forms over the decades, all diverging to a greater or lesser extent from Christopher Isherwood’s novellas about Berlin’s seedy underground during the rise of Nazism. This production is based on Harold Prince’s 1980s Broadway version (notably different to the most famous iteration, the 1972 film starring Liza Minnelli), and has been tweaked by director Gale Edwards for the Melbourne season following its recent Sydney debut.

So even if you’ve seen Cabaret before, chances are you haven’t seen it quite like this. The story focuses on Clifford Bradshaw, a young American who wants to be a novelist, might be bisexual, and is definitely swept up in the heady world he finds at the Kit Kat Klub and Fraulein Schneider’s cheap boarding house.

It’s a world of risqué nightclub performers, prostitutes, homosexuals, booze, drugs, poverty and, increasingly, desperation, as the Nazis ramp up the oppression of these social outcasts, as well as Jews such as greengrocer Herr Shultz. Cliff’s new best friends are Sally Bowles, an English showgirl of questionable talent, and the mysterious Ernst Ludwig.

Overseeing proceedings is the Emcee, played by Paul Capsis. This celebrated queer artist with Continental looks and capacity to push the boundaries was born for the role. Whether lithely moving in the spotlight, purring outrageously, or prowling around the stage’s gloomy periphery, he was like an omnipresent cat.

Gibb’s was also memorable. She sang and moved too well to give much credence to suggestions that Sally is a performer with more sass than talent. Not that she lacked sass, which was shot through with a melancholy that peaked as she began singing Cabaret with in-character and real-life trepidation. After the audio malfunction that stopped the show (Edwards actually called proceedings to a halt from the stalls), Gibb’s voice soared, just as Sally found her voice in a gesture of defiance. It was as if she made the technology work through sheer force of will.

While amplification of the cast was sometimes slow to kick in during the first half, it repeatedly crackled and dropped out in the second, including during John O’May’s poignant little solo. It was a blight on his bittersweet interpretation of Her Shultz, opposite Kate Fitzpatrick’s equally tragi-comic Fraulein Schneider. Jason Kos formed a solid centrepoint for the story’s mayhem as Cliff, Michael Cormick was suitably smooth as the Nazi in their midst, Ernst Ludwig, and with her timing and matter-of-fact delivery, Debora Krizak threatened to steal the show whenever she popped up as prostitute Fraulein Kost.

The addition of several supporting cast – including Matthew Manahan in fine voice for Tomorrow Belongs to Me – made the small stage-within-the-already-tiny-Athenaeum-stage very squeezy indeed. Although everyone moved with precision, and the chorus numbers were good fun, there was a sense that their style was being cramped.

On the upside, the small, hidden rooms in which their characters dwell were ably conjured by this space, as was the idea that all the world’s a stage: tiny cabaret-style tables were at the front and side, where the Emcee in particular lurked, watching the story unfold; and the tight little band led by Lindsay Partridge huddled at the back, mostly hidden behind a lavishly curtained, almost dollhouse-like proscenium arch.

James Browne’s set is the epitome of efficiency, yet there’s an appropriate sense of clutter and tawdry excess thanks to subtle, functional decoration, Rob Sowinski’s lighting, which shifts from moody to dazzling, and, in particular, Browne’s costumes. Lacy lingerie, leather, fur, fishnets, feathers and shimmering frippery scream Weimar Republic underworld.

There’s considerable talent on display in this Cabaret, but even without opening night’s technical problems there was a feeling that the show was on the brink, and not necessarily in a way that enhanced the narrative’s sense of doom.