When a light festival moves from a hodgepodge of projections to a solo exhibition of illuminated sculptures, is a refreshing re-think of the tourism model.
Gina Fairley 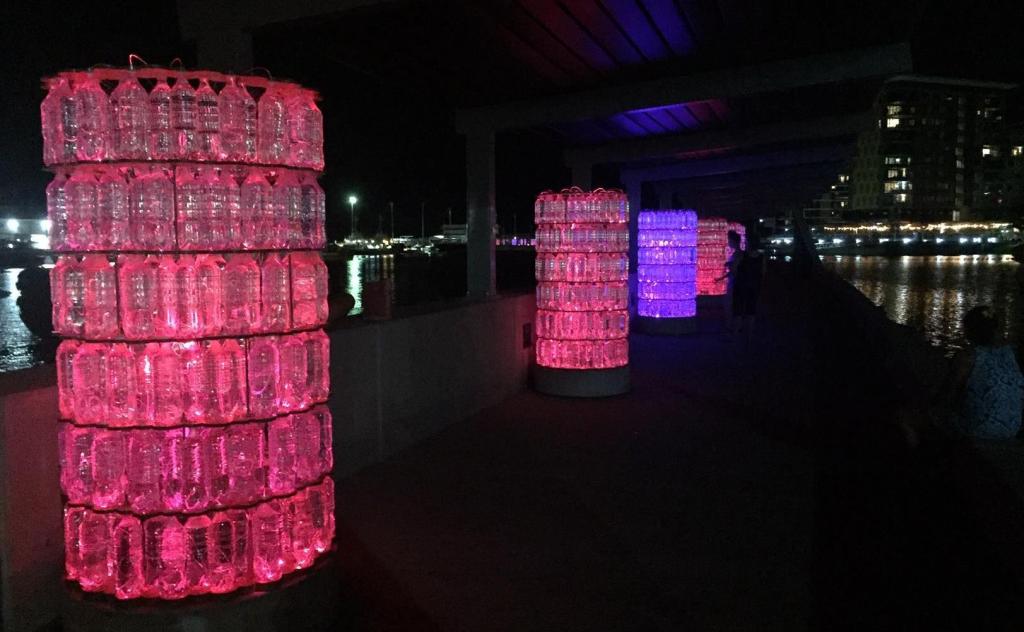 When we hear the words ‘wet season’ we think of sticky humidity, mozzies and crocs. But most of us in Australia have little experience of living through a Top End summer; our misconceptions not always a reality.

Tourism NT has sought to change that through the experience of art.

In a solo exhibition of light sculptures that peppers Darwin’s CBD and Waterfront precinct, British artist Bruce Munro captures the stories unique to this place, in his project Tropical Light.

Walking its 2.5km art trail of sculptures, Munro’s sculptures seemingly breathe colour into the landscape; their LEDs pulsing as if in conversation with the viewer, the soft evening breeze and languid, diffused heat is like a balm.

What sets this project apart from other light festivals – a phenomenon that has entertained audiences globally – is rather than the tech wizardry of architectural projections and a ‘hodgepodge’ of disparate works, Darwin has opted for a cohesive solo exhibition by Munro, that is more about nurturing connections than outright competitive spectacular.

It is a smart move. 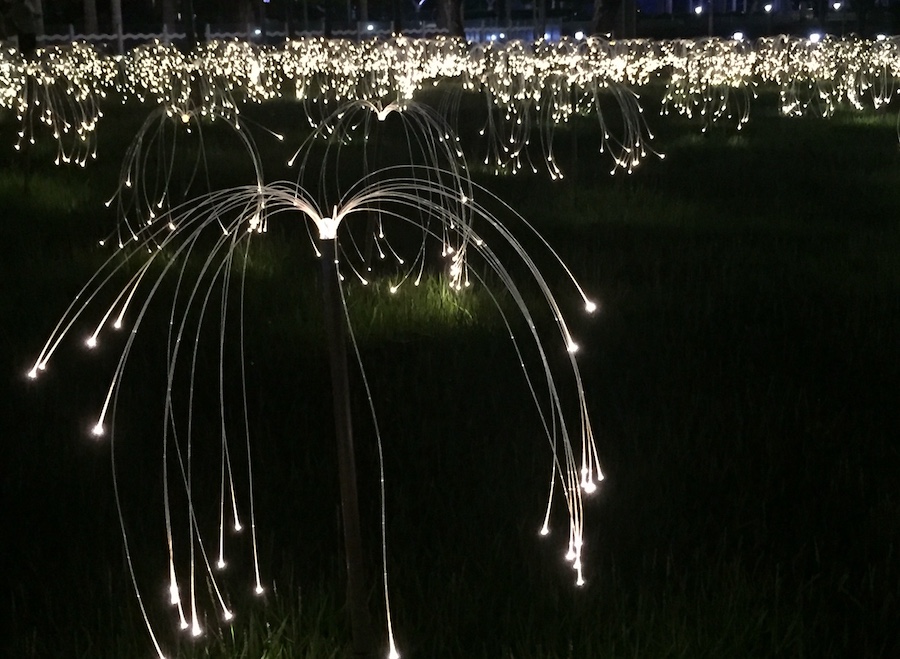 While the crowds at events like Vivid in Sydney and White Night Melbourne have drawn incredible numbers – Vivid had a record of 2.9 million while White Night Reimagined drew 700,000 people this year – these events have arguably become over-saturated and stale. There are even blog sites now offering tips on how to avoid their crowds.

While Darwin is aiming for some of that tourist crowd, it is presenting a very different event. And unlike, a lot of other light festivals, Munro’s sculptures also have a life during the day, not reliant on that 7pm ‘switch’. 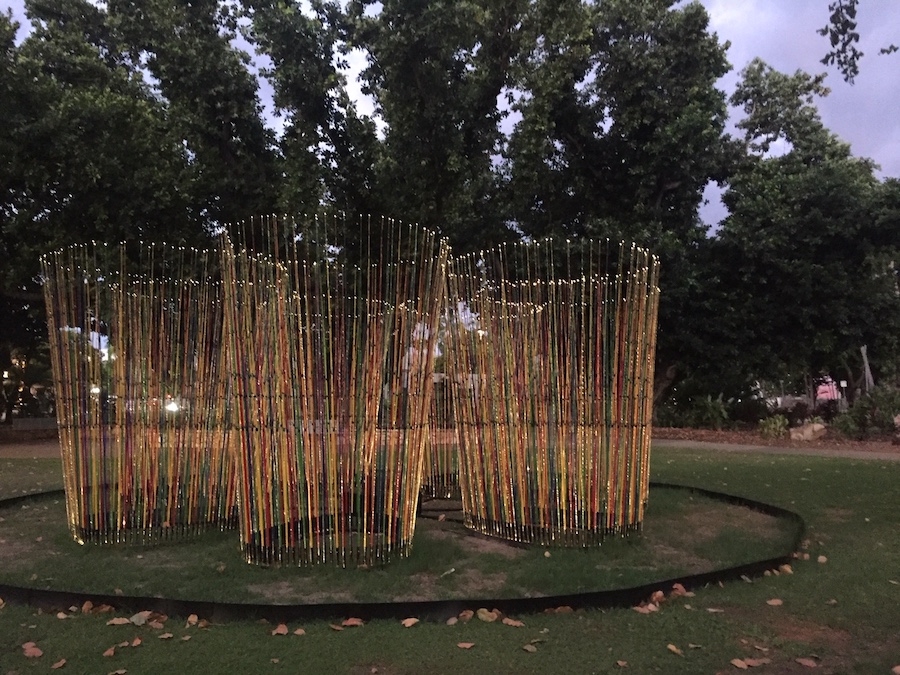 It takes its cue from Munro’s incredible success with his Field of Light, staged at the foothills of Uluru. It was installed in 2016 an was intended for a year-long showing, but has become a permanent fixture due to its appeal.

The destination saw a spike in tourist numbers of about 20% when it opened, and records 450,000 visitors annually. It has to do with its connectivity to people; for its capacity to engage and encourage us to think about our footprint on the landscape.

That same ethos and empathy is at play in Tropical Light, tapping into a new era of cultural tourism. The timing is interesting also, given that it opened just days following the close of the Uluru climb.

The AFR reports that the NT will hit $8 billion in debt by 2022-23. Munro’s show is part of a bigger $165.8 million four-year investment by the government, dubbed ‘Turbocharging Tourism’.

Tropical Light project is purported to have a $3.5 million price tag. It is a big investment for a smaller city like Darwin, but pales when compared to the likes of Vivid. I know which event I would prefer to visit. The intimate and connected nature of Tropical Light, and its embeddedness with a community, feels more human – and that is smart tourism. 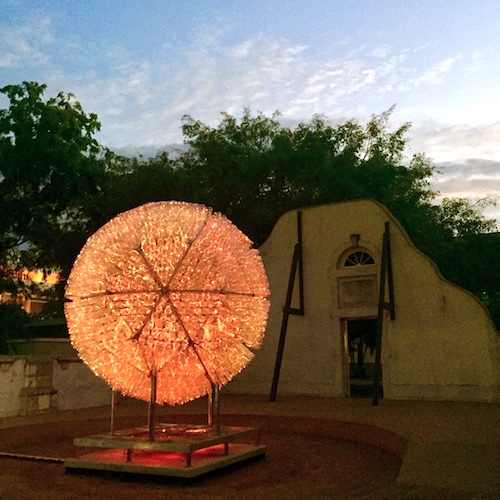 Moving beyond the plonk

Munro says that Tropical Light is not ‘about me plonking sculptures from (the) other side of the world’ and putting them in Darwin; the sculptures are inspired by Darwin.

Accompanying the nine sculptures is a downloadable app that adds another layer of storytelling to the project.  We hear the anecdotes behind works, such as Gathering of the Clans (2014), a field of Hills hoist lines with illuminated pegs – a metaphor for Australia’s colourful birds, complete with a sound track

Then there is Telegraph Rose (2019) constructed from 700 vertically oriented fishing rods, laid out in the form of the Sturt Desert Rose, the Northern Territory’s floral emblem. This work’s LED lights are animated by the first international Morse code message sent from Darwin. 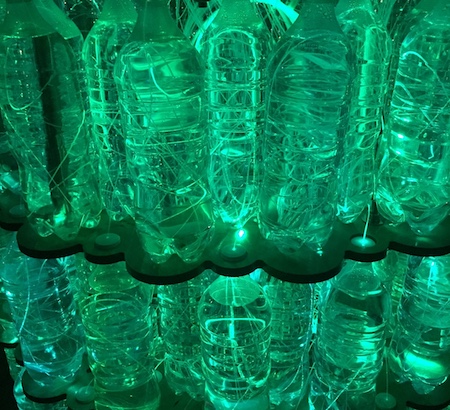 Water-Towers could be described as the signature piece for this project, comprising 30 sculptures threaded along the seawall of Darwin’s newest lifestyle precinct of restaurants and apartments.

It is inspired by the phenomenon of synaesthesia – the gift of seeing sounds in colour – and in that lies the heart of this project. It is a gift, and it wells from the everyday and its ability for awe.

The trail is a smart option also in the way that is pulls audiences into the CBD, reactivating the city in the wake of this new development.

The involvement of community has been paramount across Tropical Light. Five local artists are shown alongside Munro’s work – Bev Garside, Gloria Richards, Louise Denton, Paul Arnold and Shane Eecen – pushing against that FIFO celebrity artist mentality so often associated with festivals, but rather ensuring it is a two-way street.

The writer travelled to Darwin as a guest of Tourism NT.