Book review: Your Duck is My Duck by Deborah Eisenberg

Eisenberg can pack all the emotion and insights of a novel into a single short story.
Erich Mayer 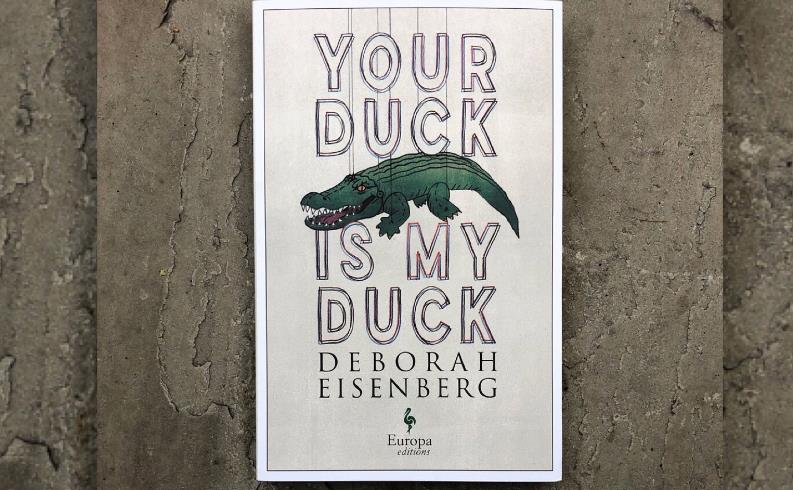 Book cover image: Your Duck is my Duck by Deborah Eisenberg.

With Your Duck is My Duck, Deborah Eisenberg manages the seemingly impossible: she can pack all the emotion and insights of a novel into a single short story. That is true for every story in this superb collection of six; each one sparkles with well-rounded characters who share their memories, uncertainties, hopes and fears with the reader.

In the eponymous story, an artist enjoys the patronage of an extremely wealthy couple who has bought one of her paintings. Their generosity to her is presented in stark contrast to the ruthlessness with which they conduct business. As the husband says to his business partners, ‘don’t think for a moment that if the boat is scuttled, I’ll throw you my rope. I’m sure you all recall the Zen riddle about the great Zen master, his disciple, and the duck trapped in the bottle? . . . It’s not my duck, it’s not my bottle, it’s not my problem?’ And it’s really not his problem when the results of his actions devastate the countryside and consequently ruin the lives of many. He can just pack up and go elsewhere.

The tycoon in the story ‘Merge’ is the CEO of SynthAquat Solutions, ‘the lord of irrigation and crops, who could divert rivers and move lakes, who could flood fields for thousands of acres or leave them to be scorched’. But he does not understand why his son, who is dog-walking for an elderly reclusive woman, does not wish to pursue a suitable career. The highs and lows of the son’s progress over a few months are like a pilgrim’s progress, although salvation does not necessarily lie at the end. Nor are insights into the life of the elderly woman neglected.

‘The Third Tower’ describes the brainwashing of a young woman in some unnamed horrible future. Told from the point of view of the woman – a simple, but far from stupid, person of limited education – it is a horror story presented as if what is happening is the most normal thing in the world. She is told to report to the clinic in the big city. After many tests, her doctor tells her that ‘our readings indicate a low correlation with the worrisome Malfeasance Index’ and it begins to dawn on her just what she needs to do to become an acceptable member of society.

The shortest, and perhaps the happiest of the stories is ‘Recalculating’. When Adam is mocked by his girlfriend, Carol, he wonders whether she has ever heard a word he’s said. He comes to the conclusion that perhaps he has never heard a word she said. But he is not troubled by his breakup for long.

Eisenberg frequently uses flashbacks and, while done in excess these can be irritating, that is not the case here. Rather, they lead to a progressive understanding of the events and people populating these tales, revealing details and complexities in captivating but never dull slow motion.

Eisenberg’s superbly idiosyncratic style throughout this collection reveals depths of meaning and nuances that invite, or perhaps necessitate, a second reading. For once, the dust jacket comments are, if anything, an understatement:

‘In Eisenberg’s world the forces of money, sex and power cannot be escaped, and the force of history, whether confronted or denied, cannot be evaded. No one writes better about time, tragedy and grief, and the indifferent but beautiful universe around us.’

But it is not only the subject matter that sets Eisenberg’s writing apart – it is a facility to convey complex and ambivalent feelings, self-doubt and ambition, loss and gain, pain and joy. She understands old age with its regrets and youth with its ambitions and serves it all up with a touch of humour. Who could want more?