This is a book about people who love chickens and about the chickens they love. Their stories are told in words and pictures.
Erich Mayer 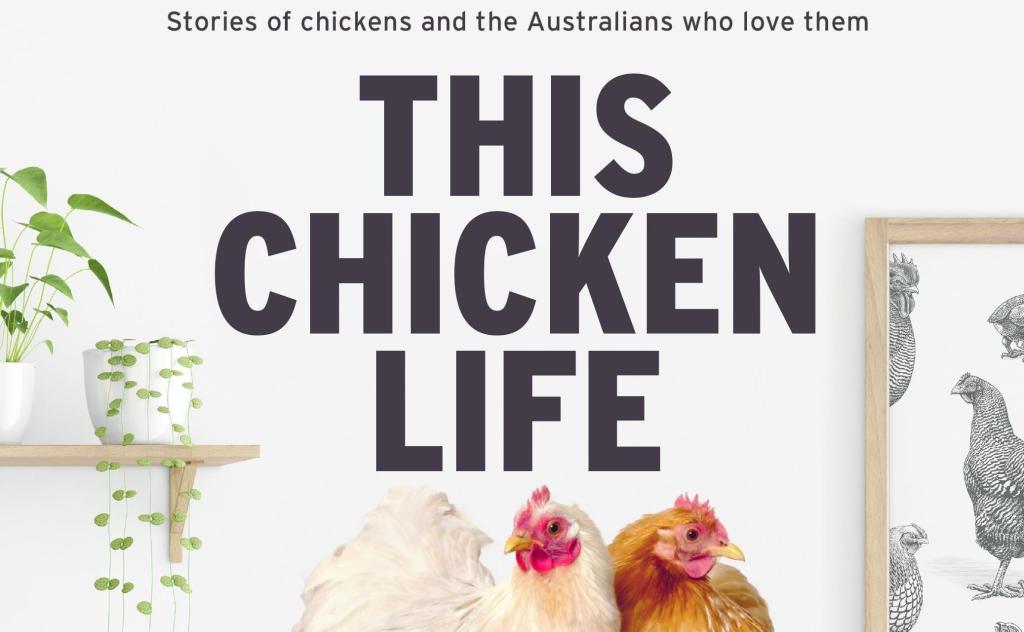 There is a surprising number of chicken enthusiasts who appear to have eagerly contributed their personal stories to This Chicken Life. They include a member of parliament, a comedian, a pre-teen girl with autism, a 92-year-old man, a horticulturalist, an advertising director, a social worker and the list goes on. How and why these people came to fall passionately in love with chickens is recounted with frank enthusiasm. In fact, the book bubbles with gusto and while Fiona Scott-Norman’s comments tend to be a bit gushy at times they are always apt and laced with self-deprecating humour.

The photography by Ilana Rose portrays people and their chicken friends with an honest directness. The style is that of unembellished simplicity, with vibrant colours that show the chickens and their owners relaxed and happy.

At the heart of the book are the chicken enthusiasts, but there is more. Scott-Norman does not claim to be an expert on the subject of chickens but she is very knowledgeable nonetheless and gives the reader the benefit of her opinions and experiences.

In the chapter headed ‘Ms Fox’, she tells of the devastation foxes wreak on a chicken coop: ‘I had no concept of the word ‘massacre’ until a fox went through my first flock … foxes are the violent spree killers of the animal kingdom, ripping the entire flock to chunks and pieces apparently for kicks.’ She rightly blames early settlers for introducing foxes to Australia so they could enjoy hunting.

Of the pecking order of chickens Scott-Norman says:

‘A lot of chicken owners . . . find watching the pecking order in action distressing. It can be. It’s business as usual for chickens but looks an awful lot like bullying from where we stand, featuring lashes of exclusion backed up by forceful pecking . . . it can be ugly, violent and disconcerting.’

She goes on to explain how the pecking order works and why it exists as a survival mechanism.

‘Mr Fabulous’ is the title of the chapter given to roosters, referred to as ‘the poor magnificent bastards’. Scott-Norman describes the work being undertaken to detect ‘male’ eggs before incubation to avoid the current cruel methods of killing unwanted male hatchlings. That research will result in ‘a win of sorts for roosters, which have truly not enjoyed many benefits from late-stage capitalism.’ One of her father’s roosters, Scott-Norman says, attacked her father once too often and ended up on the Sunday dinner table. Apparently some people can love them and eat them. But at their best, roosters are magnificent birds and there are many stories of roosters who have defended their flocks to the death against predators.

In the brief chapter on the history of chickens in Australia, we learn that 87 of them arrived with the First Fleet in 1788. In 2016, about 650 million chickens were produced for meat in Australia. The history does not mention current Australian egg production which exceeds six billion annually.

There can be no debate about the importance of chickens. But that is not what motivates the chicken lovers featured in This Chicken Life – rather, it is the personalities of the chickens and their beauty and diversity.

While the chapters in this book about foxes, pecking orders and roosters describe a dark side to chicken-tending, this is a feel-good book. Goodness knows such books are very welcome at this time with the bleak cloud of the coronavirus hanging over our heads. This book weighs in at 1kg so it is a bit heavy for reading in bed, but ideal for picking up from the coffee table and for browsing.