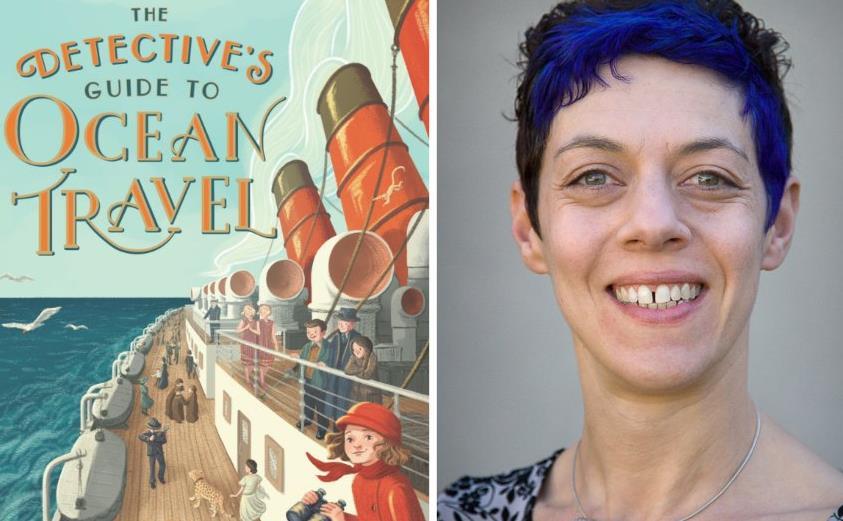 With The Detective’s Guide to Ocean Travel, Nicki Greenberg has produced an exciting page-turner of a novel aimed at readers from around age eight and upwards. The hero is Pepper, the teenage daughter of the widowed captain of the famous cruise liner Aquitania. Impetuous, gifted, brimming with energy and cheeky as they come, Pepper is someone most young readers could readily identify with.

Pepper and her friends are on board the Aquitania en route to New York. The novel is set in the 1920s when luxury cruising was at its most popular. While all the characters owe their existence to Greenberg’s fertile imagination, the RMS Aquitania  was a real ship. One of the most spectacular of the transatlantic liners, it was nicknamed ‘The Ship Beautiful’.

The First Class restaurant was an enormous room two decks high, with a mezzanine balcony running around all four sides. Slender marble pillars soared from the balcony to the ceiling, whose centrepiece was an immense oval fresco of cherubs cavorting among sunset-flushed clouds.

During the voyage, a priceless, world-famous diamond is stolen and Pepper sets out to discover the thief with the help of her friends, leading to many exciting episodes, false trails and dangerous encounters. Along the way, Pepper has to cope with the displeasure of her father, the sea-sickness of her governess, a mischievous monkey and a pet leopard.

Some children’s books also appeal to older readers, from JK Rowling’s Harry Potter series to CS Lewis’s The Chronicles of Nania and Dodie Smith’s The Hundred and One Dalmatians. These books all share a depth of characterisation and a sense of reality that grounds the more fantastical elements. Greenberg, however, has chosen to ignore the older reader and present her younger readers with an almost childlike view of the meaningful adults in Pepper’s life: Pepper’s father is a simple gruff old captain with unexplained anti-social tendencies and her governess, Miss Quacken, comes across more as a caricature than a real person, although she provides one of the most amusing highlights of the novel when she quotes from The Lady’s Guide to Ocean Travel:

‘Accidents and loss of life are possible at sea, and I have always felt that a body washed ashore clad in good      clothes would receive more respect and kinder care than if dressed in those fit only for the rag bag.’

A good detective story needs a bevy of plausible suspects and an unexpected yet convincing solution. Greenberg’s novel contains all these ingredients and a charming end with an extra twist or two. Affirm Press say they love books that ‘influence by delight’; in publishing The Detective’s Guide to Ocean Travel they have once again succeeded in this goal.