Imagine if Love Actually were actually good, and you might have Nakkiah Lui’s whip-smart, hilarious Christmas comedy.
Jinghua Qian 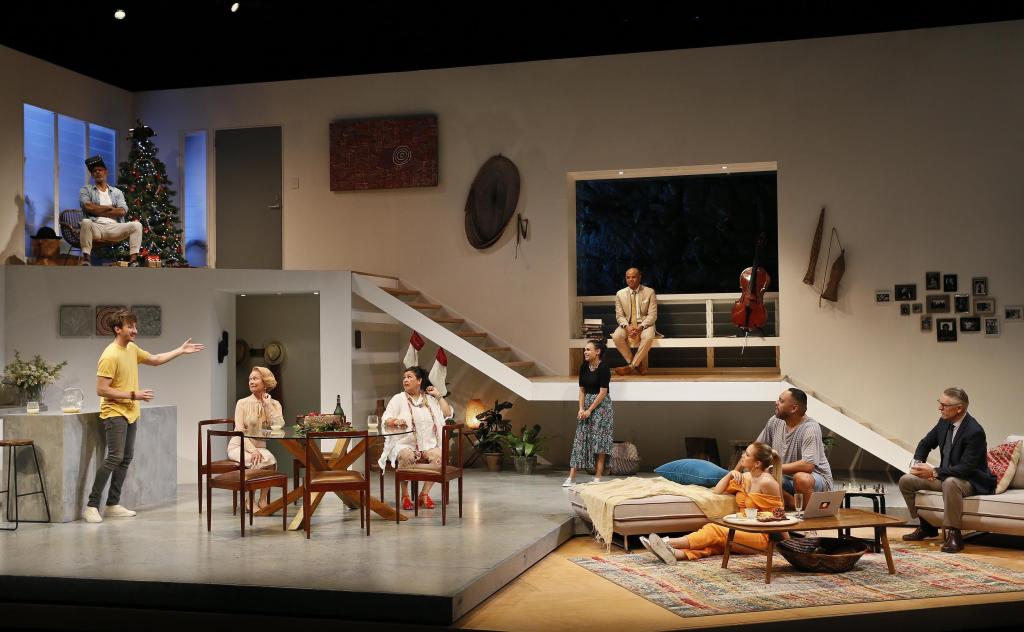 Nakkiah Lui’s Black Is The New White is easily the best thing I’ve seen all year. The whip-smart script, elegant staging and glorious cast come together in a Christmas comedy that’s very much a story of our times – yet also dripping with timeless charm.

Start with the stylish split-level set by designer Renée Mulder: a beautiful open-plan kitchen and lounge decorated with lush plants, mid-century-modern furniture, Aboriginal art and family photos, this is the holiday home of the Gibsons, a well-off Aboriginal family.

Daughter Charlotte (Miranda Tapsell), a high-profile lawyer, wonders if her family’s affluence alienates her from her community – what right does she have to represent Aboriginal people when her own life is so cushy? On top of this ethical and existential quandary, she has to deal with introducing her fiancé, Francis (Tom Stokes), to her family over Christmas. He’s white. He’s unemployed. He’s an experimental composer. And his father is the archnemesis of Charlotte’s dad, Ray.

It’s a pretty classic sitcom set-up and it works. Every joke lands, and each member of the ensemble cast is delightful. Tapsell is endearing as the somewhat over-earnest protagonist while Stokes nails the art of cringe with his character’s propensity for seriously off-tap jokes. Lui’s rapid-fire dialogue shifts seamlessly from thoughtful cultural commentary to dorky puns, with each line helping to build the rich relationships between the characters.

In a cast of nine, it’s remarkable that each character feels so multi-layered. Tony Briggs shines as the problematic patriarch, Ray, who clearly loves his family but also consistently underestimates his wife, Joan, who is played with warmth and dignity by Melodie Reynolds-Diarra. There’s beauty in the specifics of their history as young firebrands turned bougie Boomers, but also a sense of broad familiarity in the gender dynamic: the weary woman running the household while her childish, curmudgeonly husband gets into Twitter arguments. Vanessa Downing and Geoff Morrell are likewise superb as Francis’ parents, bringing to mind every WASP-y Toorak power couple you’ve ever seen in Australian politics but far, far funnier.

The well-crafted combination of duo and ensemble scenes gives each character room to breathe while also keeping a dynamic pace. Tuuli Narkle is magnificent as Charlotte’s glamorous and confident sister, Rose, and a scene in which she and Charlotte discuss politics over a joint shows different approaches to Aboriginal culture, community and responsibility while also fleshing out their sibling dynamic. It’s also riotously funny as the sisters reminisce about their past sexual exploits, then worry – in their paranoid high haze – whether they’re actually talking to their dad. The punchy dialogue is peppered with physical humour, and the cast make great use of the multi-level set.

Light-hearted yet at times hard-hitting, Black Is The New White is set to be a Christmas classic on the level of Mariah Carey. Imagine if Love Actually were actually good, instead of a misogynistic mess – and not only funny and well-made but also a clever skewering of Australian politics, middle-class guilt (whether black or white), generational conflict, marriage, and race relations. It’s irreverent, resonant, and you will laugh until your face hurts.