Marking the 100th anniversary of the start of the Great War, Black Diggers will emerge as an important theatrical landmark.
Martin Portus
[This is archived content and may not display in the originally intended format.] 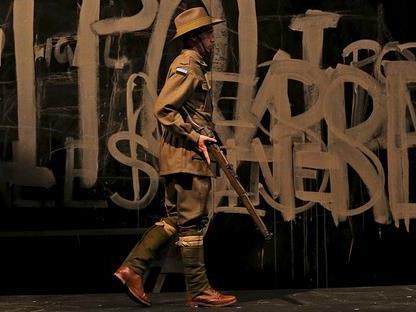 It’s exciting –  if depressingly rare – to watch an Australian stage epic unfold before you, one invested with a hefty cast, an historic sweep and something urgent to say. No wonder the Governor General, N.S.W. Governor and Premier all turned up for the opening.

True, officialdom was there because Black Diggers (2014) also marks the 100th anniversary of the start of the Great War. And in returning to familiar wartime legends, Black Diggers recasts them afresh by focusing on the some 800 indigenous soldiers who served their new nation without the rights of citizenship. It was a big night and Wesley Enoch’s show almost completely delivered.

For this Queensland Theatre Company and Sydney Festival production, Enoch and writer Tom Wright artfully weave together sixty brief vignettes which capture the moving stories of the soldiers. There is droll black humour as indigenous boys struggle in recruitment lines to prove they are at least partly ‘of European origin’, until the wartime demand for men overtakes this imperial prejudice.

Once in khaki, indigenous men earn equal pay for the first time. In the trenches, they enjoy a life-and-death mateship with their white compatriots which was not possible before the war and – as we sadly see – not possible after.

Back home, many indigenous soldiers were denied land grants available to other veterans, war pensions and back-pay, and, again, public bars were closed to them. Indeed, the condition and rights of Aboriginal people arguably regresses through the 1920s.

Wright tells this huge national story through precise, high-impact scenes, many ringing with the truth of historic personal accounts. An all-male, all-indigenous cast of nine move between ongoing characters and other temporary roles, occasionally leaving the audience confused.

Enoch’s staging is particularly impressive in the scenes of trench warfare.  Never avoiding the brutality, he relishes the comedy of the desperate and stirs fresh empathy for solders of whatever race. The action is well served by the niches and platforms of Stephen Curtis’s imposing set, its huge walls by the end whitewashed with graffiti and the names of battles and the dead.

The rascally David Page and charismatic, young Hunter Page-Lochard serve with Luke Carroll, Guy Simon, an impish Tibian Wyles and others in a strong cast.  Only sometimes do they fail to step up to the powerful personal delivery required in Wright’s fast moments of high-drama and legend.  Numerous hymns and ditties help punctuate the action.

Black Diggers avoids all the traps of black victimhood, expositional history and simplistic politics. It will emerge as an important landmark of our theatre.

Martin Portus is a Sydney-based writer, critic and media strategist. He is a former ABC Radio National arts broadcaster and TV presenter.