A smutty and delightful performance that makes other cabarets look tame.
Anna Westbrook 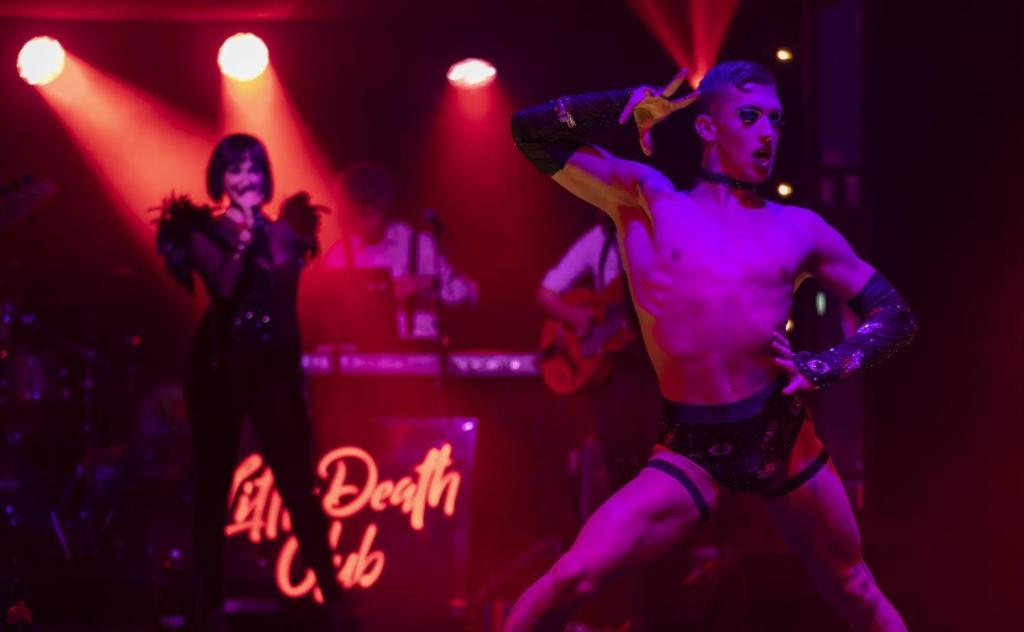 Crackling with salacious energy that is contagious and barely containable, Bernie Dieter’s Little Death Club is a raucously good time from the first moment Bernie prowls across the stage and into the audience. She is an irresistible host, brazen and vampy, cooing and snarling like Anjelica Huston in The Witches and furnished with the same campy German accent. Her effect is mesmeric, with spectators’ reserve crumbling as she enlists them in her shenanigans, at one point nearly crowd-surfing, jubilantly exclaiming ‘move it or lose it’ to folks in the way, and becoming divested of her heels on the journey (gentlemen recover them obligingly).

The Spiegeltent’s in-the-round setting is ideal for this breed of fourth-wall-breaking cabaret and Bernie grooms the electricity of the crowd, keeping it at high voltage for the procession of performers: a kiss-curled Adonis aerial acrobat in a Clockwork Orange-esque codpiece on a lyra hoop; a Las Vegas-style showgirl with a penchant for hot wax; a classic, uproarious Ocker drag queen. And Bernie’s back, flirting outrageously: ‘Was your mother a beaver? Because dam, girl!’ Her voice is spectacular, belting out a set-piece involving visual aids, synonymising certain unsolicited pictures, often received by women, with particular East African rodents (naked mole-rats). It’s smutty and delightful and slightly unhinged, as is her later, erotically instructional number.

Another acrobat, dapper in a singlet and suspenders, has the audience breathless at his core-strength during a neat balance trick replete with whiskey and cigar which takes us to interval, where the mood is effervescent and the throng around the bar a dozen deep. A 50s femme in cat-eye sunglasses energetically takes an angle-grinder to her chastity belt amongst a host of other spectacles in the second half, including a very memorable pyrotechnic fire-swallower. There’s a boisterous sing-along to The Angels’ Am I Ever Going to See Your Face Again? and its apocryphal ‘extra’ call-and-response lyrics. Bernie treats us to her oma’s traditional drinking song to wrap up the evening, channelling Joel Grey as the emcee and reinforcing the show’s embrace of weirdness, sexual liberation, and diversity; entreating the audience that ‘difference should not be something we are afraid of’.

This is an exuberant, juicy, guns-blazing performance that makes other cabarets look stale and tame. Bernie Dieter has you in the palm of her hand at all times.