Named after an astronomical term describing a star’s distance from the viewer, this work is remote but beautiful.
Richard Watts 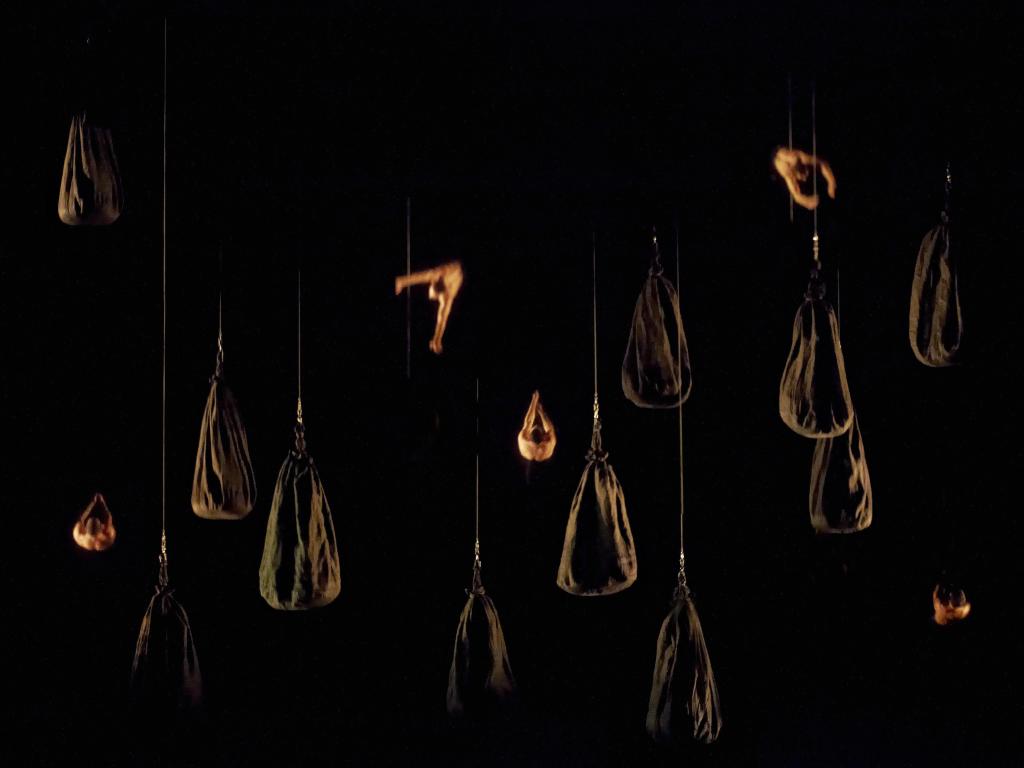 In Azimut (named after the astronomical word ‘azimuth’, which describes the angle in degrees between due north and the perpendicular projection of a star or other heavenly body down onto the horizon) contemporary French stagecraft and traditional Moroccan acrobatics blend to spectacular but sometimes distancing effect.

Indeed, such is the meditative tone of this performance – so different to the frenetic, look-at-me pace of more familiar, Western-styled contemporary circus troupes – that opening night saw several walk-outs from Adelaide’s Festival Theatre, where the work had its Australian premiere. Audience members who departed early, instead of letting themselves adjust to the work’s subtle pace and abstracted sensibilities, missed out; Azimut developed into a beautiful piece of physical theatre, rich and haunting, and ending with a moment that packed a significant emotional punch.

Created by award-winning French director Aurélien Bory on the bodies of the members of Le Groupe acrobatique de Tanger (whom Bory first encountered training on a Tangier beach a decade ago), Azimut draws heavily on Sufi traditions in the construction of its imagery. Specifically, it references the legend of Sufi patron saint Sidi Ahmed Ou Moussa, who upon reaching heaven turned back to look upon the world and its people and decided to return to earthly life.

The resulting work – punctuated by a plaintive musical trio playing flute and hand-drum, with a seemingly pregnant woman providing the vocals – was rich with striking and remarkable images: a man crawling on hands and knees, upside down across the ‘roof’ of the stage; heavy sacks rising and falling on ropes, which in a brain-teasing moment saw sacks replaced by bodies emerging as if by magic from the darkness; men tumbling across the stage, limbs blurring; the pregnant woman giving birth one by one to a family, a tribe; bodies clambering atop one another before climbing impossibly higher; men swinging out over the audience, screaming with joy; rippling folds of cloth and shadow seemingly swallowing people whole.

A sophisticated mechanism in the form of a grid-like climbing frame played a key part in realising the work, as did the exquisite lighting design (the latter making Azimut‘s presentation in the Festival Theatre occasionally problematic – without ‘light-locks’ on the doors, people arriving late or walking out of the show caused light to spill into the auditorium from the foyer; a significant distraction); though at times only the simplest of lighting was employed – a hand-held torch – to equally dramatic effect.

If one is to fault Azimut, it is that its beautifully crafted sequences and performances lacked emotional resonance; the work was striking, but not always engaging. Only in its final moments was an emotional response engendered. Recalling the events of the Algerian War, as documented in the film The Battle for Algiers, this closing sequence saw bodies vanishing one by one – as if ‘disappeared’ by an oppressive government – before the performers resisted their fate and stood united. It was a vivid and moving end to a spectacular, but not always accessible work.