A team of unstoppable women have crafted a piece of vital, brute-force theatre.
Georgia Symons
[This is archived content and may not display in the originally intended format.] 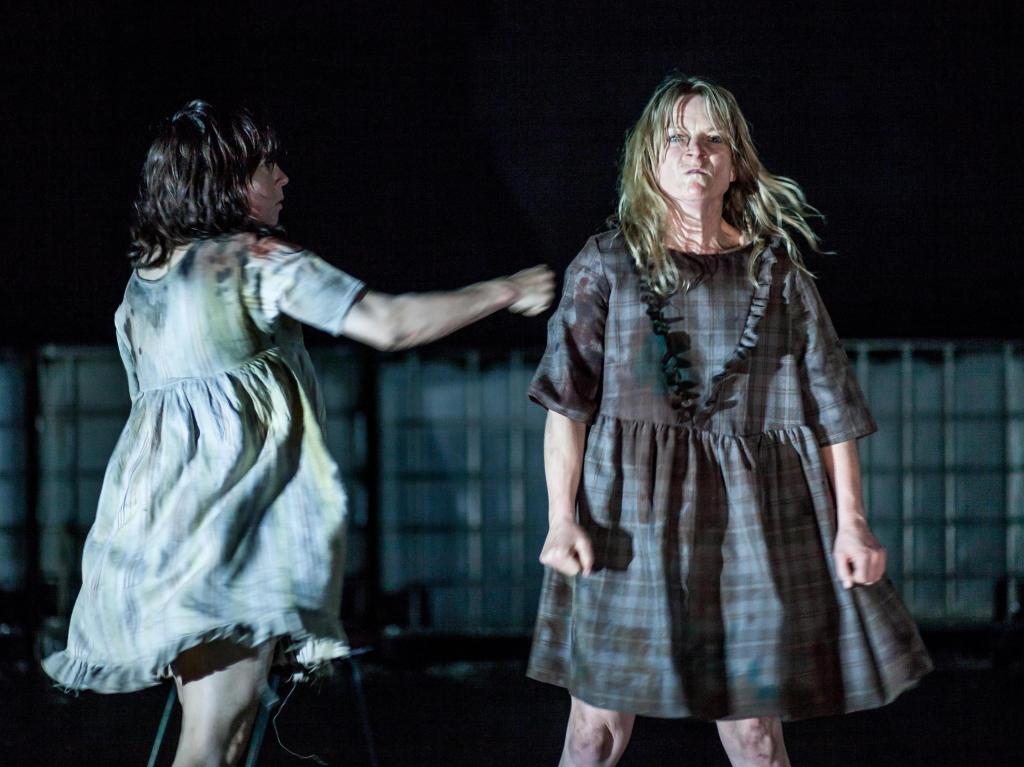 I left the theatre as soon as I could after Animal. It was opening night, there were plenty of people to talk to – there was even free food. But almost without thinking, I walked straight out of the building and into the quiet night. I didn’t want to talk about it. I wouldn’t have been able to talk about it.

We still live in a world where, as women, to surpass a certain threshold of strength is to become abject, unseemly, animal. Two such animals are Kate Sherman and Nicci Wilks, and for over an hour, we witnessed their awesome strength.

For Kate Sherman, Nicci Wilks and director Susie Dee, this has been a work seven years in the making. It’s a work that begun in response to the rife domestic violence in Australia. Although the piece is almost entirely physical, this concern is crystal clear. The two figures on stage (girls? Women? Women stuck in the roles of girls?) are plagued throughout the piece by a presence, invisible but deafeningly loud and terrifyingly precise in its stalking of the two women. I read the presence as a father. Vignettes of these two women are split up with text by Angus Cerini. The text has a liturgical flavour, or the sense of an old, uncanny nursery rhyme, and is projected into the space with visceral brute force. Around the stage are stacked caged water tanks, two or three tanks high and the space is littered with feathers.

Within this milieu, what plays out between Wilks and Sherman is extraordinary. Although physical work is not always designed to carry narrative or singular meaning, I can describe what I read. I read two women, both under the power of a cruel masculine force. From his treatment, his gaze, the women themselves are filled with a violent energy, but do not know where to place this violent energy. When they exert the violent energy upon one another, they are destined to fail, to repeat, to fall. When they exert it upon themselves, the energy only increases. In the glimmering moments when they can see to direct the energy outwards, to plan, to scheme, to fight back – there, they have a chance of getting somewhere. But nothing is guaranteed.

The dedication of these artists to their subject matter is far beyond what most artists are willing to give. These bodies are at risk more than most bodies I’ve ever seen on stage. But so too are they more defiant, strong and capable than most bodies I’ve seen on stage. And what Wilks, Sherman, Dee and their team have crafted with and around these two bodies is extraordinarily powerful. The final image filled me with fear and awe and admiration all at once.

There is so much about this show that cannot be unpicked in a 500 word review. The images are exquisitely unresolved and polysemic, and yet there are moments of intent from the performers that couldn’t be any clearer. This show is a fight; it is about asserting the private violences and forces enacted upon women’s bodies in public space, and about women asserting their own private violences and forces in public too. These performers give their bodies to the task of illuminating the literal fight for survival that is many women’s everyday existence.

There were moments where projected images seemed to distract from the presence of the women, and moments where I would have liked the music and sound to be cut back in order that we hear the bodily work being done by these two women, but these are small quibbles with what was a truly extraordinary piece of work.