And That’s Why We Can’t Have Nice Things, Civic Theatre Newcastle (NSW)

Grahame Cooper’s intellectual curiosity is paired with his white-hot sense of humour in this one-man show.
Helen Hopcroft 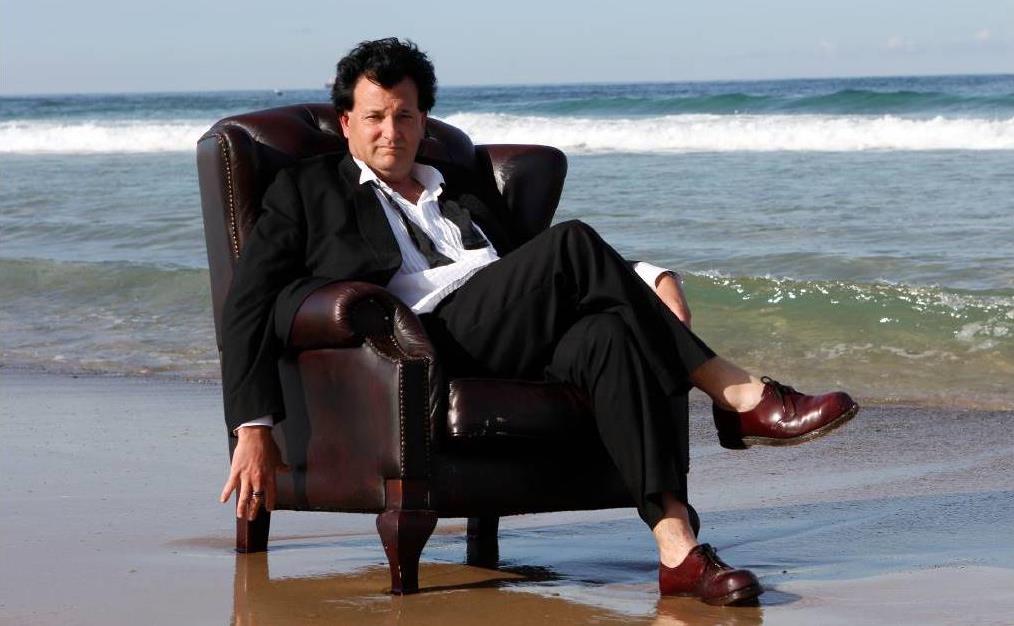 On a beach, a handsome man lounges precariously in a Chesterfield armchair. He’s wearing a tuxedo and Italian leather loafers, and waves crash around the legs of the chair. The man’s bowtie hangs loose, while in the background a large tanker waits patiently on the grey horizon. Beneath the chair, the sand is wet, and it seems only a matter of time before the man will tip into the sea, ruining his beautiful clothing.

The publicity poster for And That’s Why We Can’t Have Nice Things was the reason I went along to see Grahame Cooper’s latest performance. Billed as a ‘once-off, one-man, once-in-a-lifetime theatrical experience’, Cooper’s show ran for one night only at the Civic Playhouse in Newcastle. In the publicity material spruiking the performance, Cooper was described as the author of the ‘multi-award winning play Pyjamas in the Daytime and the cult novel Vinegar’. In 2018, Cooper wrote a four-line poem each day for 400 days, and later decided to create a show featuring this material. I wasn’t sure what to expect, but the marvellous poster was sufficient incentive.

The Playhouse is an intimate theatre that tends to showcase experimental or new work. When the lights go up, a Chesterfield armchair sits alone on an empty stage. Beside it is a small table on which rests a stack of paper and a glass of water. After being introduced, Cooper ambles onto stage, looks quizzically around at the audience – as if sizing us up – and takes a seat. He picks up a single sheet of paper, recites a short poem and then drops the paper on the floor. With some variations (some poems are ripped up or handed to audience members), this action is repeated hundreds of times. By the end of the evening, the stage floor is littered with hundreds of pieces of paper.

Cooper’s poetry is raw, funny, anarchic, idiosyncratic and original. The subject matter ranges from comic animal limericks to passionately felt pieces about social issues: he’s particularly compassionate towards refugees and the elderly. Popular music is satirised – ‘Ringo packed the bongs, Lennon wrote the songs’ – as are memorable seductions, ‘the greatest aphrodisiac the world has ever seen: a bottle of Blue Nun, fried rice and black bean’.

Scattered with the occasional literary reference – Coleridge and Walt Whitman both feature – some poems rely on clever word play, such as rhyming ‘gate’ with ‘pâté’, while others manage broad brush social criticism in rhyming verse: ‘I’m sick of this world, with all its tension, how long before I can play bowls, and starve to death on the pension?’

Everyday observations showcase Cooper’s off-the-wall humour: who picks up guide dog poo, and do dogs ever consider trying other sexual positions? Yet Cooper is probably at his funniest when mocking himself. He makes joke about being an aging trophy fuck, being told to remove a Go-Pro from his head on his wedding night, and making the mistake of choosing ‘harder’ as a safety word during a bondage session. When he occasionally punches down, the effect is jarring.

Like many experimental works, there are some structural issues. At times the frequent oscillations between light and shade feel too neat, a little contrived. If you watch the performance hoping to discover a grand narrative arc underpinning the poetic fragments, you’d be disappointed. If, however, you change your frame of reference and view it as the structural equivalent of a mosaic – postcards written from the messy material of human lives – it’s a much more satisfying conclusion. This is autobiography presented in the form of short poems, rhyming fragments of memory, pure invention and experience. The friend I was with, Megan Hills from The Creative Ingredient, accurately described it as ‘a cross between Doctor Seuss and David Mamet’.

What stands out most about this production is Cooper’s white-hot sense of humour. This ranges from easy-going jibes at audience members who arrived late after the interval – ‘we were just practising until you got back’ – to poignant material about his own mental health. There’s a deep-set restlessness at work here, a need to poke and prod, intellectual curiosity paired with uproarious humour. Like the man at the beach, poised to fall into the sea, this was a unique performance that managed to both celebrate and mourn the act of living.