A journey across cultures and down the rabbit hole.
Douglas Robins 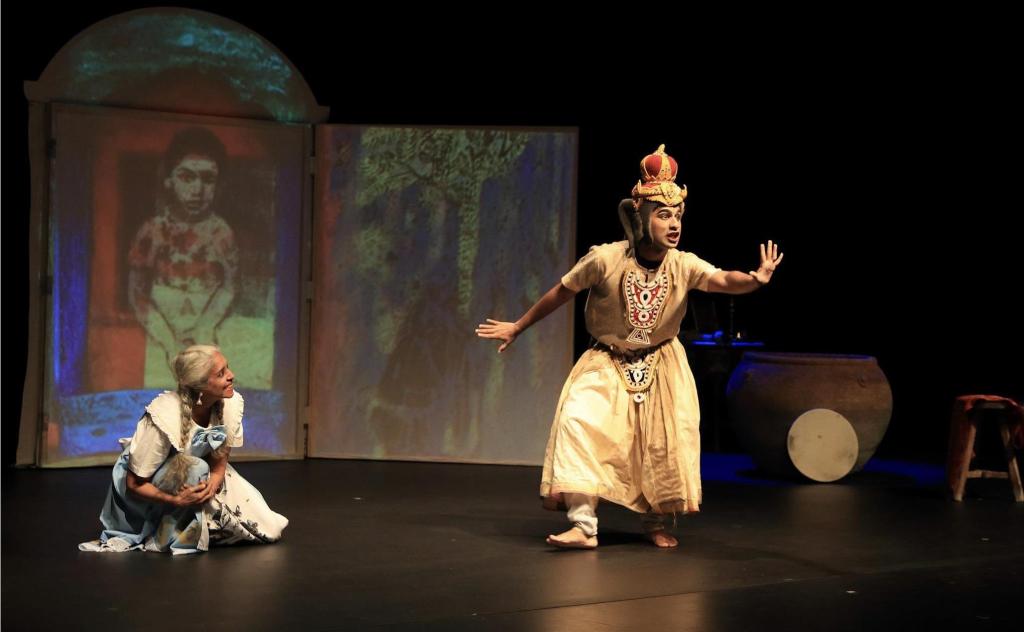 A journey of 5,569 kilometres. A journey in search of a mother’s love. A journey ‘Down Under’.

An international co-production from JUTE Theatre Company, Masakini Theatre Company & Sasi Victoire, Alice in the Antipathies by Dr Sasi Victoire is the culmination of a life colourfully lived. Primarily a visual artist, Victoire’s foray into playwriting brings a different feel to most other plays. Her vision transcends the page due to her dual role as the playwright and the production’s visual designer in charge of the costumes & props.

The storyline follows the protagonist Asha, played by Sukania Venugopal, across her formative years growing up as a second-generation Indian migrant in an ever-changing, multicultural Malaysia. It then tracks her rollercoaster journey to assimilate into the Australian way of life without completely losing her cultural identity. The dramatic intensity of this tale is juxtaposed against Asha’s risk-taking imaginary friend, the familiar Alice of Alice in Wonderland. Alice is played by Roz Pappalardo and she is a bigger part of Asha’s life than her mum would like, perhaps due to her unquenchable thirst for personal sovereignty above all else, questioning the very role that was laid out readily by her seemingly culture-bound parents. A Ganesha incarnation is played by Phraveen Arikiah, who offers a lighter side to the trials and tribulations that criss-cross the voyage of Asha.

Costumes were vibrant. Asha starts off in a blue knee-length dress with a pinafore over the top, as made iconic by the illustrations from Alice in Wonderland. A matching apron links her to her imaginary counterpart, Alice. The mother character (or the Red Queen) played by Sabera Shaik, is effortlessly draped in a traditional red sari with gold trim. Ganesha wears an inspired outfit and even those audience members with a limited knowledge of Hindu mythology will recognise the elephant trunk and crown.

The set designers, Simona Cosentini & Simone Tesorieri, created a minimalist stage design setup which skilfully allowed for the characters and their dialogue to be front and centre – a table, representing her childhood kitchen, a bed, a shrine, large ceramic pot and central screen installation, which is utilised for projections of artwork. The projections, however, didn’t quite depict the true depth of the actual inspirational art pieces.

The opening musical number with the chorus lyrics of Child of Mine was risky, yet with risk can come great reward. Kudos to sound designer Tristen Barton.

There is a liberal smattering of Alice in Wonderland references throughout, adding to the overall aesthetic of the piece. By unfairly calling her mum the Red Queen the temptation is too great to not have her tout her catchphrase, ‘Off with her head!’

There is a touching gem in the penultimate scene that will clench hearts and complete the circle.

So why not follow Alice on a trip down the rabbit hole? It is well worth the journey.