A Flea in Her Ear

Gloriously funny and farcical experience and you can’t help but be swept up in the light-hearted chaos.
Ros Brennan
[This is archived content and may not display in the originally intended format.] 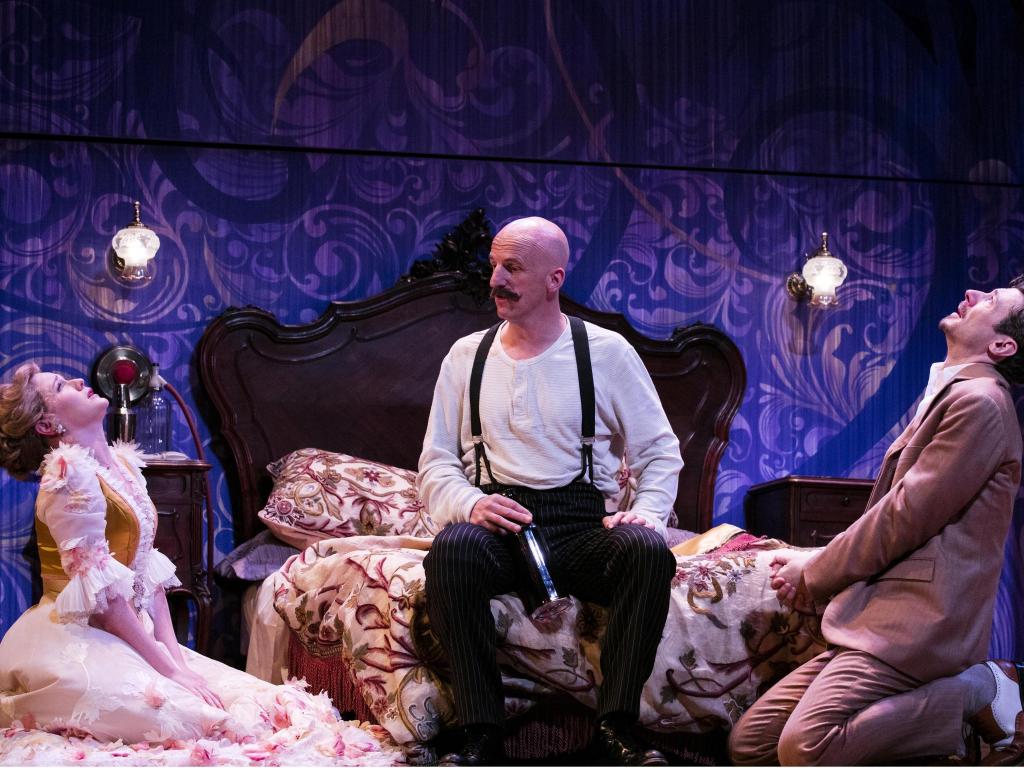 Harriet Dyer, David Woods and Tim Walter in Sydney Theatre Company’s A Flea in Her Ear. Photograph by Brett Boardman.

When you spot heavyweights John Bell and Hugo Weaving having a hearty chin wag in the Opera House foyer before taking their seats, you know you are in for a treat, and A Flea in Her Ear did not disappoint.

This raucous adaption by producer Andrew Upton and director by Simon Phillips amps up the slapstick comedy and adds a dash of Australian vernacular for good measure. The audience eats it up; barely a minute goes by without an eruption of shrieking laughter and all eyes are glued to the stage to keep up with the frenetic volley of venomous jibes and hilarious pratfalls.

Written by Georges Feydeau, one of the great French playwrights of the 20th Century, A Flea in Her Ear is an effervescent comedy of errors set in 1907 in Paris, following the pampered lives of and marital mishaps of Raymonde Chandebise and Victor Emmanuel and their well-to-do circle of friends.

Gabriela Tylsesova’s twinkling gold Art Noveau-inspired set draws you into the world of this aristocratic French family, basking in all the trimmings of the Belle Époque extravagance. The lavish turn-of-the-century costumes which sweep the stage only reinforce this image of a well-bred set of society we are about to get to know in the ensuing two and a half hours on stage.

The drama unfolds when Raymonde Chandebise begins to doubt the fidelity of her husband, Victor Emmanuel. She confides her doubts to her old convent-school mate Lucienne, who suggests a trick to test him. They set about a devilish plan to call out his philandering ways; writing him a letter from a fictitious admirer, requesting a rendezvous at the Snatch Time Hotel in Montmartre (adapted from Frisky Puss Hotel in the original script), where they will catch him red-handed.

When Victor Emmanuel receives the letter, however, he has no interest in such an affair and believes the invitation from the mysterious woman was meant for his best friend Tournel, a handsome bachelor. Unknown to Victor Emmanuel, Tournel has his eye on Raymonde and eagerly exits to make the coital appointment.

Lucienne and Chandebise’s plan goes spectacularly wrong in a dizzying melee of mistaken identity, amplified by the introduction of the Snatch Time porter, who, to much confusion, is the spitting image of her husband, followed by the arrival of her actual husband, the randy family physician Dr Finache and Chandebise’s speech impaired nephew Camille.

In a bid to avoid running into Victor Emmanuel and Dr Finache, Tournel and Chandebise set off on a wild goose chase through the various boudoirs of Snatch Time, including the bed of a weed-smoking hippie who seems nonplussed by the whole affair, including when Tournel mistakenly kisses him instead of Chandebise.

Upton and Phillips achieved a true feat of slapstick comedy; the set spinning and rotating, revealing new locations, characters changing costumes and reappearing to create havoc at a frenetic pace.

The cast was for the most part formidable, with some convincing and comically adept performances from Camille, the Dr Finache and Chandebeise.

Some of the elements of slapstick were not quite there; there were moments of actors appealing too hard for laughs rather than really embodying their characters and the fight scenes weren’t as pin sharp as they could’ve been.

For the most part, A Flea in her Ear is a gloriously funny and farcical experience and you can’t help but be swept up in the light-hearted chaos. A glance around the auditorium revealed that starry-eyed trance that can only be stimulated by a rousing performance.

A Flea in Her Ear

Ros Brennan is a freelance arts writer, marketer and publicist based in Sydney. For the past eight years, Ros has worked in arts marketing in various guises, including Sydney's National Art School, the 56th Venice Biennale of Art, Artsource in Western Australia and the Perth International Arts Festival. A Young Ambassador of the Museum of Contemporary Art Australia and a self-confessed culture buff, Ros regularly attends exhibitions, theatre, film and dance and believes the arts are intrinsic to a city’s cultural vitality. Her writing features in various publications, most recently as the Art Insider for Buro 247 and Art Reviewer for ArtsHub.