What’s in a name?

With the announcement of the loss of the word ‘arts’ from the new super department many are concerned, but Justin Murphy argues that we shouldn’t read too much into the name change and look for opportunities.
Justin Murphy 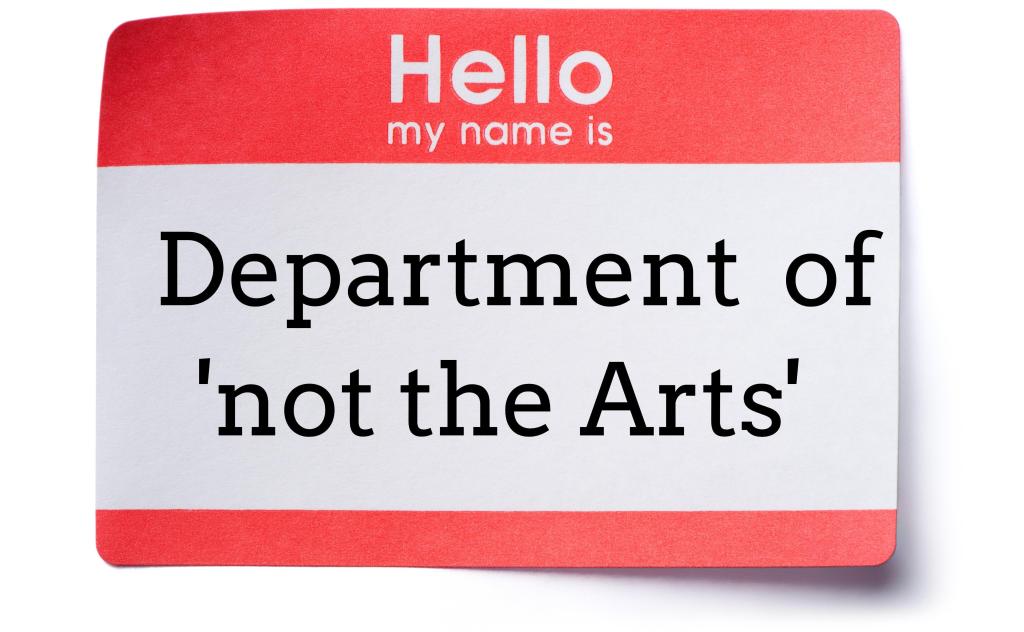 Does the loss of ‘the Arts’ mean we lose as much as we think? Image Shutterstock.

A lot has been said and written following Prime Minister Scott Morrison’s announcement of Administrative Arrangements Orders that consolidate the number of Commonwealth Government departments from 18 down to 14.

Examining what has actually been announced and studying the history of the mechanics of government, it becomes clear that the arguments don’t really seem to stack up. Perhaps, rather than following the fight or flight response, let’s take a breath and a good look around. It can be observed that the sky is not falling, and in fact the horizon may have just opened up.

The arts still at the heart of government

History shows at Commonwealth level, the Arts has always been a ministry practically held alongside other portfolio areas.A Cabinet-level minister is a peak decision maker in a Westminster-style parliamentary democracy – and the cabinet can properly be characterised as the heart of government.

The term ‘the Arts’ first appeared in a Ministerial title in the McMahon government of 1971. Apart from the fortnight of the duumvirate it disappeared in the Whitlam years, and occasionally appeared as an assistant ministerial role in the Fraser years.

It re-emerged in 1984 with the second Hawke Ministry where Barry Cohen was the Minister for Arts, Heritage and the Environment. During the third Hawke Ministry the role passed to Graham Richardson and in 1988 become part of a Cabinet portfolio, where it has largely remained in combination with other portfolio areas.

In announcing the changes the Prime Minister was unequivocal that despite the change in the number of departments and their titles; there would be no changes to Ministerial portfolios, as he was happy with the current arrangements regarding the Ministry following the election.

Paul Fletcher is and will remain Minister for Communications, Cyber Safety and the Arts, a Cabinet-level position. At both face value and with application of history it cannot be properly said that the arts will no longer be represented at the heart of government; in fact the status quo holds.

The assertion has been made that since the emergence of cultural policy at a Commonwealth level that there has always been a department title which included ‘the Arts’. This is slightly more challenging to measure, but fundamentally incorrect. Proven through a study of previous Administrative Arrangements Orders – instruments which define government departments, their general areas of responsibility, and the legislation which they administer.

Taking the emergence of a minister for – among other portfolio responsibilities – the Arts as a jumping off point.

Departmental responsibility moved through the departments of: Vice-President of the Executive Council under McMahon; Prime Minister and Cabinet under Whitlam and Fraser; and Home Affairs and the Environment in the first Hawke Ministry.

The Department of the Arts, Heritage and Environment emerged in 1984. From there a pattern has become whilst the Labor is in power, the Arts tend to be partnered with Environment, Heritage, Sport, Tourism, Regional Australia and Local Government, and under the Liberal-National Coalition largely with Communications and Information Technology

It may surprise people to recall in 2013 at the advent of the Abbott Government that the Arts disappeared from departmental titles, to re-emerge and be paired again with Communications when Malcom Turnbull assumed the Prime Ministership.

The Cabinet currently comprises 23 individuals, there are a further 7 members in the outer ministry, yet there are only 18 government departments. At present, not every portfolio is represented by a department with the same title. It follows then that a specified Ministerial portfolio absent from a departmental title does not indicate a lack of interest on the part of government; it may suggest the opposite.

A driver of future economic prosperity

The Arts, and wider cultural sector have bounced around ministries and government departments. This could be attributed to the fact that they do not sit clearly or comfortably within the heads of power conferred on the Commonwealth Government in the Constitution. It makes a political question of where responsibility lies between the States and the Commonwealth; and an issue for all levels of Australian government.

The Prime Minister expressed that the new Department of Infrastructure, Transport, Regional Development and Communications will be ‘very economic focused’ where macroeconomic reform forms a key ambition of his government. A viable subtext is that creative thinking, innovation, problem solving, and connection between urban, regional and remote parts of the country will form a key economic driver. These are all features of every organisation in the cultural sector at present, and likely to emerge in future.

From this it can be suggested the Prime Minister signalled that at a national level that the arts and cultural sector are a key element to drive Australia’s future economic prosperity. Viewed alongside other recent announcements regarding changes to the Major Performing Arts Framework, the Commonwealth Government will largely concern itself with cultural output at the larger end of the scale. Nurturing small to medium organisations and individual practitioners will largely fall to State and Territory governments, who are hopefully able to meet this challenge.

Perceived loss of status is always going to bruise the ego; it seems that this has driven much of the initial response to the Prime Minister’s announcement. Taking a step back and looking at the wider horizon, the Arts still form part of a Cabinet portfolio – beyond the departmental secretary there is no further loss of jobs, or reduction in government investment. The bureaucratic machinery of arts policy is now housed within a department responsible for economic development in a government motivated by macroeconomic reform.

Rather than a cause for outrage or despair, this is cause for hope and optimism. It is recognition that without the resourcefulness and creativity that drives the arts and wider cultural sector, the prospect of economic development as a nation is diminished. Finally the arts and cultural sector are recognised as an intrinsic part of our nation’s success. It is now for the sector to demonstrate that this faith is not misplaced.

Justin Murphy is an arts executive and board member, having begun his career as a stage manager and lighting designer. He holds a Master of Arts and Entertainment Management from Deakin University where he is currently a candidate studying a Juris Doctor.