Women critics loved Griffith's Antigone. Men hated it. Translating their different reactions reveals the gendered politics of critique.
Jane Griffiths
[This is archived content and may not display in the originally intended format.] 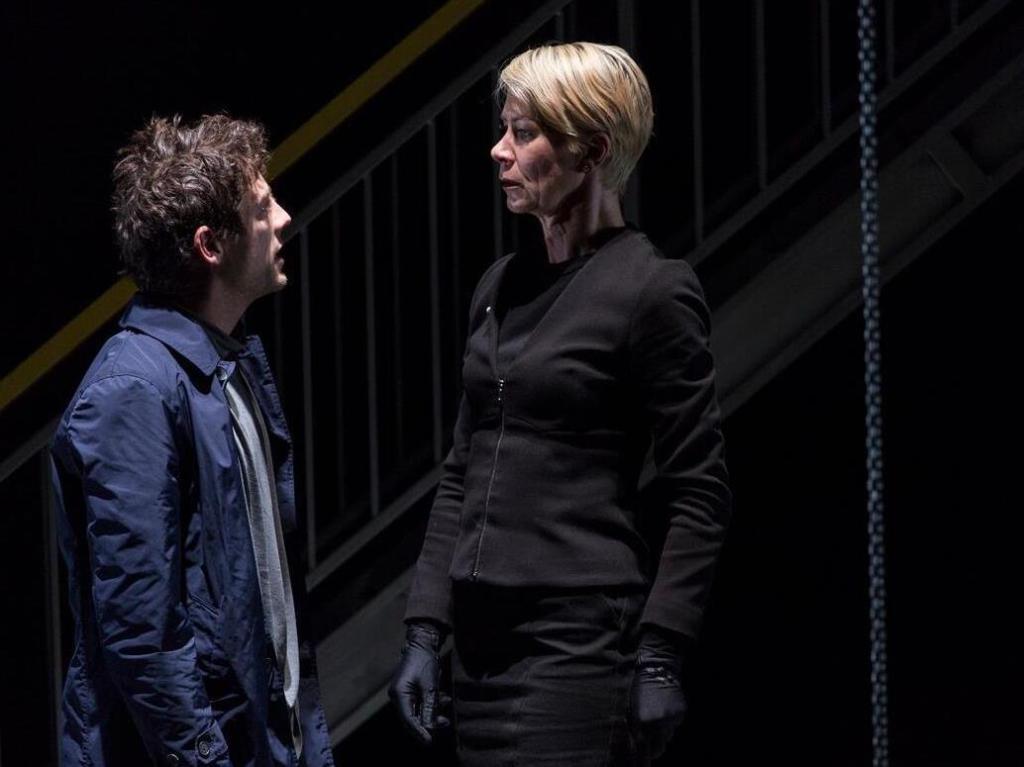 Women are good at translation. We are culturally programmed for it. We learn early on to translate the world we inhabit: to adapt the stories that permeate our culture to have meaning for us; to adapt our own stories to be amenable to the male ears that might be listening; to adapt our bodies, our voices, our words, our thoughts to make them acceptable.  We translate to find our own stories in a male narrative, and our own vision in a world framed by a male lens.

From childhood, we develop this skill.  I see it already in my daughters. At nine, my daughter is quite adept at translating the stories she reads in books or sees in films about heroic boys and ‘derring-do’. She looks for the female superheroes, but waits in vain, so instead, she de-genders her heroes and writes her own narrative.

And as she grows older, her ability to do this will become increasingly proficient. As she meets the Western literary canon, she’ll learn to read between the lines and find her own subversions. She’ll be aware of the grand male narrative, but she’ll place beside it a parallel reading. Her reading of the world will be made up of intertextualities that weave together time and place and male and female, alienation and identification. She’ll learn that interpretation is more a lava lamp than a ladder, that translation is more an oscillation than a direct line.  Because that’s what all women who want to find meaning in the works of Homer or Sophocles or Shakespeare must do.

Of course, this type of translation is not a linear search for linguistic equivalence. It does not prioritise a seeming originary text. It does not see a clear progression from source to target. It does not even consider fidelity to the source important – because that source invariably negates the female experience. It is a lateral, rhizomatic form of translation that gives a resigned shrug and weary sigh to the traditionalists’ frequently, and tediously, trotted out axiom, traduttore traditore (translator, traitor), and carries on regardless with its own meaning creation and quiet works of subversion.

This is currently in my mind because I have just been both a translator and adaptor of the recent Antigone at Melbourne’s Malthouse Theatre, and the extraordinary division in gender in the critical response prompts me to analyse the assumptions, misinformation, and downright sexism out there in the critical cultural conversation. Now as a performer, I am used to mixed reviews. I’ve built resilience to it over the years. My Goneril was unfavourably compared to a frumpy drama lecturer (not much imagination in that one, given my Monash day-job); my one-woman play about Sappho was castigated for not having enough male voices in it; my play about the female philosopher Hypatia ­- whom the Church excised from history – was flayed for not including the stories of Christian fathers. I’ve variously been lambasted for being unlikeable because I was playing a lesbian in an adaptation of a Dorothy Porter novel; for making a critic uncomfortable because I was playing a multi-breasted naked screaming baby; and for confusing a critic by playing a topless, androgynous Tin Man. Looking back on all that, there does seem to be some consistency in those criticism. All written by men, all by men who didn’t like the fact I didn’t write the story they wanted to see, or act the way they thought a woman should be. All written by men who would not engage with the world I was ‘narrativising’. In other words, written by male critics who cannot or will not make the act of translation most women have spent their lives perfecting.

Most of those criticisms, I have been able to dismiss – and beside, we all know it’s not polite to respond to critics. The specifically gendered response to Antigone does, however, deserve consideration.

Of the ten reviews (excluding private blogs), four by men are uniformly bad – one and a half to two star demolitions of the production. Four by women (including ArtsHub’s) are uniformly positive – detailed responses to the work that, even with reservations, find value in the work. Then there is one equivocal but generally positive review by a man, and one very unequivocal hammering of the show by a woman. I’ll come back to the last two reviewers in a bit

This pointed gender divide is worth some examination. The four negative reviews written by young men all have similar traits. Each engages in outrage that the source text is not being honoured; each psychoanalyses my motivations and decides (incorrectly, as it turns out) I have a slavish adoration of the protagonist; each lays down dogmatic dicta of what Greek tragedy should be, and of my failure to observe Sophoclean dramaturgy; each complains of two dimensional characterisation; each complains about my writing style; and, a little bizarrely, each turns praise of my performance into a criticism that I am too good – my strength as a performer is ‘farcically good’ and ‘breeds a special kind of resentment’.  The formula is simple: make a sweeping statement about the essential nature of Greek tragedy, demonstrate intellectual superiority by throwing in a quote from Hegel, or a misused bit of Greek, or a suggestion that the reviewer knows more about Greek metre than I do, and undermine any suggestion that I might just have known what I was doing by accusing me of hubris or egotism.

The problem with this approach to reviewing is that it fails to participate in the act of engagement – intellectual and visceral – that should be the starting point for any analysis and critique.  The issue is not that these critics did not like the production, or were critical of my adaptation. That is the critic’s absolute right and I value informed, intelligent critique. The issue is that these critics demonstrate such entrenched preconceptions, such outrage that I should dare to have taken on the task of this adaptation and, even worse, performed in it, that the critique is less about the production than about my temerity and ‘limitations’, and less about the production before them, than the never-extant play of their imagination. No openness to interrogate how adaptation and translation creates meaning, no willingness to reconsider assumptions of the genre, or indeed how the meaning of gender performativity has altered over 2500 years, no curiosity to analyse the whys and wherefores of an alternative interpretation. There is the absolute assumption that these critics know what is right, and that theirs is the only ‘reading’ of Antigone that can be right.

This arrogance and bigotry galls me, because, as all those male critics also picked up – but more by way of criticism than context – I am, as well as an actor and writer, a Classicist. Unlike most adapters of Greek tragedy in the recent past, I speak ancient Greek. I’ve studied it or over thirty years; I’ve written a PhD on Sophocles and performance theory; I’ve been a fellow in Greek Drama; I’ve been an ARC fellow in Classical reception. I’m also pretty well up on all the critical interpretations of this play, from dialecticism, through to psychoanalysis and queer theory. The critics’ knowledge of this has, far from giving me any credibility, lain me open to dispiritingly obvious criticism that my text must therefore be a ‘limp’, ‘cold’, ‘turgid’, ‘grandiose’ ‘academic exercise’, rather than a piece of informed living theatre. It has not opened the door even to the vaguest possibility that my knowledge might just mean I know what I’m doing, might just mean my interpretation is worthy of engagement. And this saddens me.

These critics’ blinkered self-assurance has the intellectual sophistication of the third year undergrad who once complained we shouldn’t be debating ‘What is art?’ because we had a lecture on it in the first year. One would hope, given the frequency with which they litter their reviews with their intellectual credentials, they’d know better.

The situation is very different with the female reviewers. In these reviews, from short form paragraphs to a long comparative analysis, these women have sought to engage with what was before them. They have looked to understand the aesthetic being interrogated, the contextual history being subverted, and, interestingly, have had none of the issues with two-dimensionality of character that so troubled the young men. Perhaps that is because women are better at translation. Perhaps because they are more used to nuanced readings, are more open to interpretation, and have more experience in the subtleties of grief and manipulation. Perhaps they see through a different lens, and realise that a character can speak empty rhetoric while being tormented inside. Perhaps they understand that what is felt through affect, and imagined through subtext, and seen through corporeality can have just as much meaning as what is seemingly explicit in text.

I would never be so generalist as to say this intellectual openness is a female universal. The one resoundingly negative female reviewer complained in ways very similar to the male critics’ about the production. Her only extra points were telling: that creating a female Creon made the play political and not about gender, and that it depicted a woman in power being unpleasant to another woman. So clearly, it is quite possible for a female critic to have just as distorted a view of Greek theatre and just as little understanding of feminism as any young male critic.  Why are those issues so bothersome to her, though? Presumably because it upsets the apple-cart of how women ‘should be’ represented. We have to be emotional; we should be nurturing; we should be more interested in the personal than the political.

The main theme, however, of the new female aesthetic being explored by contemporary feminist theatre makers is our ability and right to address difficult political issues through women’s experience – warts and all. To put ‘difficult’ women on stage, without translation. To address dilemmas without adaptation for the male lens. We need to get to a stage in our theatre when a woman can be allowed to tell her own story, without translation – in all its complexity, and grotesqueness, and ugliness, and non-conformity, and sometimes conformity, and sometimes subversion. Not as a feminist statement. But just ‘coz. Because we are women theatre makers and this is how we see the world, and our view is just as valid as the culturally predominant male lens we’ve spent so much time translating.

The gendered critical divide in the response to Antigone points to a distinct difference in critical ways of seeing.  I hear anecdotally the Antigone reviews are currently being used in a journalism course as a test case in how to write theatrical criticism.  Apparently they’ve all been de-identified and the students have been asked to guess the gender of the critics. The exercise was unsurprisingly easy for them. The interesting thing now will be to see how good at translation the next generation of critics are willing to be.

Jane Griffiths is an actor, writer, and Director of the Centre for Theatre and Performance at Monash University