A tribute to the contemporary realist, Patrick Carroll, who died tragically in a Central Coast fire.
Rachel Carroll 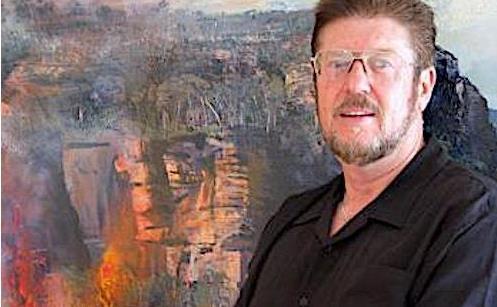 Prominent Central Coast artist Patrick Carroll’s life was cut short recently in a tragic fire that consumed the Ebbtide Mall at The Entrance (NSW). Carroll had been working in his studio, which was on the upper level of the centre, when the fire broke out in the late afternoon of Sunday, 20 October. Tragically he had called emergency services but they were unable to reach him. He was 69.

His daughter Rachel Carroll, also an artist, has written this dedication:

Patrick Carroll (1949 – 2019) described himself as a Contemporary Realist. He worked mainly in oil, acrylic and watercolour on canvas and paper. The search for new and challenging subject matter permitted him to travel extensively throughout Australia and overseas.

‘Painting is a process that I find both painful and rewarding. Each new work presents me with a ‘minefield’ of problems to solve as I try (in vain) to force my vision onto a painting that appears to have a life of its own,’ said Carroll.

‘The best a painter can hope to achieve is to show the ordinary in an extraordinary manner. If successful, one has survived mood swings ranging from exhilaration to despair as one makes the inevitable compromise in order to begin afresh in the ongoing search for the ‘elusive masterpiece,’ he continued.

After studying part-time at Bathurst Technical College from 1960 to 1963, he moved to Sydney in 1968 where he studied part-time with Roma Lewington, Henry Hanke and Alan Hansen from 1970 to 1974.

Patrick Carroll with his work at Wagner Gallery. Image supplied.

Since then, he has exhibited regularly; his most recent exhibitions were a solo titled Entropy at Gosford Regional Gallery in 2017 and Two Visions, a joint exhibition with his daughter Rachel Carroll at Artarmon Galleries in 2018.

A member of the Australian Watercolour Institute since 1984, Carroll became a member and the president of the Peninsula Art Society in 1981.

His work is currently on display at Manly Art Gallery & Museum as part of the current exhibition Home Affairs.

Rachel Carroll is a Sydney based artist who has been painting for over 20 years. She explores themes in her art work that have an environmental significance.