NGA not so cutting edge with Filipino art

The NGA wants to push contemporary dialogues but it is late to the party with its focus on Filipino art.
Gina Fairley
[This is archived content and may not display in the originally intended format.] 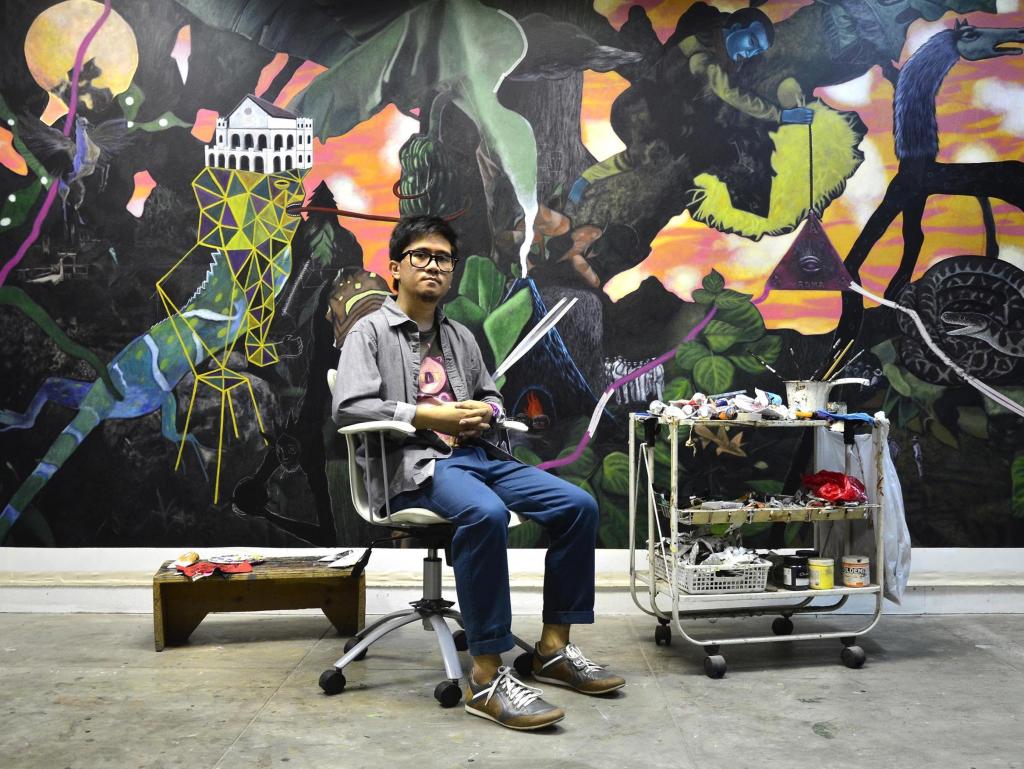 A 10-metre painting is hardly a subtle acquisition for a gallery and makes a very strong comment of intention. The National Gallery of Australia (NGA) is in the process of signing off on an enormous triptych by Filipino artist Rodel Tapaya. The painting, which explores creation myths and Moro-Isolan (Muslim) folklore, is the jewel in a current exhibition of Tapaya’s work.

Tapaya is the second is a new series of projects under the gallery’s recently formed Department of Global Contemporary Practice, an initiative designed to push the NGA’s contemporary focus. It follows Ramesh Mario Nithiyendran’s Mud Men (August 2016 – January 2017), a strong exhibition of five large-scale ceramic sculptures that questioned the face of ceramics today, forcing it out of decorative arts into the contemporary space.

It is far less certain that this commission of Filipino paintings that explore past mythologies with local political overtones really pushes material, social or curatorial boundaries, nor that it contributes to an Australian conversation about contemporary art.

In 2015 the NGA announced that it was creating a new department that would place its emphasis on work made post 2000, with a strong focus on digital engagement. The Department of Global Contemporary Practice was expected to provide content for the gallery’s contemporary annexe space, opened in 2014, and ultimately for a new NGA building.

But the momentum was short-lived, a Jenga tower that tumbled as it was being built. Only months after that announcement, the gallery’s contemporary annex space, located on Lake Burley Griffin, was closed, having operated for just 20-months (August 2014 – April 2016). It was a result of the Federal Government’s efficiency dividend, which represented a $3.9 million cut for the NGA over the ensuing two years. The new building was also put on hold.

Without an annexe or new building, NGA has a series of projects badged under the department to power its commitment to contemporary practice.

Rodel Tapaya’s 10-meter commissioned painting The promise land: the moon, the sun, the stars (2017), currently on show at the National Gallery of Australia; supplied courtesy the artist

Riding the high of Filipino art

Jaklyn Babington, NGA Senior Curator of Contemporary Art Practice heads up the Department, and curator of Tapaya’s exhibition, told ArtsHub the decision to focus on Tapaya was made because of the strength of current practice in The Philippines.

Babington, who admits she has never visited the Philippines, said, ‘Part of what we try to do in this department is to look at contemporary practice in Australia and the Asia Pacific. The Philippines was identified as a progressive and exciting scene. It was the Indonesian art scene a few years ago and now The Philippines is the hot place to be.’

But that is hardly news. Filipino artists have been the darling of the Asian art fair market for a good decade. Art Fair Philippines is one of a staggering 25 new art fairs established in Asia since 2000; there have been record hammer results for the region for a good 15 years; and surveys of contemporary Philippine art have been presented widely, from Austria to Berlin, New York to San Francisco, Singapore to Hong Kong.

Tapaya’s formula of provocatively combining folk-tone narrative with political messaging and contemporary overtones is a national signature. As far back as 1992, it could be seen in Manuel Ocampo’s inclusion in Documenta IX in Kassel Untitled (Burnt Out Europe), catching the eye of international curators.

To present Tapaya without this context of Filipino painting is like presenting an impressionist landscape in Australia without any mention of the Heidelberg School, ignoring a core element that is locked into our collective psyche as artists and art audiences.

But neither Tapaya himself nor Babington is keen to provide this context. When ArtsHub asked Tapaya how he saw his work fitting into this broader history of socio-political painting in the Philippines, his answer was that he rather turned to the Mexican muralists, a point quickly endorsed by Babington, who added that ‘Rodel wanted to differentiate himself’.

She continued: ‘Tapaya has established an intriguing literary-based visual practice, unique in its Filipino perspective yet striking for its participation in the rich history of Hispanic narrative painting. His flat application of paint, cramped figurative compositions and mix of decorative surface with political messaging immediately evokes the work of the Mexican muralists and surrealists such as José Clemente Orozco, Diego Rivera, David Alfaro Siqueiros and Frida Kahlo.’

One of Tapaya’s paintings in his newly commissioned survey exhibition at the NGA; supplied

A much longer history

Mosman Art Gallery has led the charge with this one, approaching the Art Gallery of NSW, Campbelltown Art Gallery, Blacktown Arts Centre, Peacock Gallery (Auburn), Museums & Galleries NSW – and the Australian Museum as a lending organisation – to stage a multi-programed project scheduled to open in July.

Rodel Tapaya’s NGA exhibition similarly uses that moment as a catalyst to advance its new Global Contemporary Department, though Babington sees it as much more about tapping in to a contemporary moment.

‘I know that right now we have the anniversary of the Australian-Philippine relationship, but also I think the Philippine contemporary art scene has developed to a level showing internationally and key dealers are taking notice,’ said Babington. ‘It is just a more developed art scene.’

Babington added enthusiastically: ‘I am surprised how many galleries are opening now in Manila. Even young artist can show in spaces.’

What the Senior Curator may have overlooked is that Manila is arguably one of the most sophisticated art scenes in all of Asia. The first commercial gallery was founded in Manila in 1950; the Phillipines first Biennale participation abroad was in 1953; and an award for art criticism was established in 1954. This has long been a fertile art scene.

Nor are these artists new to Australian audiences. As early as 1987 the first Artists Regional Exchange took place in Perth and Fremantle bringing out Filipino artists. Queensland Art Gallery’s inaugural Asia Pacific Triennial in 1993  identified contemporary Filipino art as an  important part of a regional survey, and that input continues to this day. The Biennale of Sydney has included Filipino artists in their contemporary dialogue as early as 1998, with Tapaya being the most recent inclusion in 2016. There were also several curated exhibitions of Filipino art that  toured nationally in the mid-late 1990s.

Heck, iconic painter Ian Fairweather first went to the Philippines in 1934 – to Davao actually, the Southern Provence of Mindanao where current President Rodrigo Duterte was former Mayor, where the militant Muslim stronghold remains active and where the political environment provides the foundation of Tapaya’s paintings. Fairweather returned several times, as have many Australian artists over the years, recognising the creative hot-spot that is the Philippines.

The Australia Centre set up in 1992 in Manila was a vital space that both brought Australian artists to the Philippines and supported the contemporary practice of Filipino artists. It was the hottest venue in town for about a decade.

Despite this vitality, Australian institutions have not seriously surveyed contemporary Filipino art beyond its cliché of socio-politically charged painting.

Leeroy New’s Puerta Del Laberinto at the Castlemaine Art Museum (17 to 26 March) as part of the Castlemaine State Festival and to coincide with Mutable Truths a decade of Filipino exchange with Bendigo.

Story candy is not curatorial leadership

While Tapaya’s paintings are technically adroit, ambitious in scale, and will be a sure audience-pleaser, they do not presented that level of challenge that Nithiyendran work proposed in the unveiling of this new department’s programming.

When ArtsHub questioned Tapaya on what the commission might contribute to Australian conversations, he was unable to answer.

‘I just want to enjoy painting; I combine these different stories and different elements of colour, line and harmony,’ he said. ‘I am not a political artist.’

The gallery sells a more political story, elaborating that several of the paintings in the exhibition were inspired by the 2015 Lumad killings in Mindanao, which is described as ‘a form of ethnocide’, with indigenous tribes from Mindanao killed by (Moro) rebels and the military.

This is good “story candy” for presenting work in a climate where we have nurtured audiences to expect to be told what they are seeing. But with that comes a responsibility to ensure that what is delivered is accurate and comprehensive, not just cherry picked for audience effect.

While everyone has their own point of reference when viewing art, presenting a survey of contemporary practice requires a more cognisant and alert reading of the context in which these paintings are made – especially if this is the first solo survey of an artist to be presented by a major institution.

The Philippines is an incredibly layered art scene and mere research-by-distance, or aggregated articles in art journals, is not sufficient to fully understand the nuances of this sophisticated market and scene, especially when presented by our nation’s premier institution.

The greatest signal of that institutional lack comes with a coincidence. Curiously NGA’s Tapaya exhibition opened the same week as another Filipino exhibition in Australia, one that included his wife, award-winning painter Marina Cruz.

Mutable Truths at the La Trobe University Visual Arts Centre (VAC) in Bendigo continues an annual Exhibition Exchange Partnership and Artist in Residence Program with the Ateneo de Manila University established in 2005, which has been supported with publication, talks and symposiums over the years.

This edition features ten artists who have won the prestigious Ateneo Award for a contemporary artists and have undertaken a residency in Bendigo: Poklong Anading, Martha Atienza, Lyle Buencamino, Charles Buenconsejo, Buen Calubayan, Marina Cruz, Kawayan de Guia, Leeroy New, Mark Salvatus and Ronald Ventura. The Award has grown to include residencies in Bendigo, Bandung (Indonesia), Singapore, New York and London. This is the Philippines’ own meter of what is shaping contemporary art practice there.

The larger art scene in Australia has largely ignored this decade long engagement with contemporary Filipino art, and the significance it has played in that art scene locally.

We need a bureaucratic date – a diplomatic anniversary – and a fashionable art market to act as a prompt for Australian curators to finally come up to speed with what the rest of the world, and many Australian artists independently, have recognised for decades.

Rodel Tapaya:  New work from the Philippines is showing 18 March – 20 August in
Contemporary galleries at the National Gallery of Australia, Canberra.