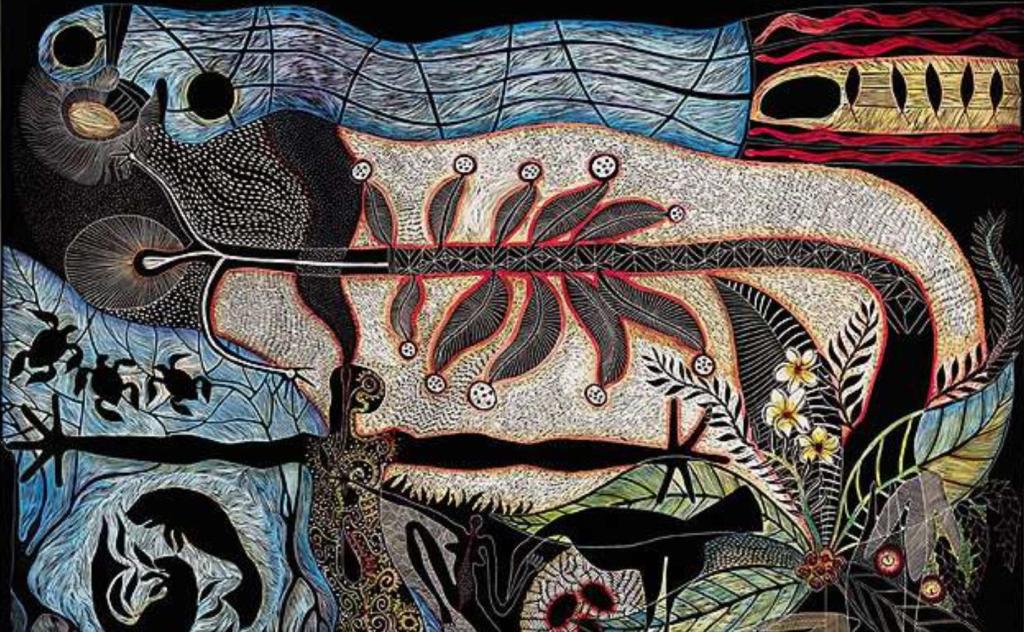 The Far North arts community has expressed their great sadness at the death last week (5 May) of Ku Ku Imidiji man, Arone Raymond Meeks, who died peacefully at Cairns Hospital after a short battle with cancer. He was 64.

Since 2017, Meeks had played a pivotal role on the Cairns Indigenous Art Fair (CAIF) Board of Directors, but his skill at brokering conversations and improving visibility for First Nations artists stretched back much further.

In a statement, CAIF said: ‘Arone is remembered as being one of Australia’s most important and prolific contemporary Indigenous artists. His impressive body of work stands as courageous studies into contemporary issues of sexuality, identity, land rights, and the re-telling of cultural stories and lore.’

Meeks was a founding member of Boomalli Aboriginal Artists Co-operative, the first Australian Indigenous artists collective created in response to a lack of engagement from mainstream cultural institutions and galleries with the work of urban-based Aboriginal artists.

Born in 1957, Meeks grew up in Yarrabah and El Arish, Mission Beach, Far North Queensland, although his country is the area around Laura, Cape York. He studied at City Art Institute in Sydney (now UNSW Art and Design), and after a period of extensive travel abroad, returned to the Blue Mountains (NSW).

It was only later, facing the death of his long-time partner, that Meeks returned to Queensland to study with various tribal elders, including those of the Lardil people of Mornington Island.

As well as a successful career as a painter, sculpture, printmaker, Meeks was commissioned to create many public artworks, and even illustrated a number of children’s books. His book Enora and the Black Crane won the 1992 UNICEF Ezra Jack Keats Award for International Excellence in Children’s Book Illustration.

He will be remembered for his wonderful sense for colour and design.

An exhibition of his recent work, punctuated by works in an intense ultramarine blue, Meeks’ signature colour, was due to open this week (14 May – 12 June) at Onespace Gallery, entitled Evidence.

Directors John Stafford and Jodie Cox said the exhibition would go ahead as a gesture to recognise and celebrate Meeks’ lasting influence.

‘Meeks has been a prominent cultural anchor in the region of Tropical North Queensland for many years, he has left an extraordinary artistic legacy and led an impressive life of social commitment in numerous areas such as teaching, health, and First Nations issues, all of which informed the breadth and depth of his art practice,’ Stafford and Cox said in a statement.

An artist activist with a big heart

They continued: ‘Through art, he shared his story and that of his community by interconnecting aboriginal culture, HIV and health promotion … His art was ground-breaking, giving a voice to those previously voiceless. Arone Meeks’ lasting legacy is a collection of artwork which will continue to have a profound impact on the way we understand the history of the HIV response in Australia.’

Meeks worked with the 2 Spirits program at the Queensland AIDS Council in Cairns, and was a proud teacher of Indigenous culture, delivering Certificate 3-4 in Aboriginal and Torres Strait Art Identify and Culture.

CIAF said: ‘Arone continuously experimented with new and additional mediums; often writ-large on sweeping prints, paintings and public art installations. Arone was also a teacher, a staunch advocate for the arts, and a generous supporter of Queensland’s Indigenous artists and communities.’

While his view was foremost a celebration of his community and culture, Meeks also celebrated the messages and joy of sharing culture through travel.

He was awarded an Australia Council Fellowship in 1989 to study in Paris, and went on to exhibit throughout Europe, North and South America, the UK, and for an extended period in India.

He said of that time: ‘My experience of travel contributed a huge amount to my vision of my art-making and where I might develop and explore new symbology and language in my work.’

Meeks began printmaking in 1982 in collaboration with printmaker Theo Tremblay, and was also deeply influenced by his participation in a cultural exchange to Santa Fe (USA), during the 1990s.

‘The directness and fluid qualities have made it possible to introduce a freshness and immediacy to my work.  I began to create a new language of symbols through this process’, he said of printmaking.

Meeks was directly impacted by AIDS, losing his long-time partner to the disease in the mid 1980s. It was a period when his art making took a dark turn, and he stopped painting for an extended period. But it was a sell-out show that reignited his need to share his culture and stories.

‘It proved to me that I was not alone, and I wasn’t the only one going through this’, Meeks reflected in an article for AFAO (the Australian Federation of AIDS Organisations).

‘… my passion of the last four years has been one of sharing the skills, knowledge and stories of my arts practice with Indigenous and non- Indigenous communities. This is done through mentoring, teaching, sharing – and me listening, learning and creating an environment that nurtures and cares about culture, community and self-expression’, he continued in that 2014 article.

Meeks is mourned by his partner and fellow artist of 20 years and his extended family.