Across his 42 year career, Ginivan was committed to providing quality musical theatre for children and families as well as opportunities and work for actors and crew.
Richard Watts 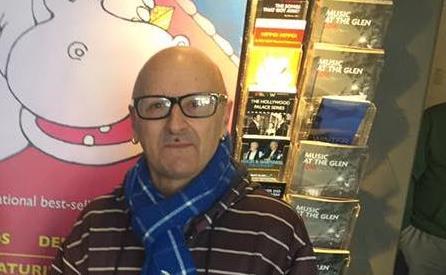 Garry Ginivan during the 2016 tour of Hippo! Hippo! A Big New Musical Adventure!, based on Hazel Edwards’ There’s A Hippopotamus on Our Roof Eating Cake. Image via Facebook.

Described by those who knew him as passionate, supportive, determined, cheeky, complex, and a logistical genius, Ginivan’s company, Garry Ginivan Attractions, adapted and toured a range of stage works for young people from 1987 onwards, providing many young people with their first ever experience of live theatre. A previous iteration of his production company operated under the name Rainbow Management from the early 1980s.

His epic and ambitious tours, which could run for many months at a time, included productions of Possum Magic The Musical, Wombat Stew, Stripey – the emu chick!, Peter Rabbit, We’re Going on a Bear Hunt and My Grandma lived in Gooligulch.

A no-nonsense professional, Ginivan was a ‘truly unique, old school vaudevillian soul, who never lost a beautiful connection with his inner child,’ according to actor, singer and writer Karlis Zaid.

Prior to working as a producer, Ginivan was an actor himself, appearing in a range of musical theatre productions including the original Australian production of Cats. Even in auditions his determined approach to performance was evident, according to former musical director and performer-turned-teacher, Will Conyers.

‘Many performers search and search for the “just right” audition song. Not Garry Ginivan,’ Conyers recalled.

‘It didn’t matter what audition Garry was going for, A Chorus Line, Evita, Fiddler on the Roof, he always used the same audition song.

Conyers added: ‘The industry is forever in your debt, dear Garry. Almost single-handedly, you forged the audiences that our producers now enjoy. You discovered and supported many a career also … I’m pretty sure I join with many when I say, we’ve lost a limb; a passionate theatrical life-blood.’

As a producer, Ginivan’s tours were often the entry point to professional practice for many young actors and provided a number of them with ongoing work across multiple return seasons. Ginivan himself once described ‘giving young talent a go’ as ‘my life’s work’.

His contribution to the sector was recognised at the 2004 Drover Awards, with Ginivan award the status of Touring Legend by the Australian Performing Arts Centres Association (now Performing Arts Connections Australia).

Rob Robson, Chair of the Victorian Association of Performing Arts Centres and an experienced presenter, said: ‘The loss of Garry Ginivan leaves empty shoes to fill, as big as the two huge boots of Mr McGregor in Garry’s production of Peter Rabbit.’

He continued: ‘Over the years, with works like Possum Magic, Wombat Stew, My Grandma Lives in Gooligulch and so many more, Garry provided shows which brought popular and well-loved stories leaping off the page. The productions were bright, colourful, full of music and fun, and always respectful of the source material. His productions inspired in young people both a love of Australian literature and a love of live theatre; indeed, for so many young people, Garry’s shows would have been their first ever experience inside our theatres, and we trusted Garry implicitly to provide the very best experience for them to begin on.’

Robson described Ginivan as a ‘hands on’ producer who always worked closely with the cast and crew to bump in a production in order to ensure it was always up to his exacting standards.

‘He knew his audience by direct experience and he never spoke down to children in the shows he produced,’ Robson continued.

‘The more recent times his shows have been through our venue, I have noted mums, dads and teachers bringing the children to experience the same productions they themselves experienced all those years ago. Yet his shows always remained fresh, not least because Garry also provided so many opportunities for budding young performers in his casts.’

He added: ‘Children deserve to have the best of theatre created especially for them in just the same way as adult audiences, and Garry Ginivan will be remembered as someone who was totally committed to doing just that.’

‘Children deserve to have the best of theatre created especially for them in just the same way as adult audiences, and Garry Ginivan will be remembered as someone who was totally committed to doing just that.’

Rosie Dwyer, Senior Manager, Programming at Regional Arts Victoria, said, ‘Garry Ginivan was a centrepiece of Regional Arts Victoria’s touring program from 2010 – 2017. Over this period we supported him to tour eight productions nationally, to almost every possible location you can go in Australia. Over this time his creative genius delighted over 318,000 people across the country, and supported 62 artists and production staff, many of whom have highly successful careers.

‘Whilst his loss will be keenly felt at Regional Arts Victoria and throughout regional Australia, he leaves behind an extraordinary legacy. Our thoughts are with Garry’s family at this sad time,’ she added.

Ginivan produced over 30 tours and 100 productions across his career, with his production of Possum Magic becoming Australia’s longest running and most successful musical, according to a statement released by peak body Live Performance Australia (LPA).

‘As a creator of new works, jobs and opportunities, Garry Ginivan was a trailblazer in Australian theatre. He set new standards and promoted the growth of theatre throughout Australia. Garry was one of the unheralded greats of Australia’s live performance industry. His extraordinary talents and herculean efforts as a producer inspired fellow practitioners and helped shape the vibrant and burgeoning industry that exists today,’ LPA’s statement read.

‘Garry wasn’t just a producer. He was a mentor, a constant source of inspiration and an example that giving your best wasn’t exclusive to what happens on stage. It was about offering your best as a human being. Working for, or alongside, Garry was always a learning experience; a masterclass on the craft of theatre and decency. He treated everyone who worked on his shows equally, with dignity and respect, right through to all in-house crew at the theatres where his shows played.’

Ginivan is survived by his partner Stephen.