Works have begun to re-construct Melbourne’s historic La Mama Theatre after a fire tore through the heritage listed building in 2018 due to an electrical fault.
Andrea Simpson 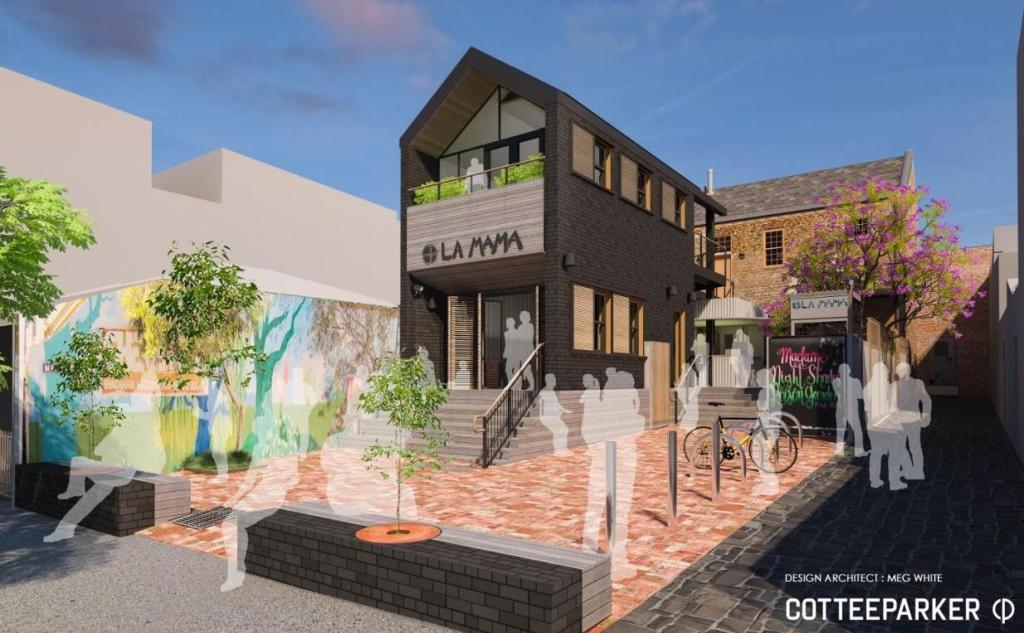 After a long two years, many hurdles and an uncertain 2020, the iconic La Mama Theatre on Faraday Street, Carlton is now officially a building site.

Over $3.2 million was raised through a successful fundraiser in which the State Government, a philanthropic alliance, and generosity from the public who opened their hearts and their wallets to support the iconic venue.

Co-CEO and Company Manager Caitlin Dullard told ArtsHub: ‘Rebuilding kickstarts our future. It reminds us of the backing of our generous community who have got us this far with their donations and support, it allows us to go back to programming both venues, creating so many more opportunities for artists, and the expanded design of the new space invites us to reimagine the possibilities of risk-taking intimate theatre.

‘We are acutely aware that the Australian arts community is creative, resilient and itching for a place to make their work and it delights us that the old spirit and values of La Mama will be alive and thriving in whatever this new world brings,’ Dullard said.

Works were started on 12 August with all funds raised going towards the rebuild. The team confirmed to take on this project include Lead Architect Meg White and Architects for Documentation and Construction Services: Cottee Parker Architects with builder the Chroma Group. To maintain the heritage of the building Allan Willingham will also contribute on La Mama’s architectural history.

A new purpose-built building will nestle in front of the rebuilt theatre to complement the main site. This will provide a much-needed rehearsal space and facilities for artists and staff.

Unique features like the internal staircase, fireplace and trapdoor will be retained and re-imagined in the rebuild design for the Faraday Street site.

The project will also improve accessibility and amenity across the whole site, and considers environmental impact with solar panels, a water tank and double glazing.

At approximately 5am Saturday 19 May 2018, La Mama Theatre was engulfed in flames with over 50 firefighters in 18 trucks called to Faraday Street to put out the fire.

The cause of the fire was later determined as an electrical fault. At the time, La Mama’s Artistic Director, Liz Jones, said ‘it was an enormous relief’ to learn that the fire was not started deliberately.

A fundraiser was started to help with the enormous rebuild. And in November 2018 the State Government kicked off La Mama Theatre’s fundraising campaign with a $1 million grant.

‘La Mama has contributed so much to our creative industries and to our cultural life – backing artists, creative risk-taking and ideas since the 1960s,’ said Minister for Creative Industries Martin Foley at the time.

‘The passion, commitment and resilience of this place, and the people behind it, has shone through over the last six months and I hope this $1 million helps La Mama get back on its feet and return stronger than ever,’ he added.

The road to recovery was marked on 22 November, 2019 with a ‘turning of the sod’ ceremony held 18 months after the fire and heralding the beginning of the theatre’s rebuild.

La Mama Theatre is expected to reopen in 2021.