Carlton's legendary La Mama Theatre, which last year celebrated its 50th anniversary, has been devastated by fire.
Richard Watts
[This is archived content and may not display in the originally intended format.] 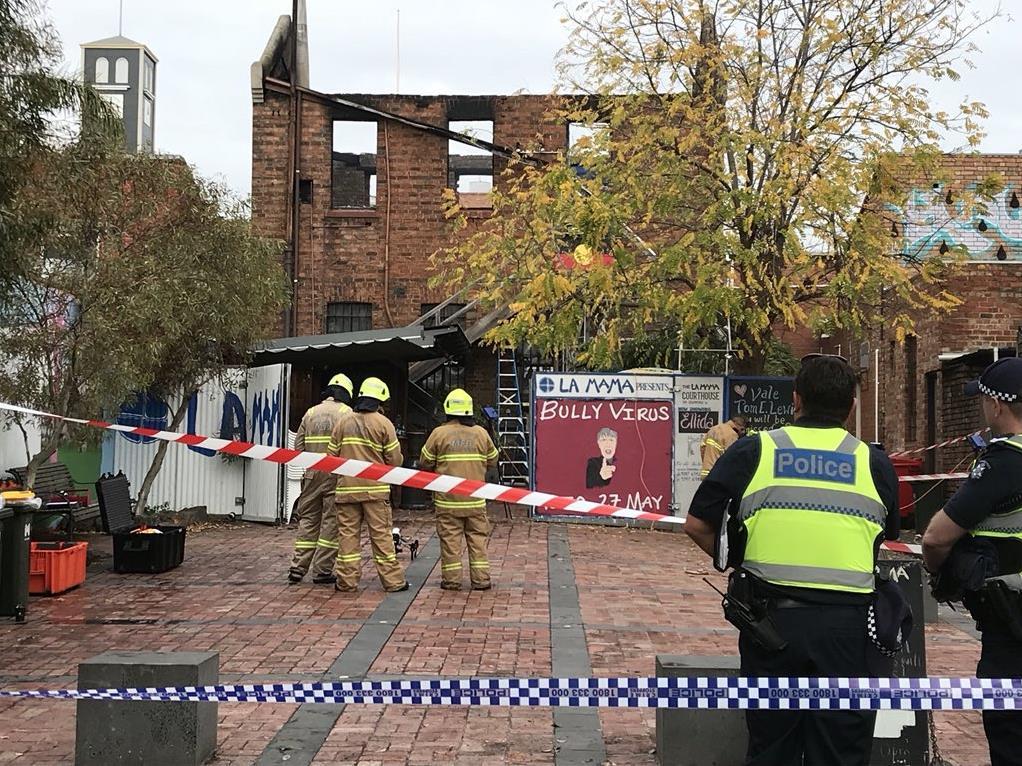 The Australian theatre sector woke on Saturday morning to the news that Carlton’s La Mama Theatre, one of the country’s most significant cultural icons, has been devastated by fire.

The Age reports that over 50 firefighters in 18 trucks were called to Faraday Street, Carlton at approximately 5am Saturday, where the two-storey theatre was ablaze.

While the fire has since been brought under control, the brick building which houses the ground floor theatre and the office-cum-dressing room on the first floor has been badly damaged.

The interior floor and staircase, and the slate roof have collapsed. External buildings such as the bar appear relatively unscathed. All office fittings, records, artworks and many hundreds of scripts have been lost.

Thankfully, the majority of La Mama’s archives – documenting 50 years of independent theatre – were donated to Melbourne University in 2017, as part of the theatre’s 50th anniversary celebrations.

Smoke was still rising from the burnt-out shell of the building at 10am Saturday as shocked staff and volunteers gathered in the street. Despite the damage, plans are already underway to ensure that upcoming productions are not interrupted – the weekend’s performances of Bully Virus were staged at the nearby Kathleen Syme Library and Community Centre, with a venue for the remainder of the season still being sought at the time of writing.

Offers of assistance have flooded in from across Melbourne, and messages of support from across the country. 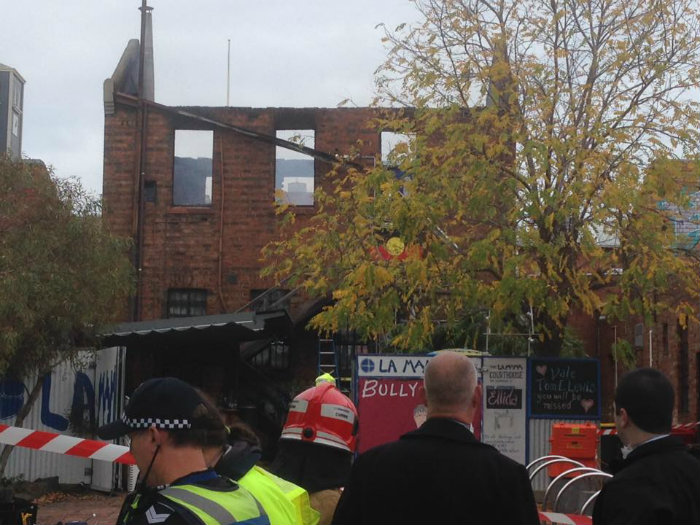 The structural integrity of what remains of the building is not yet known. Nonetheless, La Mama staff and management were relatively upbeat this morning, buoyed by the messages of support and offers of assistance that have flooded in from across the cultural sector.

La Mama’s long-serving Artistic Director, Liz Jones, said, ‘Think restoration, not devastation. At times like this it’s important to let people know that La Mama doesn’t just have a past – it has a future.’

Company Manager Caitlin Dullard added: ‘While we’re devastated we will move on. We’re upset but we’re resilient, and we’re not going anywhere.’

Dullard also thanked everyone who has been in touch to offer support. ‘It’s very warming and we feel very loved,’ she said.

Sue Broadway, Chair of La Mama’s Committee of Management, told ArtsHub: ”While we are shocked, we know that the Australian theatre community will rally behind us. The full extent of the damage is not yet known, but once we have details, we are determined to rebuild. La Mama has 50 years of history behind it and we’re not going to let a fire stop us from supporting adventurous theatre-makers for another 50 years to come.’

Read: The little theatre that could: 50 years of La Mama

La Mama’s first production was staged in late July 1967. The theatre is widely acknowledged as one of the most significant contributors to the Australian cultural landscape.

Described by its founder Betty Burstall as ‘essentially a playwright’s theatre, a place where new ideas, new ways of expression can be tried out, a place were you can hear what people are thinking and feeling’, La Mama is the home of alternative and experimental local theatre.

Responses to the fire from the sector have been swift and immediate.

@MelbTheatreCo is saddened by the news and has reached to @LaMamaTheatre to offer any assistance now and in the future. @brettsheehy https://t.co/gvvy67IShP

Devastating news about #LaMama. Sending all our love and thoughts to the @LaMamaTheatre family.

Terrible, terrible news. La Mama is the birthplace of so much important work. So so sorry @LaMamaTheatre. https://t.co/pnx6gMtmav

This affects Sydney – and all of Australian theatre – so many good wishes for La Mama’s rise from the ashes. #LaMama pic.twitter.com/E8KClXOGqW

Horrific news. We are sending our love to Liz and the entire La Mama family. https://t.co/W4NUcuLzJ8

Waking up to hear La Mama has been destroyed by a fire. That venue means so much to Melbourne Theatre, the loss is unimaginable. I dearly hope it can be rebuilt.

Shocking news about La Mama. Our hearts and thought go out to everyone. Our entire community will be affected by this 😢😢😢

Sending our love to the @LaMamaTheatre family this morning as we wake up to the devastating news.https://t.co/gtQmUDuwLo

Devastated that @LaMamaTheatre has been severely damaged by fire #lamama has been home to the community of artists for over 51 years. We offer our support, our founding and current ADs are amongst the huge alumni. To Liz and the team at La Mama, thinking of you all.

Staff of La Mama responded in a tweet of their own:

Thank you everyone for your support and thoughts – we sincerely appreciate it. Our staff are on site working through it together. We will update everyone in due time.
With so much gratitude and appreciations, La Mama and all. pic.twitter.com/iW6Zqla2hm

La Mama is currently in the midst of a fundraising campaign to ensure its performances are accessible to all. Additional fundraising initiatives will doubtless be announced once the future of the Carlton building is known.

Freelance director Leticia Cáceres said it best: ‘Start putting your pennies aside friends. We have a theatre to rebuild.’

Disclaimer: The author is the Deputy Chair of La Mama’s volunteer Committee of Management.