Fifty monologues reflecting on the challenges and opportunities facing Australians as we emerge from lockdown will serve as an invaluable snapshot of this unique moment in time.
Richard Watts 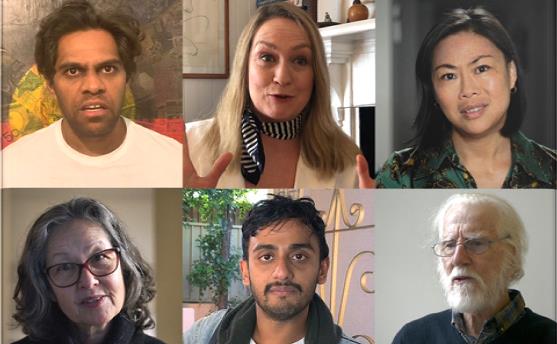 Some of the performers participating in Dear Australia. Image supplied.

Inspired by the Abbey Theatre’s Dear Ireland project, Playwriting Australia’s (PWA) Dear Australia is envisaged as a series of theatrical postcards giving voice to the hopes and fears of Australians as the country begins to recover from the impact of COVID-19.

‘I hope it will be a really potent record of the time; a snapshot that will give us a glimpse of all these voices around Australia and what they’re observing and what they’re thinking – not only about the present moment, but about the future,’ said David Berthold, interim Executive Chair of Playwriting Australia.

Unlike much of the streamed content keeping us entertained in lockdown, the short plays created for the project are new and of the moment.

‘There’s a whole raft of work being online from various organisations and theatre companies, which is all terrific. But not a lot of it is actually directly addressing the times,’ Berthold said.

Presented in collaboration with 25 small to medium theatre companies across Australia, each of which were asked to nominate two playwrights for the project, PWA then commissioned those 50 playwrights to each write a short monologue, which were then filmed by 50 Australian actors, many in their own homes.

The 50 monologues have been performed by such actors as Belinda McClory, Pacharo Mzembe, Jack Thompson, Miranda Tapsell, James Majoos, Marco Chiappi and Elaine Crombie and will be livestreamed over three nights in July.

Read: New organisation to rise from the ashes of Playwriting Australia

Unlike the Dear Ireland project, which was driven by Ireland’s national theatre company, the decision to work with 25 small to medium theatre companies gave Dear Australia a very different focus, Berthold explained.

‘There’s no Melbourne Theatre Company or Sydney Theatre Company or anything in the mix. They’re all small to mediums and spread right across the country. And that was a deliberate choice to amplify whatever voices that those 25 companies were interested in.’ he said.

‘The thing that I found most extraordinary, when that list of 50 playwrights landed, was how effortlessly diverse it was. Such high First Nations representation, really high representation of culturally and linguistically diverse voices, a lot of emerging voices; some senior voices as well. Some writers, perhaps, who mainstream audiences wouldn’t have heard of before. It’s certainly not a list of playwrights I could ever have come up with,’ Berthold said.

Adelaide-based playwright Elena Carapetis is one of the 50 writers chosen to write a monologue for Dear Australia.

‘I was really chuffed to have been nominated by Rosemary Myers and her team at Windmill Theatre as a playwright for the Dear Australia project – I have loved working with them in the past as an actor,’ she told ArtsHub.

‘What Playwriting Australia  have set out to do with this project is so admirable. Not only are they providing work for artists in Covid times, but they are also giving us a chance to use our voices. This is especially significant in a climate where our current leadership seems intent on downgrading the importance of the arts. So, I feel a great privilege to have this platform and to stand alongside other artists whom I admire greatly. I can’t wait to watch the work everyone’s made,’ Carapetis said.

‘What Playwriting Australia  have set out to do with this project is so admirable. Not only are they providing work for artists in Covid times, but they are also giving us a chance to use our voices.’

‘It’s great to see Playwriting Australia and Australian Plays collaborating closely on this venture, to produce and publish 50 new Australian monologues and giving playwrights and actors much needed paid work at this uncertain time,’ Butler said.

‘My piece Threshold is performed by the inimitable Roxanne McDonald. She’s plays Aurora; Planet Earth. And Earth is tired of all this humanity. They’re greedy and self-serving; blind and deaf to all her warnings. Threshold is the moment where Aurora finally takes the action she needs to protect herself from homo sapiens; using the full force of her natural powers and innate intelligence to do so,’ said Butler.

‘Art Centre Melbourne got wind of the idea and helped us draw together that second level of partnership there with the major performing arts centres. And I think that’s fascinating,’ Berthold said.

‘On one hand you’ve got these 25 small to medium organisations from right round the country. And then you’ve got the big centres there at the other end, as it were, and all working in utter harmony to deliver and promote this event. I can’t think of another manifestation of theatre in Australia that’s had such an extraordinary coalition of forces working towards a common goal.’

Just as the pandemic has encouraged governments and individuals alike to reimagine what the future might look like, so too have the playwrights had free reign to interpret such optimism through their scripts.

‘It is clear to me that so many things are up for grabs in society at the moment,’ Berthold said. ‘Working from home, universal basic income, increases to JobSeeker and how we think of the dole, all these sorts of things that three months ago seemed kind of impossible to break down are now there to be re-examined, because we’ve discovered that we can re-examine things. So a lot of these 50 stories actually poke at some of those questions and suggest ways forward,’ he explained.

‘Interestingly, in my mind, there’s a profound connection between the pandemic and this latest wave of Black Lives Matter … That in this moment, when our thinking is open and raw and ready to accept change, George Floyd’s death opened up this big question again in a way that was probably bigger than it might have been if we hadn’t have had the pandemic. I think the two events are profoundly connected,’ Berthold added.

‘And most of them in one way or another are dealing with the little cracks that have opened up in the world but in really perceptive ways. Each of these 50 stories have so precisely calibrated. It’s been a real thrill.’

As part of the project, Sydney Opera House will host a panel discussion on Saturday 4 July at 7pm. The Dear Australia scripts will published by Australian Plays after the event, available online from Monday 6 July.