Tributes flow in for the ‘musical giant’ who passed away in a Sydney hospital on Friday morning.
Performing Arts Editor 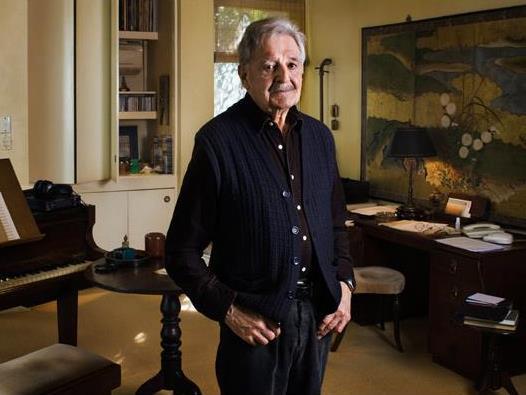 Among the first to pay tribute to Sculthorpe were Prime Minister Tony Abbott and Federal Arts Minister George Brandis QC.

‘Today, Australia lost a musical giant with the passing of composer Peter Sculthorpe AO OBE,’ they said in a joint statement on Friday evening.

‘His ‘Sun Music’ series of compositions from the 1960s was the dawning of the first identifiably Australian sound in classical music. Peter Sculthorpe sought to render into music the earth, sea, sky and history of our country. He influenced audiences and musicians around the world, and he was a deeply respected mentor and teacher to subsequent generations of composers.

‘Peter Sculthorpe much deepened Australia’s musical voice and our country is forever richer because of him,’ they said.

Dr Michael Spence, Vice Chancellor, The University of Sydney, where Sculthorpe was Emeritus Professor,
called him ‘an outstanding composer and a delightful man’, adding ‘Professor Sculthorpe is such a huge loss, but at the same time he leaves such a big music legacy’.

Dr Karl Kramer, Dean of the Sydney Conservatorium of Music, said: ‘Peter is Australia’s best-known composer not only at home but internationally. He was the first Australian composer to develop what many heard as an “Australian” sound and has been described as “the voice of Australia” and “Australia’s representative composer”.’

Sydney Symphony Orchestra Managing Director Rory Jeffes said Sculthorpe was a respected cultural ambassador with a unique talent for conveying the spirit and landscape of this country through his music.

‘As a way to honour Sculthorpe and the contribution he made to Australian cultural life, our Chief Conductor and Artistic Director David Robertson and the musicians of the SSO will perform Sculthorpe’s Memento Mori as an encore at each of our performances this coming week at the Sydney Opera House,’ Jeffes said.

The SSO will also dedicate these three concerts to Sculthorpe. ‘We are all deeply saddened to have lost this national treasure, but his contribution to the music community is imperishable. Our hearts go out to Peter Sculthorpe’s loved ones at this time,’ Jeffes said.

Queensland Symphony Orchestra also paid tribute, with QSO Concertmaster Warwick Adeney saying: ‘Batons around the world should be lowered this week to pay tribute to an extraordinary composer and musician, one who sought inspiration and truth in the Australian landscape and somehow translated what he saw and heard and felt into the most wonderful, critically-acclaimed pieces. It is music that has already moved generations, and will always.’

Adeney said Sculthorpe’s music was integral to the QSO’s repertoire. ‘We have always loved and played Peter Sculthorpe’s works, for 30 years or more; and we will continue to do so. It’s testament to his incredible talent and vision.’

Born in Invermay near Launceston, Tasmania in 1929, Sculthorpe studied first at Launceston Church Grammar School, then Melbourne University, and Wadham College, Oxford in the UK.

It was not until he returned to Australia in 1961 that his career began its meteoric rise.

Sculthorpe’s catalogue consists of more than 350 works.  While his best known works include the orchestral pieces Mangrove (1979) and Kakadu (1988), he wrote in many genres from solos to opera. His 18 string quartets are especially frequently performed and the Kronos Quartet toured the world playing No.8. In Australia he became a major public figure, audiences cheering his work as it seemed to say something necessary in the life of a country finding a new voice after the dissolution of the British Empire.

The frequent Australian cry to turn to Asia in the 1960s and 70s was paralleled by influences from Indonesia and Japan in Sculthorpe’s works, as he strove to write music expressive of the Pacific region.

He was an inspiring teacher as well as a composer, with the likes of composers Ross Edwards, Anne Boyd, Barry Conyngham and Matthew Hindson among his former students. He said in a 1994 interview: ‘I love teaching and I love writing music, and I have found in the past that whenever I’ve taken time off from teaching, I have, in fact, written no more music.  I think the more one does, the more one does.’

The impact of Sculthorpe’s composition on Australian music has been the subject of four books, including Graeme Skinner’s authorised biography, Peter Sculthorpe: The Making of an Australian Composer (1929-1974) published in 2007.

The recipient of many prestigious awards, Sculthorpe regarded the most important as being chosen as one of Australia’s 100 Living National Treasures in 1997 (National Trust of Australia). He was also declared a Distinguished Artist 2001 (International Society for the Performing Arts), Honorary Foreign Life Member in 2003 (American Academy of Arts and Letters) and one of the 100 Most Influential Australians in 2006 (The Bulletin magazine).