A former contestant of Big Brother Africa is setting his sights on a political career as a member of Ghana's next government.
ArtsHub
[This is archived content and may not display in the originally intended format.] 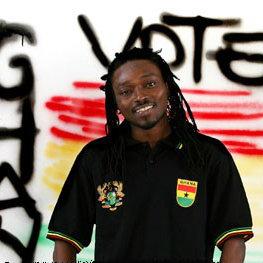 Big Brother has attracted many fame hounds across the world throughout its history, but few go in seeking a career in politics. Indeed, it might be arguable that the often-juvenile antics Big Brother contestants get up to in front of millions could be seen as the ultimate deal breaker for a political career. But that hasn’t stopped George Tetteh Wayoe.

Wayoe, from Ghana, was a contestant in the 4th series of Big Brother Africa – titled Big Brother Revolution – in 2009. Known to housemates and viewers as Ras Wayo, he didn’t last long in the house however, with his strong political opinions on almost everything alienating many and resulting in his eviction at the end of the first week of the competition. With his distinctive dreadlocks, the avowed Rastafarian and pan-African polarised the show’s viewers, and his early elimination marked him as Ghana’s worst performing contestant in the series.