South Australian artist Kate Bohunnis has won the Ramsay with a kinetic sculpture that explores the oscillation between function and dysfunction, following a year when chaos reigned.
Gina Fairley 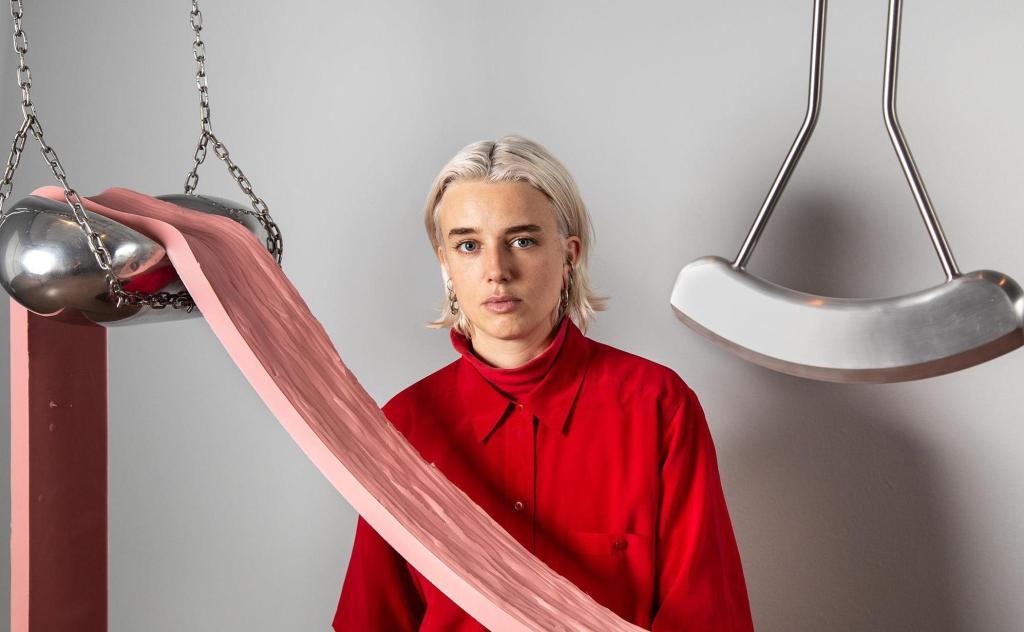 Announced today, the $100,000 Ramsay Art Prize has quickly become one of Australia’s most prestigious contemporary art prizes. 30-year-old South Australian artist Kate Bohunnis has been named the winner for 2021 for her work edges of excess.

This year marks the Prize’s third edition, presented by the Art Gallery of South Australia (AGSA).

A kinetic sculpture, edges of excess is keenly in step with the Prize’s reputation for what AGSA Director Rhana Devenport described as ‘an incredible cavalcade of materiality, of depth and expression reflecting our times’.

Bohunnis’ work combines metal framing and a pendulum that swings over a slumped flesh-like form made from silicone. The sculpture references divination tools used in spiritual healing, which she was introduced to as a child.

Over 350 artists entered the prize, which is held every two years. The winning work is acquired into the AGSA’s collection. Twenty four finalists are now on show at the Gallery, selected by Wiradjuri artist Karla Dickens; Daniel Mudie Cunningham, Director of Programs at Carriageworks; and Rebecca Evans, Curator of Decorative Arts & Design at AGSA.

Mudie Cunningham described Bohunnis’s work as conceptually rigorous and technically resolved. ‘Edges of excess speaks to the precarity of our times. It is a visceral portrait of both wellness and anxiety. It is a work full of contradiction.’

He made the point that ‘more than half the artists I didn’t actually know, and that is very exciting, which speaks to the diversity and rigour of new talent in Australia right now.

Bohunnis, who is currently unrepresented, spoke with ArtsHub about her win.

What’s the work about?

What is distinctive to this work is its very visceral fleshiness that feels elastic and organic against the mechanical sway of the pendulum – its sound adding a metronome quality, checking time. A strand of silicon is suspended, like a piece of gum on a hot summers day, its languid playfulness thrown into harsh contrast as axe swings above.

Bohunnis said the silicon stood in for ‘a body, my body, any body’, adding that ‘as a child my mother used the pendulum as a a tool for divination. It was about pathfinding, a way of healing the body and centering ourselves and make decisions,’

She continued: ‘That was very alluring for me. In the beginning it was very productive but it became a tool that bred anxiety and disempowerment with overuse … It became risk-indulgent.’

She speaks about her kinetic sculpture inviting the viewer to consider the tipping point between function and dysfunction – a feeling that most of us have felt at some point in the past year.

‘The work is about that moment where I found myself not being able to make important decisions for myself – it’s a lesson I’m still learning. To not give over, to not be so attracted to something that seems magic.’

The tumult of the last year meant that many of us were forced to face our own identities, and that idea of function and dysfunction became a lucid reality. When asked whether recent events impacted her winning work, Bohunnis told ArtsHub:  ‘Last year very challenging but I have been in a lucky position in South Australia in some ways. Of course, that moment of the past year, when new struggles have come in and trying to work out in my [practice]. I kept asking, “Am I absolutely mad? Should I be making smarter decisions?”, but for me I rather stick to what I do and see it through.’

We see that tenuous position in the way the axe blade swings precariously over the slumped ‘body’ in Bohunnis’ piece.  It’s a resonance that can been seen across many of the finalists’ works on show.

Much of Bohunnis’ work also focuses on identity, gender and queer perspectives, explained the gallery, connecting materials with psychological states and behaviours.

‘Where possible I like to find my own way, sidestepping traditional teachings or methods to encounter freedom,’ she said. ‘I like to be open to all materials.’

Bohunnis said that early on she played with electro-magnets, but it was only with the help of fellow artists that she found the resolve in her practice, noting how valuable relationships are.

Examining the productive power of not knowing in the pursuit of an inventive passage, Bohunnis’s installations call into question one’s inclination to self-define, residing only within the restrictive parameters of what is known of ourselves, she adds on her website.

When asked how the $100,000 win would impact her practice, she said, ‘I will just keep making my work. Up to now I was not sure how I would do that, so that was quite stressful.’

She added that it has taken her ‘a bit to get to know what I’m doing. It will give me a focus; I will continue working hard and labour on it. This is obviously a life-changing moment for an artist.’

Devenport said the Ramsay Prize is unique as it is only offered to artists under 40 years of age and at a nascent and important part of their career, adding that the Prize is offered in perpetuity and will reflect the zeitgeist of artistic practice in this country.

After majoring in printmaking at Adelaide College of the Arts, Bohunnis studied honours at Flinders University and started to incorporate metal fabricating, mould making, movement, textiles and sound into her artwork.  She is based in Tarntanya (Adelaide).

About the Ramsay Art Prize

The People’s Choice Prize is a non-acquisitive cash prize of $15,000 chosen by a public vote and announced on Friday 13 August 2021.

The author visited Adelaide as a guest of the Art Gallery of South Australia.